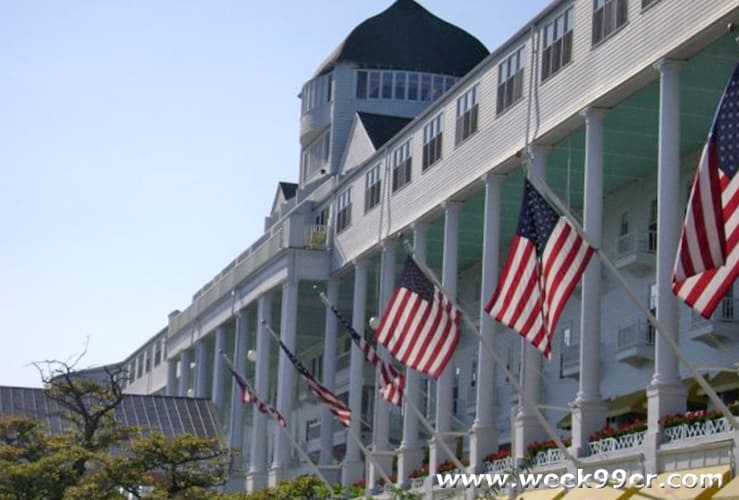 We’re going back to the archives on this one, to the filming locations of the 1980 movie Somewhere in Time. If you live in Michigan, there’s pretty much no shock about most of the filming locations were here in Michigan. The movie takes place and was filmed almost exclusively on Mackinac Island. There were some additional locations that were shot in Chicago as well. But the island up north was the perfect location for the movie for so many reasons that many fans don’t know about.

Why was Mackinaw Island Perfect for an old Time style film?

The Island was one of the first settlements up north by Jacques Marquette and is the state’s first National Parks. It is had one of the first forts in the state of Michigan that was pivotal to many military battles. And around that fort sprung up the iconic Victorian architecture that still draws tourists to this day. Mackinac Island has a rich history with local Indigenous tribes as well as early settlers and even has a bit of a twisted history with witch trials and even a period of a cult living on a portion of the island. But only one of those will play into the creation of Somewhere in Time.

But Mackinac Island’s location and old-world charm keep it insulated in a bubble of sorts. Tourist season sees the bulk of the activity on the island, but during the cold months the local population drops down to about 600 or fewer people, who use the naturally created Ice Bridge to cross to the mainland and bring the supplies they need, and even Amazon deliveries that are still made by horse and buggy.

Yes, that’s correct – it’s not just part of the movie – the island doesn’t allow cars to be on it. With the exception of emergency vehicles, the island guests and residents use horses and buggy’s to get around. How is that not perfect for a movie in the past when cars are limited?

And before we get any questions – yes, there is a car in Somewhere in Time, but it was brought over for the film and then removed. Unless it’s an Emergency vehicle or a snowmobile for ease of use in the winter months, you won’t be able to call a traditional cab on the island. During the tourist season, calling a cab is a $5 ride on a horse and trailer that will take you wherever you want on the island – and pretty much always will be a rideshare situation.

So where are the filming locations on the Island?

The simple answer – all over the Island. But if you love the movie, there are a lot of places you can go and get photos and recreate some of your favorite scenes. From the Gazebo, located a short walk from the Fort to the Grand Hotel where most of the interior shots and the iconic porch with rocking chairs. Street scenes and more were filmed throughout the island – the architecture was already perfect for the period piece. Most of these locations are free to visit, but the Grand Hotel will have a fee to enter, explore and visit the porch. However, if you’re going to pay the fee – it may be worth having a meal or dessert there.

Another important location in the movie was filmed and so much more at Mission Point – an area that has such an interesting history that it probably could be a movie of its own. Mission Point is home to the Drowning Pool, a purportedly haunted location today. The lagoon was where 7 women, accused of Witchcraft in the late 1700s were drowned to prove if they were witches or not. Their ghosts supposedly still haunt the spot.

So How Does a Cult Play into the Creation of Somewhere in Time?

But ghosts aren’t the only thing Mission Point once was the home of the Moral Re-Armament (MRA) an international moral and spiritual movement that, in 1938, developed from American minister Frank Buchman‘s Oxford Group. Buchman headed MRA for 23 years until his death in 1961. In 2001, the movement was renamed Initiatives of Change. While the religion is still practiced by some today, some on the island consider their practices and exclusionary behavior cult like.

What we know today as Mission Point Resort was the home of this religious movement, and a compound for it’s members. The property offered housing, schooling and even entertainment venues for the church. This included not only a movie theater to enjoy the films for their religion but a full sound stage so they could film and edit their own films and things for their congregation.

The propery was purchased by the current owners of Mission Point Resort in 1977 offering guests spectacular views as well as five restaurants, guest space, swimming pools and hot tubs, a full service spa, health club, 18 hole putting course, an arcade, bike rentals, a movie theater, tennis courts and a complimentary kids club. But it was what was left behind by the MRA that made the island even more desireable for filmmakers – not only could they shoot the film on the island but they could edit it there too. Make it a one stop shop and reducing the costs of production of this iconic film.