Growing up surrounded by water, many of us dream of living the island life. Being able to sit on our porch, listening to the waves crash while we relax. It’s a different life, a slower pace and one that if you’re lucky enough you can get a taste of when you stay on Mackinac Island. The truly lucky have their own place on the idyllic island and for generations have called the island (in the very least) their summer home.

At the top of the hill above the city sits the Governor’s House, The Captain’s Quarters and several other homes associated with the working of Fort Mackinac. And down the road, you’ll find the East Bluff, a strip of picturesque Victorian homes that tourists fall in love with, and dream of after their visit. Each with their own individual style, charm and unique ginger-breading a visit will show you different styles and homes that have been restored perfectly, and others that have gone through dramatic changes over the decades. 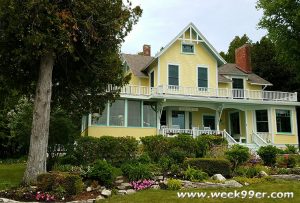 The homes that sit on Mackinac Island’s East Bluff were built on parcels of land that were divided from the State Park’s land as early as the late 19th century. While the land still technically belongs to the park, the houses had to be built in certain styles to keep with the appearance of the island. Current owners have to maintain the properties to these standards, and request certain update approvals from the council on the island. While there are two empty parcels that never were built on over the years, the option to purchase them stopped years ago, and the land will remain undeveloped. 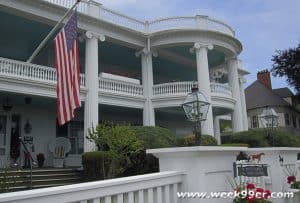 While the homes on the East Bluff have changed hands over the last 100 plus years, the original owners were the elite at the time. From rail road barons, developers and business tycoons. They chose Mackinac Island for the same reason we do today, a place for respite and relaxation. Building the homes in the styles of the time including Victorian Cottage and Shaker style, they created a private location for vacation getaways. Some of the homes are still owned by the families that built them, and retreat to the overlook location each summer.

Like any island, there is only a small amount of land to work with, and options to build on. Mackinac Island is obviously limited on any new development. But a walk down the street in the East Bluff neighborhood gives you a look at the history of the island and how well it is still preserved, the charm is exudes and brings us back each summer.