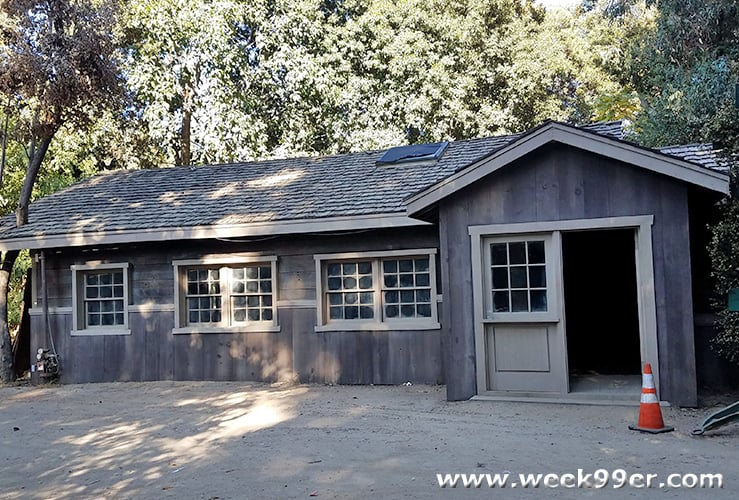 True Blood was one of those smash hits right from the first episode. The HBO series surrounding Sookie Stackhouse, a young waitress who falls in love with a vampire named Bill, and the changing world around them. Set in the small town of Bon Temps,a fictional town located in the Renard Parish in northern Louisiana.

While the show has many iconic buildings and places throughout the whole series – one of the most iconic is Merlotte’s Bar and Grill. Not only is there where Sookie works, but it’s where a lot of the interaction happens between characters, some battle scenes and even some parties later on – let’s not forget the birth of several fae right there on the pool table as well!

But the actual location of Merlotte’s? Surrounded by the wooded area of the lot at Warner Brothers. Today, the neon sign is no longer on the front of the building, but the shape of the bar is undeniable. It is flanked located by other buildings that have been used in filming and even other spots that help build the story.

From the outside, Merlotte’s is what you remember from the show. The front of the Southern style bar and grill, and the back the work area where we often saw Lafayette and other characters taking the trash out. But inside? It’s not what you would expect. Inside the building it is set up more like a hunting cabin. The offices look like something similar to what we’re used to seeing from the series, but the front of house seems like something out of a teen camp movie. The reason for this? The bulk of the interior shots were actually done on a sound stage where they could control the environment easier. Does it mean walking through Merlotte’s was less exciting for this True Blood Fan? Not at all – it just shows us the main difference from film to reality – and makes us wonder what else this space was used for.

What Else Can You Find from True Blood on the Lot?

While many of the other shooting locations, including the sound stages and interior locations are in different locations around Warner Brothers and even in different cities – you can actually visit a few other iconic spots right there on the Warner Brothers Lot. This includes the swamp that is used throughout the several seasons of the show and the tree where Sookie first meets Bill.

While sunny Los Angeles is far from Louisiana, the “Jungle” area of the lot actually is home to several different plants you would not expect and with the right lighting it can look like just about anywhere you want it to be. The Swamp is actually a tank pond that is filled when needed and shot from different angles can appear much larger than it actually is, or in a completely different location. In fact, if you just go to the other side of the swamp, you’ll see another building that was used in the film Million Dollar Baby as the lake side restaurant. This area of the lot is used often in movies and actually was the roads where the T-Rex chases the jeeps in Jurassic Park. Just a bit more of the movie magic happening right there in front of you!

This article was originally published in January 2020 from a previous visit in 2019. The Warner Brothers lot is currently closed for tours. Be sure to check out their website for updates on when they will be open to the public again.