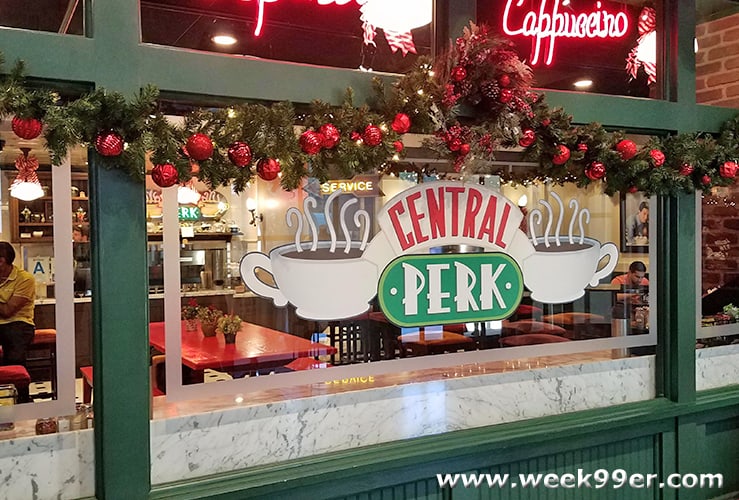 Admit it, you’ve watched Friends over and over again. The show was ground breaking and one that we all waited for every week when it came on. The comedy revolves around six young singles as they navigate life in New York City, and if we ignore the fact that none of them are actually making enough to live in the apartments they are (even if Monica’s in rent control), they have the life that as young adults we wanted and could relate to.

The show went off the air in 2004 after ten years, but it’s popularity has never really gone done. It is now one of our favorite shows to binge watch on Netflix, even though it has just been replaced by Seinfeld.

So what can fans do now that it’s harder to watch their favorite show? You can visit the set of Central Perk, and actually grab a coffee at Central Perk while you’re touring Warner Brothers. There are so many iconic

The iconic fountain from the opening of Friends is one place that all fans are going to want to see. It used to be housed on “The Ranch” another lot owned by Warner Brothers just up the road. But due to a changing in ownership coming in the future, the fountain has been put on the main lot property where a set building used to be. Now the fountain is easily accessible while walking around the lot for photos on the couch with friends, and the tram tour will make a stop so you can take your own iconic photo with the fountain.

But the big spot – and where you will want to go is the set from Central Perk. There are actually two great spots to get these photos, and one actually offers a place where you can get some coffee with your own Friends. The set from the show with the iconic couch, the counter and even other elements from the show. This is one of two paid photo opps that you can done while you’re touring the Warner Brothers lot, but absolutely worth the stop if this is your favorite show. There are other displays around it with actual costumes and other props from the show, but you’ll find more scattered throughout the whole building.

What if you want a shot of the front of the building and want to actually grab coffee at Central Perk? You can’t get to it on the couch set. Instead, the front of Central Perk is actually been moved to the entrance of this fan experience building and behind it – an actual coffee shop named Central Perk. Yes, you can grab a coffee and have some while you’re there (just don’t expect early 2000’s coffee prices). Our only disappointment in this area is the fact that the interior of the new Central Perk isn’t set up like the set. Maybe the couches would have been too hard maintain? Or they just wanted to keep it separate from the set layout so that experience stays pure for fans? But stopping by Central Perk means you get bragging rights that you had coffee where your favorite Friends characters did!

So grab a friend, head down to Central Perk and get a cup of coffee. While the popularity of Friends isn’t going to disappear soon, there’s no promise the set will always be there at Warner Brothers for you to enjoy. Take advantage of the photo package and see if they’re willing to take some a photo with you phone while you’re there.

On your way out, be sure to stop in the gift shop (don’t worry the building will lead you there anyhow) to find some great Friends inspired Swag but also some more great costumes like The Christmas Armadillo! It’s the perfect spot for another great photo and to grab a gift or two for the Friends fans in your life!

Editors note: Our visit to Central perk was in November 2019. Operations at Warner Brothers have currently been paused – check here for updates on when you can tour the lot and sets. Until then, mark it on your to do list!

Warner Brothers is offering Virtual tours you can attend here: