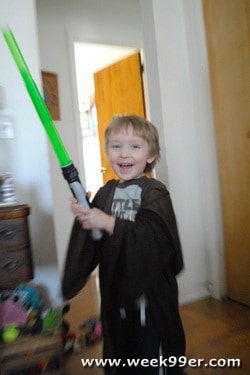 To say that Goonie is being raised in a family of Dorks, might be an understatement. I think he actually got his light saber when he was about two. So of course when Wholesale Halloween ask if anyone wanted to review Star Wars costumes, we quickly volunteered. There are several outfits we could selected for him but it was time for him to become a Jedi! Goonie was sent a Hooded Jedi Robe to review, which is great because there are some things we didn’t know about his Jedi powers until he put it on! 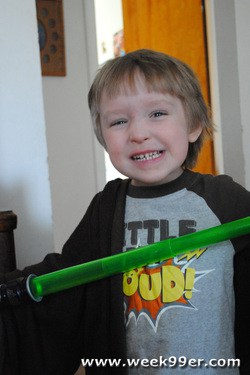 The Hooded Jedi robe is just that – the robe. It’s actually pretty affordable on it’s own, but you have to provide the other elements tohave a full Jedi wardrobe. Goonie’s wasn’t clean so he just slid the robe on over his jeans and t-shirt and was ready to go. This doesn’t inhibit the Jedi powers at all you see, instead it just adds a little bit of color to the outfit! His robe was a little big on him (totally my fault for ordering a size up), but that just means he can grow into it and have time for more powers to develop as he does.

We all know that Jedi powers include mind tricks – but did you know just by wearing the Jedi Hooded Robe Goonie got stronger!? Just look at that strong face! It’s not just with the power of the light saber, or his mind power – but he was quickly showing us his super hero powers as well! 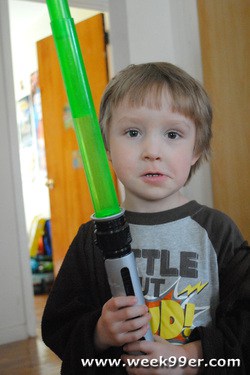 Don’t think that just because Goonie is a Jedi that he’s super serious. The hooded robe has nothing to do with being serious. Sure in the movies – Jedi are serious all the time, but that’s when the film is rolling. They don’t always have to be! Instead, get ready for goofy faces, Light Sabers being flung around and maybe even a little dancing. Since the hooded robe is open, you can get some great flow on the fabric while you dance or fight! It doesn’t inhibit movement at all, and actually is pretty light so your little Jedi can go about his duties with it on all day if he wants to. Be ready for some fun Jedi activities they don’t always show in the movie – it may involve cars or trains being played with as well! 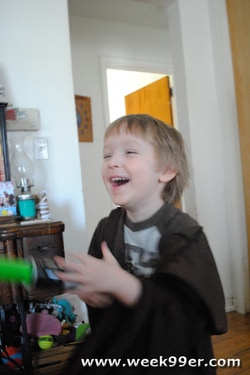 One thing we quickly learned about Jedi Powers as soon as Goonie put on his hooded Jedi robe – they can tell some pretty good (and bad) jokes! Remember they don’t have to be serious Jedi – they just need to know how to control their serious powers.

If you’re raising a little one in a house of goofballs and love Sci-Fi, chances are they are going to grow up loving it too. There is nothing better than that! There is a huge surge of pride in your inner dorkiness and nerdiness right now. Raising kids with pride in themselves is one of the most important things you can do. So let them embrace the “dork” side like we do and get them the outfit to release their inner Jedi! 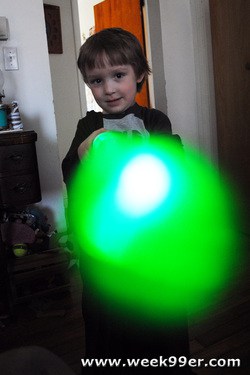 They do also have adult sized Jedi costumes, as well as other Star Wars themed outfits. Your whole family can get one for your next Star Wars movie night, Halloween, Comic Con or convention you have coming up. It might even be for a fun trip out to the mall or store, there isn’t a requirement that you can’t be a Jedi wherever you want!

We all love the Jedi Hooded Robe that Goonie was sent. Not only did he look adorable in it, but it is made sturdy enough that it will last through many Jedi years to come. And as you can see – it also released some pretty awesome Jedi powers (that may or may not happen with your little one ;)).