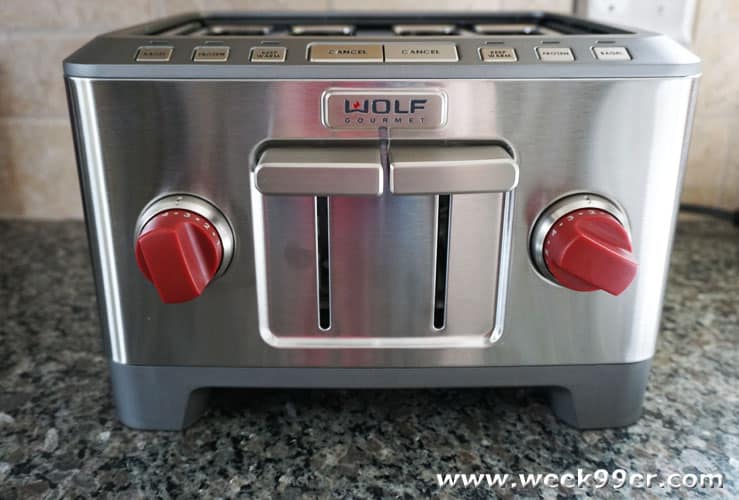 Years ago, when I first moved in with my boyfriend we had a toaster. I was newly diagnosed with celiacs disease, wasn’t ready to give up bread completely but I didn’t consider the possible cross contamination that a regular toaster may have on my meals. But the toaster we had was old, the type we’ve all seen – big and metal, with a fabric wrapped cord. Yes, it was actually that old! It wasn’t long until the years of crumbs trapped inside showed me why that old toaster was a bad idea and it was quickly donated. Since then we have been a toaster free house, much to the surprise of many people. It’s one of the few small appliances we didn’t have,  and one that I had only considered getting when I saw a good deal – but it had to have a specific features in order for me to get it. 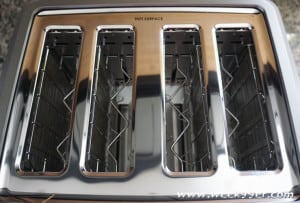 Last week, while I was at IHHS I attended a small party for Wolf Gourmet to check out their new appliances, knives and kitchenware. As the name suggests, the products are high end, have features that a regular home cook may want but not need yet. The features do more than what the regular appliances do, but offer features you may not have known you wanted or needed. At the event Wolf Gourmet featured a few of their new products including a high speed blender, toaster oven (coming out this fall) and even their four slice toaster. At the end of the event they held a giveaway for the blender and toaster – and I was lucky enough to win the toaster! My friend laughed a bit that someone gluten free was walking out with a toaster, but for years friends have sworn that’s the best way to enjoy gluten free bread since it falls apart less. 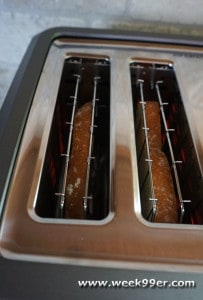 Our home is 95% gluten free, so a traditional toaster with only two slots wouldn’t work for us. I need a toaster with a “gluten free side” where I know there isn’t a possibility of crumb cross contamination. The Wolf Gourmet 4 slice toaster gave us that option. There are two dedicated slots for my boyfriend’s regular bread, as well as two for mine. Each side is run independently and offers 7 different browning settings, a bagel setting, a button to use on frozen bread or treats and even a “keep warm” setting. The slots are extra wide and can accommodate artisan bread or bagels, but that’s not the only thing they do. Inside each and every slot is a bread guide. When you place your bread inside the toaster there are two guides that gently grab your bread and center it in the toaster. This way your bread will get the most even toasting and reduces the chance you will end up with burnt toast. The guides come in at an angle, and make sure that they fit the bread inside easily and quickly. 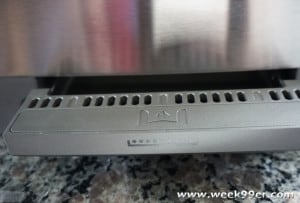 Probably one of the most important features for our household on the Wolf toaster is the separate crumb trays. Our old toaster didn’t have a way to remove crumbs, except to shake them through the top of the toaster. Each side of the Wolf toaster has it’s own tray, so even our crumbs will be separated and it further reduces our chance of cross contamination. It’s a simple feature, but one that is extremely appreciated in our household.

The Wolf Gourmet Four Slice Toaster is a considerable investment in price as well as counter space. The toaster is about 1 foot wide and 1 foot deep, so it will take up a large portion of your counter space compared other models. But the amount of features and options the toaster has makes it more than just a quick toast maker that we all grew up with. Instead the additional options and features make it a great tool for any home kitchen or for the home cook who wants the additional options.

While a toaster hasn’t been in our home for years, the Wolf Gourmet toaster quickly found a home in our kitchen and our lives. After I returned from Chicago, it was quickly unboxed and we had something we hadn’t in years – BLTs! It’s now becoming a regular thing in our kitchen to have toasted bread on our sandwiches (which does make a different for gluten free breads), and even a quick snack with homemade jam in the morning or afternoon.