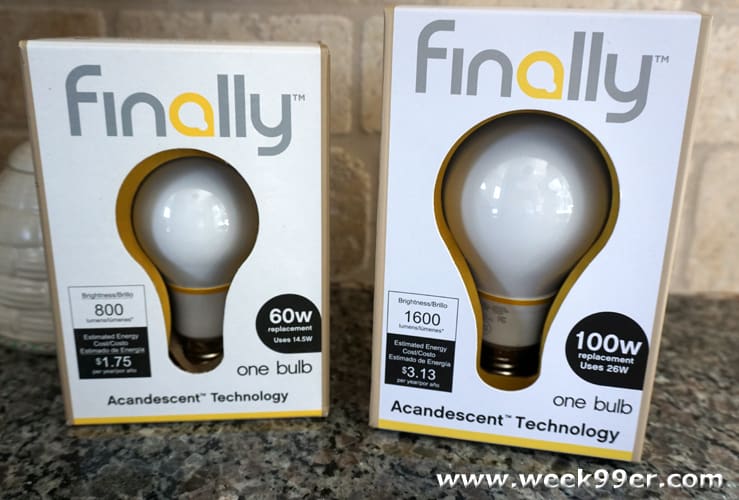 Over the years they’ve have come out with new light bulbs like CFL (Compact Florescent) bulbs that can produce higher light outputs compared to standard incandescent bulbs like we grew up with. The problem is that not all of the newer options that have come out actually save you money. Instead, people have found the CFL bulbs (besides looking like ice cream swirls) take up the same amount of power as traditional bulbs. They may provide a more bright white light – but still consume the same amount of power.

The long and short of it – Acandescent bulbs use 75% less energy and can last 15 times longer than your bulbs you replace every year. They provide a nice warm light similar to what you’re use to without sapping your energy. The 60W bulbs only take 14.5W of energy to run, and produces 800 lumens of light. The estimated cost to run the bulb per year is only $1.75! That right there is a huge savings on your energy bill.

When I first put the Finally Light bulb in our new lamp it started out dimmer than I thought. I had hoped to use the 100W bulb that we were sent, but it was too tall to fit inside the lamp we have. With initially a dimmer light, I was a bit disappointed at how much light was put out by the bulb. But after a few minute the bulb began to warm up and the light was as bright as I had hoped it would be – and actually at times brighter than we had anticipated. Yes! From a 60W bulb!

Finally Light bulbs boast instant on, instant re-start, the ability to use in enclosed fixtures, and a 10 year warranty. The 60W Finally Light Bulbs start at $9.99 but with (at least) a 10 year life, it prices them under the cheap bulbs you’ll keep replacing that keep running up your energy bills.

Find out more about Finally Light Bulbs and make the switch by getting your own on their website!