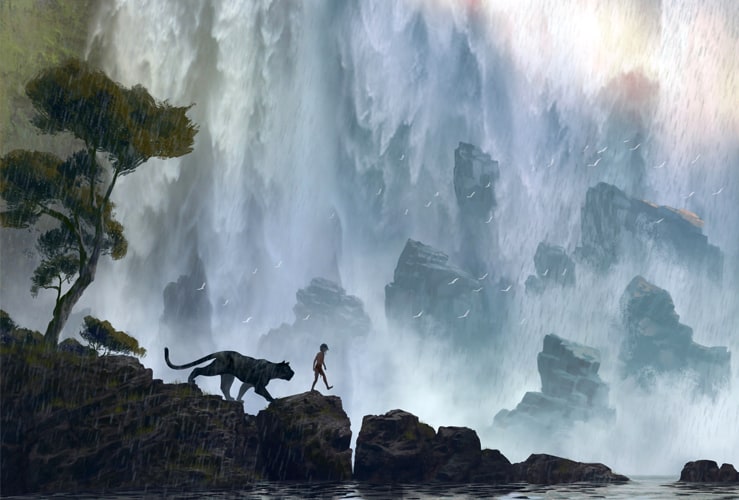 By now we’re all familiar with the story of The Jungle Book. The man cub Mowgli who was raised by wolves in the jungle in India who is on a (reluctant) journey to be rejoined with the Man Village. Whether it’s the 1964 animated version of the story, the several other recreations or the original Rudyard Kipling story, the story is one we’ve all grown up with and love. So when I first heard that it was going to be recreated as a live action film, I was a bit hesitant – it had been done before and did not always have the best results. This time, however, it had the Disney power house behind it as well as a fantastic line up of actors and amazing graphics team. The result is a jaw dropping world that will transport you to the depth of the jungle.

I was invited to check out the movie before it opens, and of course the screening was in 3D. Normally, I’d say that movies were good in 3D, but it wasn’t essential to see them in that format. But The Jungle Book is the first movie I’d say that for me that was absolutely worth the 3D experience. From the site scenes, vivid details and flying objects – it full puts you into the movie and the world that is created in The Jungle Book.

The Jungle Book brings back the characters we’re all familiar with including Mowgli, Kaa, Bagheera, Shere Khan and of course Baloo. All of the main animal characters are voiced by acting greats like Ben Kingsley, Idris Elba, Christopher Walken, Scarlett Johansson and Bill Murray. There are smaller parts voiced by other well known names, and even one voiced by Director John Favareau. And despite popular belief, the whole movie is not CGI. Yes, the movie was filmed completely in a studio in downtown Los Angeles, but all human characters in the movie were actually done by actors and the movie seamlessly blended together.

Since the movie is a live action version, expect to see more realistic jungle interactions versus what we’re use to in the animated classic. That being said, expect actual animal fights, roars and scenes that can get a little intense. There were some that I would think may be too scary for smaller children – but the toddlers a couple seats down from me at the screening didn’t flinch. It’s the natural world being portrayed with a bit of personification with the main characters.

One thing the movie did well was keep the animals to the species you’d find true to what you’d find the Indian jungle. Baloo is no longer the “big brown bear” from the book, or just a grey bear we’re use from the cartoon version. He’s actually a sloth bear that is regionally correct. King Louie has been changed to a Gigantopithecus, and you can expect to find a lot of endangered species from the region including pygmy hogs to pangolins.

The actors lend their personalities to the characters they’re portraying in The Jungle Book, but I have to say there were two that personally stood out for me. King Louie is voiced by Christopher Walken, and overall his performance seemed to me like it came directly out of a Italian Mob movie. It fit for the character, but made the audience chuckle a bit. The second of course was the short appearance of Kaa, voiced by Scarlett Johansson. Kaa didn’t have a huge role in the animated movie as well, and while Kaa is physically a big character, the part is small and integral for the introduction of Baloo. Kaa sultry sings the song “look at me” to Mowgli as she has him in her clutches. To me, Johansson’s version of the song was reminiscent of a James Bond opening song. That being said, it was a nice update to the cheesy version of the one we’re use to from the cartoon where Kaa is a giggling daffy snake.

The Jungle Book is amazing in live action, and the CGI makes it a magical experience for the viewer. This is a movie I would definitely say to go check out while it’s in theaters and get ready to add it to your collection at home. There isn’t an after credit scene for you to hang around for, however the credits themselves offer a lot of different animated extras and even more 3D effects. It’s worth sitting through them and enjoying the songs from the movie again – that by now we all know by heart anyhow.

THE JUNGLE BOOK opens in theaters everywhere in 3D, RealD 3D, and IMAX 3D on April 15th! Visit the official THE JUNGLE BOOK website. Still not convinced you should see it? Check out this clip below: