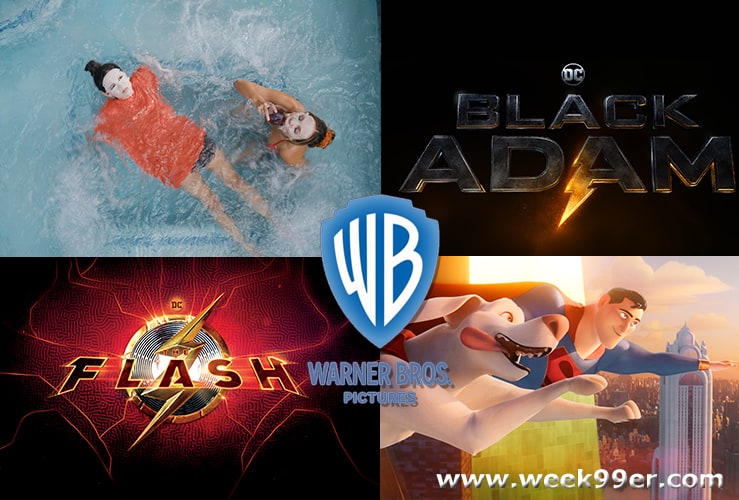 After a very busy movie year, it’s time to look forward to what’s coming out again. We’re still gathering more movie release information, and some dates may be moved due to the ongoing pandemic and other factors. But with that said, Warner Bros Pictures has a pretty impressive slate coming for us in 2022. From super hero movies, animated films, dramas, thrillers and even an intriguing film about Elvis!

Unlike 2021, Warner Bros major movie releases are currently set to only premiere in theaters. But that doesn’t mean HBO Max subscribers wont have plenty to watch – there is a whole list of movies releasing there as well.

To stay up to date with these movie releases, as well as others be sure to check out our Movie Release Schedule that is updated weekly for all of the major movies. And remember, if you miss their showing slot in the cinema, you can always rent DVDs from Cinema Paradiso to watch at home.

Two years of stalking the streets as the Batman (Pattinson), striking fear into the hearts of criminals, has led Bruce Wayne deep into the shadows of Gotham City. With only a few trusted allies—Alfred Pennyworth (Serkis), Lt.
James Gordon (Wright)—amongst the city’s corrupt network of officials and high-profile figures, the lone vigilante has
established himself as the sole embodiment of vengeance amongst his fellow citizens. When a killer targets Gotham’s elite with a series of sadistic machinations, a trail of cryptic clues sends the World’s Greatest Detective on an investigation into the underworld, where he encounters such characters as Selina Kyle/aka Catwoman (Kravitz), Oswald Cobblepot/aka the Penguin (Farrell), Carmine Falcone (Turturro), and Edward Nashton/aka the Riddler (Dano). As the evidence begins to lead closer to home and the scale of the perpetrator’s plans becomes clear, Batman must forge new relationships, unmask the culprit, and bring justice to the abuse of power and corruption that has long plagued Gotham City.

FANTASTIC BEASTS: THE SECRETS OF DUMBLEDORE

Professor Albus Dumbledore (Law) knows the powerful Dark wizard Gellert Grindelwald (Mikkelson) is moving to seize control of the wizarding world. Unable to stop him alone, he entrusts Magizoologist Newt Scamander (Redmayne) to lead an intrepid team of wizards, witches and one brave Muggle baker on a dangerous mission, where they encounter old and new beasts and clash with Grindelwald’s growing legion of followers. But with the stakes so high, how long can Dumbledore remain on the sidelines?

In theaters in North America May 20 / Intl beginning 18 May

Krypto the Super-Dog (Johnson) and Superman (Krasinski) are inseparable best friends, sharing the same superpowers and fighting crime in Metropolis side by side. When Superman and the rest of the Justice League are kidnapped, Krypto must convince a rag-tag shelter pack—Ace the hound (Hart), PB the potbellied pig (Bayer), Merton the turtle (Lyonne) and Chip the squirrel (Luna)—to master their own newfound powers and help him rescue the Super
Heroes.

Baz Luhrmann’s “Elvis” explores the life and music of Elvis Presley (Butler), seen through the prism of his complicated relationship with his enigmatic manager, Colonel Tom Parker (Hanks). The story delves into the complex dynamic between Presley and Parker spanning over 20 years, from Presley’s rise to fame to his unprecedented stardom,
against the backdrop of the evolving cultural landscape and loss of innocence in America. Central to that journey is one of the most significant and influential people in Elvis’s life, Priscilla Presley (DeJonge).

Nearly 5,000 years after he was bestowed with the almighty powers of the Egyptian gods—and imprisoned just as quickly—Black Adam (Johnson) is freed from his earthly tomb, ready to unleash his unique form of justice on the modern world.

Haunted by an incident from his childhood, author Ben Mears returns to his hometown of Jerusalem’s Lot in search of inspiration for his next book, only to discover the town is being preyed upon by a bloodthirsty vampire and his loyal servant.

A 1950s housewife (Pugh) living with her husband (Styles) in a utopian experimental community begins to worry that his glamorous company may be hiding disturbing secrets.

Ezra Miller stars as Barry Allen, AKA The Flash, who pushes the limits of his superpowers in the DC Super Hero’s first-ever standalone feature film.

AQUAMAN AND THE LOST KINGDOM

When an ancient power is unleashed, Aquaman must forge an uneasy alliance with an unlikely ally to protect Atlantis, and the world, from irreversible devastation.

Bolstered by new friendships forged under sudden and tragic circumstances, high schooler Vada (Jenna Ortega) begins to reinvent herself, while re-evaluating her relationships with her family, friends and her view of the world. Moving away from her comfortable family routine, she starts taking chances with a series of quicksilver decisions that test her own boundaries and push her in new directions. As she spends more time with Mia (Maddie Ziegler), they grow closer, and Vada slowly redefines herself through their shared experiences, leading her further away from that day and
closer to living her life in the now. “The Fallout” is a compelling exploration of the inexplicable resiliency of life and the hope that emerges out of loss.

A romantic comedy with a sci-fi twist, the film is set in a future where Mars is terraformed and colonized by the best humanity has to offer. Two very different college students wind up joining forces and sneak onboard a space shuttle to the red planet in order to be united with their significant others.

FATHER OF THE BRIDE

The story of a father coming to grips with his daughter’s upcoming wedding through the prism of multiple relationships within a big, sprawling Cuban-American family.

Moving the action out of the woods and into the city, “Evil Dead Rise” tells a twisted tale of two estranged sisters, played by Sutherland and Sullivan, whose reunion is cut short by the rise of flesh-possessing demons, thrusting them into a primal battle for survival as they face the most nightmarish version of family imaginable.

Channing Tatum and Steven Soderbergh reunite for the third installment of the blockbuster film franchise.

To celebrate Scooby Doo’s first Christmas, 10-year-old Shaggy and the gang take
him to a holiday-themed resort owned by Fred’s favorite Uncle Ned. When the park is beset by a ghostly haunting, the kids must solve a 40-year-old mystery to save the resort and show Scooby the true meaning of Christmas.