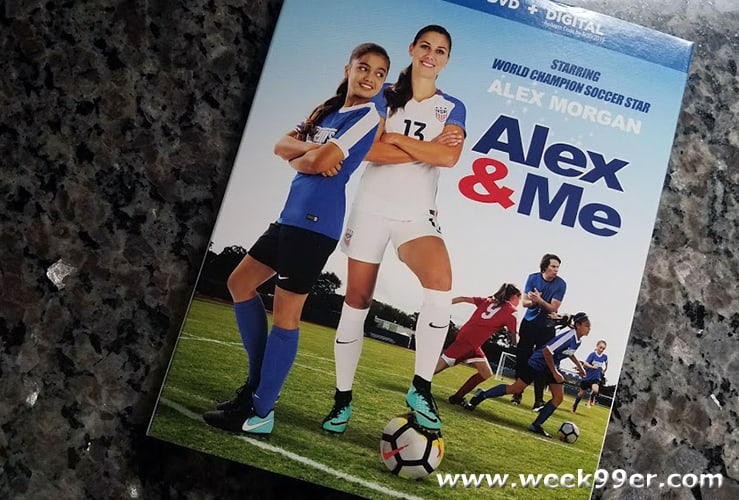 Warner Bros. Home Entertainment provided me with a free copy of the Blu-ray I reviewed in this Blog Post. The opinions I share are my own.

The gold medal winning Alex Morgan has her debut role sports comedy/drama.  A young girl wants to be a star soccer player like her idol, Alex.  She has a couple of setbacks.  Reagan, the Me in the title, is visited by a poster come to life of Alex that helps her with her training.  This is a cute movie about a girl giving her all to realize her dream.
There are few movies that show positive role models to young girls and that failure just means to try harder.  Even though this movie was straight to video, little girls and little soccer players will have a good time watching this G rated film. We love the fact that the movie has a positive message for sports fan of all ages.
The blu-ray includes several items like a featurette, a getting to know Alex Morgan, background on the movie and some outtakes.
Get your copy of Alex & Me online or enter to win a copy below!

Teenager Reagan Willis (Agudong) has one dream – to play soccer like her hero, Alex Morgan. Her bedroom is a shrine to all things Alex, including a life-size poster of the Olympic gold medalist. Yet in the Willis house, Reagan lives in the shadow of her prep football superstar brother, Logan. When Reagan fails to make the cut of the premiere local soccer club team and is humiliated by her rival Claire, she’s certain her ship has sailed. But after accidentally hitting her head, Reagan’s poster of Alex Morgan suddenly comes to life and everything changes! 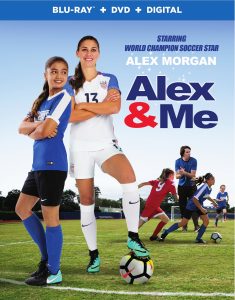 An Olympic Gold Medalist and FIFA Women’s World Cup champion with a penchant for goal scoring, Alex Morgan is one of the top soccer players on the planet, currently playing forward for the United States Women’s National Team and the Orlando Pride of the National Women’s Soccer League. Away from the field, Morgan is also an accomplished author of “The Kicks” series, a collection of chapter books filled with wonderful messages of empowerment for young girls. The first The Kicks book, “Saving the Team,” debuted at No. 7 on the New York Times Best Seller list.

“Alex & Me is a heartwarming film that will inspire young children to follow their dreams,” said Mary Ellen Thomas, WBHE, Vice President, Family & Animation Marketing. “We think Alex Morgan fans, soccer enthusiasts, and young girls alike will fall in love with this story about hard work friendship and family.

How Can You Win?
Enter to win with the form below. Let us know about who your favorite Soccer Star is or Who your role model was/is? Or Tell us your favorite summer plan! If you do not do this entry – you will not win! So make sure you leave a comment and then enter using the form below!

Each household is only eligible to win Alex & Me Blu-ray via blog reviews and giveaways. Only one entrant per mailing address per giveaway. If you have won the same prize on another blog, you will not be eligible to win it again. Winner is subject to eligibility verification.