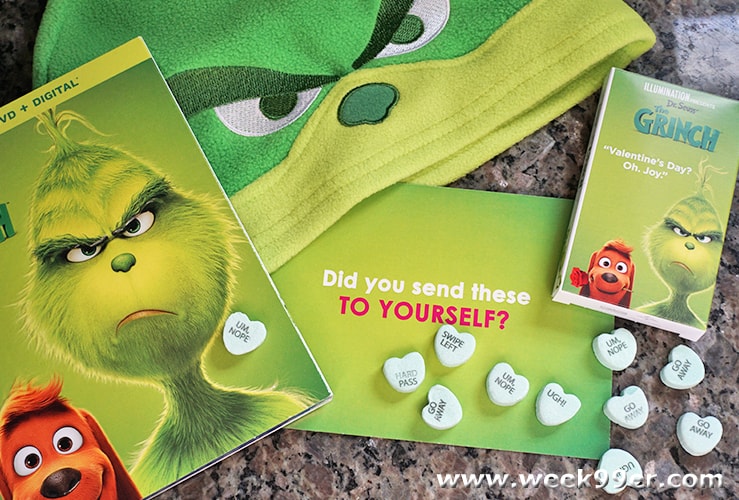 Valentine’s Day is when we’re supposed to spend the day with the people we love. But what if you are the Grinch and don’t plan on celebrating? We have the perfect solution for you! Why not stay in and watch The Grinch that will be out on Blu-Ray and DVD later this week?

We were sent a great package from Universal to celebrate the release of The Grinch and it includes a hat, snarky conversation hearts (the perfect solution since the regular ones are hard to find this year!) and a copy of the movie to share with the ones you love. I mean – how could it get better?

The Grinch brings back the story of the grumpy green guy who tries to ruin Christmas for the residents of Whoville, but ends up finding out that he has a lot to offer them and the world. While watching the movie your heart may grow three times as well. Hailed as even better than the original, The Grinch may be a Christmas movie, but it is going to be one that you and your family fall absolutely in love with.

And since we’re talking about love – make sure you enter to win a great Grinch prize package (more details below!)

About Dr Suess’ The Grinch at Home Release:

We’re giving away a great Prize Package for our readers! One reader will win a Grinch prize package including:

What Can You Win?

Enter to win with the form below. Who will you give this prize package to? Or who will be your Valentine this year? If you do not do this entry – you will not win! So make sure you leave a comment and then enter using the form below!