So you loved DreamWorks Home – let’s be real here, who didn’t? It’s a movie with a lot of fun adventures and it’s one that we all can relate to – an outsider who is not only looking for friends but family. The Boov come to planet Earth to help out the humans and save us, but to make their world their own. Until they actually find out that humans never wanted to be saved. But what happens after the movie? We saw Chicago and a lot of the world get destroyed by Boov, but not really what happens in the aftermath.

The new show coming to Netflix on the 29th – DreamWorks Home: Adventures with Tip & Oh picks up where the story left off. I was invited to DreamWorks Animation Studios to watch the first few episodes of the new show earlier this summer. And I’ll put it simply – it’s hilarious! 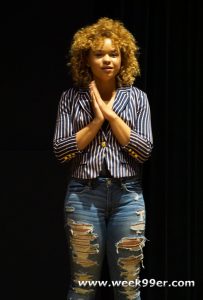 The new show is the older traditional 2D animation style with new layering effects with texture to give it depth and dimension. It doesn’t have Jim Parsons or Rihanna. Instead the voices are done by Rachel Crow (Tip) and Mark Whitten (Oh). While fans of the movie will pick up a slight difference for the characters, ti’s not enough to distract from the show and make it enjoyable. Instead the voices seem to fit the characters, and some of the actors actually resemble the character in real life. Rachel Crow not only voices Tip, but sings the theme song that she also helped write. The show is a clever take on the “after” done in shorter 12-13 minute cartoons. Not only does each episode include the characters we love, but new Boov are introduced continuously as well as new aliens that may or may not help out the new world.

The creative stylized design of the new show has small things you may or may not notice the first time watching them. But the most notable thing you will see in the show is the focus on friendship and family. Like most cartoons (or at last good ones), Adventures with Tip & Oh seems to have a small lesson in each episode. It may be something small but they’re are positive messages. There aren’t any episodes with mean intentions, and things will be nicely resolved at the end of the story. The message can range from family accepts you no matter what to everyone deserves fairness in their friendships. Each story had heart, jokes and there is great original music in the episodes that you will love.

So – you loved the movie Home, should you watch the new show? Absolutely! Even if you don’t have kids. You will not only find DreamWorks Home Adventures with Tip & Oh funny, but well thought out. Yes, the target audience is children – but I sat in a theater filled with adults laughing continually over the episodes. See how the world has changed after the Boov landed and how new friendships are formed, and what technology can be used by both cultures.

DreamWorks Home Adventuers with Tip & Oh Season 1 is on Netflix on July 29th, check out the trailer below and tune in next week!

DreamWorks HOME Adventures with Tip & Oh is jam-packed with original pop music, fun and loads of laughs. Picking up where the 2015 animated film left off, our heroine and her intergalactic misfit companion embark on new adventures as Oh and his otherworldly friends adjust to life on earth, making strange discoveries and meeting outrageous new friends along the way. Watch what happens after this unlikely pair from two different worlds take us on hilarious adventures as Oh is eager to learn everything about the world with his best friend Tip.
When Oh moves in with Tip, mom Lucy and cat Pig, he discovers that he’s truly found his “home” – and everyone in your home is sure to love this all-new coming-of-age buddy comedy. The multi-talented voice cast is led by Rachel Crow (The X Factor) as Tip and Mark Whitten (Rolling High) as the voice of Oh, along with Ana Ortiz (Devious Maids) as Lucy aka My Mom, Ron Funches (Get Hard, Undateable) as social media maven Sharzod and Matt Jones (Breaking Bad, Mom) reprises his film role as best friend Kyle. The series includes tons of memorable and toe-tapping original music that highlights Rachel Crow’s extraordinary vocal talents, including the series theme song sampled in the trailer.