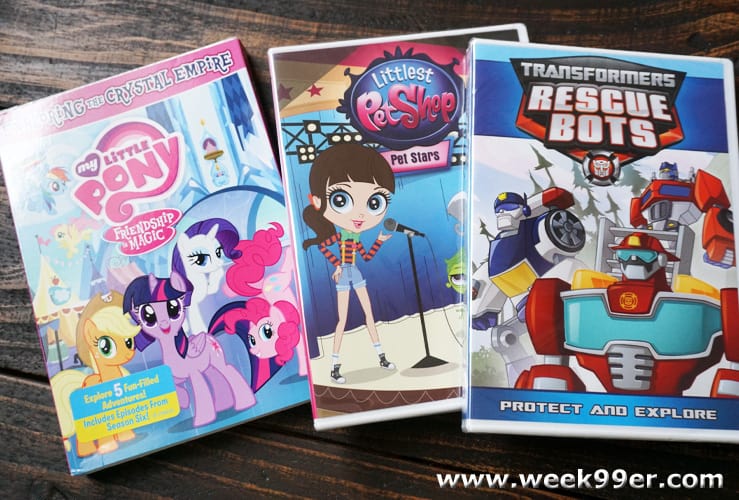 Do you have a fan of My Little Ponies, Rescue Bots or even Littlest Pet shop in your family? They’ve no doubt watched their favorite shows over and over again. But what do you do when their favorite episodes may not be available on cable anymore or you can’t find them? Thankfully, Habro has partnered with Shout! Kids to make sure all of your favorite episodes are available at home on DVD, and we’re giving away the latest releases to one lucky winner.

What you can win:

My Little Pony Friendship Is Magic: Exploring the Crystal Empire

My Little Pony – Friendship Is Magic: Exploring the Crystal Empire is coming to DVD on February 7, 2017 in the U.S. and Canada from Shout! Kids in collaboration with Hasbro Studios.

Join Twilight Sparkle, everypony’s favorite studious princess, and her very best friends – Rainbow Dash, Applejack, Rarity, Fluttershy, Pinkie Pie and Spike – as they explore the wondrous arctic kingdom, the Crystal Empire! Old enemies return and new friends are made in this collection of episodes that will have you exploring the Crystal Empire with magical adventure!

A pet star is born! On February 14, 2017, buddy up with Blythe and her superstar pet pals with Littlest Pet Shop: Pet Stars on DVD from Shout! Kids, in collaboration with Hasbro Studios.

Sinister king cobras! Comedy festivals! Pet hotels! And a monkey on Mars?! It’s all here, as Blythe and her best friends – Russell the Hedgehog, Pepper the Skunk, Zoe the Spaniel, Minka the Monkey, Sunil the Mongoose, Penny the Panda and Vinnie the Gecko – share one outrageous adventure after another in The Littlest Pet Shop: Pet Stars!

Get ready for big adventures and rescues in the great outdoors! Transformers Rescue Bots: Heroes of Tech will be released on DVD on February 21, 2017 from Shout! Kids, in collaboration with Hasbro Studios. Featuring five exciting episodes that the whole family can enjoy, this DVD is priced to own with a suggested retail price of $14.93.

When a mysterious iceberg is spotted off the coast of Griffin Rock, it brings both danger and the interest of an old nemesis. On a nature hike, the Rescue Bots team will have to battle escaped snakes. And when the Burns family is stranded at sea by a swarm of jellyfish, the Bots must control miniature souvenir replicas of themselves. Enjoy these adventures and more in Transformers Rescue Bots: Protect and Explore!

Enter to win with the form below. Tell us your favorite character from the series above! Or – Who gets this collection if you win?  If you do not do this entry – you will not win! So make sure you leave a comment and then enter using the form below!

6 thoughts on “Win the Top Hasbro Shows on DVD!”