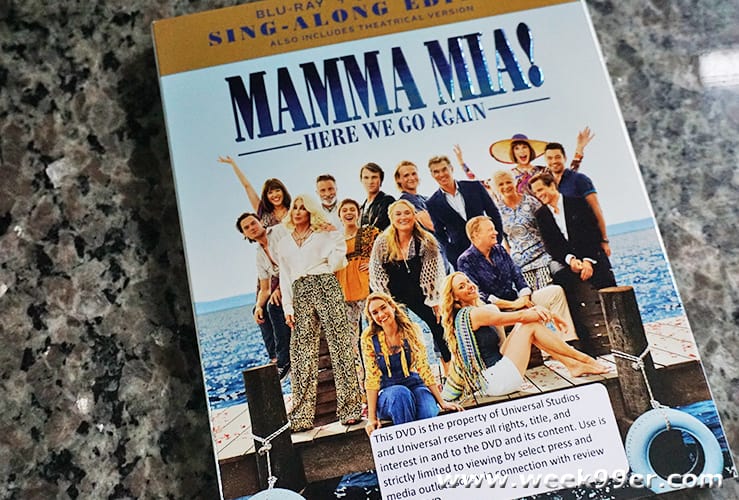 The original movie is in our constant rotation of feel good movies, so when we heard there was going to be a sequel we were excited. Mamma Mia! Here We Go Again is the feel good sequel we were waiting for – filled with heart felt moments and and of course music from ABBA. Toting an all star cast, Mamma Mia! Here We Go Again got fans dancing in their seats again and tapping their feet along with their favorites.

The movie brings back Donna, her daughter Sophie, her fathers and all of their friends. As Sophie moves onto the next stage of her life, Donna reflects back to her own pregnancy and the decisions she made in her life. Besides gorgeous scenery and great music, the movie is filled with moments you can relate to. With the same heart put into the original movie, you’re going to absolutely love the new chapter in the series. We hope to see the story continue, and love the casts devotion to the roles they play in the films.

We’re giving one of our readers their own copy of Mamma Mia! Here We Go Again. Read more about the movie below and how you can win a copy of it on Blu-Ray and DVD!

Ten years after Mamma Mia! The Movie grossed more than $600 million around the world, you are invited to return to the magical Greek island of Kalokairi in an all-new original musical based on the songs of ABBA.  With the film’s original cast returning and new additions including Lily James (Cinderella, Baby Driver), the musical comedy will open on July 20, 2018. 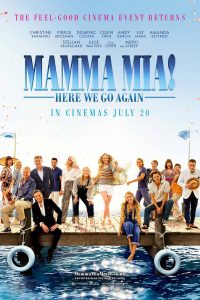 Mamma Mia! Here We Go Again is produced by Judy Craymer and Gary Goetzman, producers of the original film.  Craymer is also the creator and producer of the worldwide smash-hit stage musical.

As the film goes back and forth in time to show how relationships forged in the past resonate in the present, James will play the role of Young Donna.  Filling the roles of Young Rosie and Young Tanya are Alexa Davies (A Brilliant Young Mind) and Jessica Keenan Wynn (Broadway’s Beautiful).  Young Sam will be played by Jeremy Irvine (War Horse), while Young Bill is Josh Dylan (Allied) and Young Harry is Hugh Skinner (Kill Your Friends).

How Can You Win?
Enter to win with the form below. Tell us your favorite ABBA song and who you will take with you to see Mamma Mia Here We Go Again! If you do not do this entry – you will not win! So make sure you leave a comment and then enter using the form below!