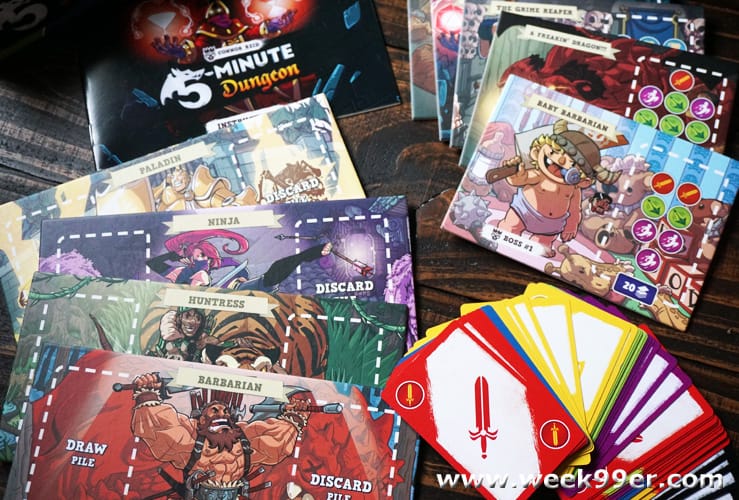 Family game night is back in action with a fun new game, fresh on the market. 5 Minute Dungeon is a fast paced card game that is here to change how you play games with your friends and family. The game is currently on Kickstarter- and was fully funded in just six hours!!! – but we got an early copy to test out with our friends. 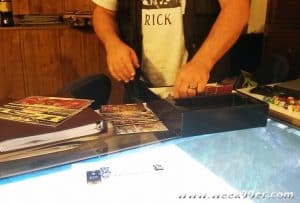 Over the last few years, we’ve seen a surge in popularity of card games that have groups of players taking back game night. Many of these games are publicly funded through crowd sourced campaigns, and 5 Minute Dungeon is no different. Meant for a group of 2-5 to play, 5 Minute Dungeon is a complete game that the group can play start to finish in 5 minutes. 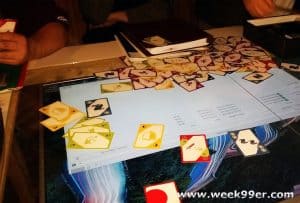 While we love having friends over for movies and game night, we actually sent the game to be tested for the monthly guys night, where a large group of guys get together for a night of gaming. Played with a timer, 5 Minute Dungeon takes players on quest to battle their way through different dungeons. Your group all plays at once and the biggest battle is against the timer of only 5 minutes per dungeon. With no set turns, you battle together to defeat the dungeon your in, in order to move onto the next. 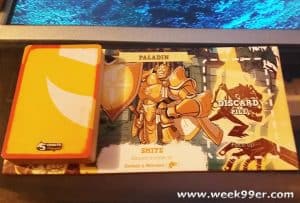 The game is easy enough to pick up, and can be customized as you go with adding or removing players. There are 10 different heroes you can play, so each time you can change your adventure each time you play. The set comes complete with all of the cards you need, the dungeons and a timer for game play.

So what did a bunch of hard core gaming guys think of 5 Minute Dungeon? It was a lot of fun to play. The only critique was the game took a bit of time for the initial set up and reset time between games took a while (and sometimes more than 5 minutes). The game seemed to be targeted towards a slightly younger gaming audience than 30-40 something guys, but was still fun for them to play and a change from the regular game night. 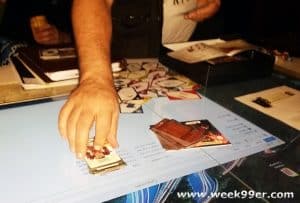 There really isn’t an age limit on 5 Minute Dungeon, which actually makes the game perfect for family game night. Kids as young as 5 (or possibly younger) will love playing this game and getting in on the battle. It’s a lot of fun and will have your kids laughing as they try to fight their way out of the dungeon with your team of heroes. One of the best parts for me, you don’t have to be a hard core gamer to enjoy 5 Minute Dungeon! It’s fun for a wide variety of players and experience levels. If you love family game night, card games or fast paced entertainment – check out the 5 Minute Dungeon Kickstarter! It only has a few days left – and contributing or ordering now means a ton of extra goodies in your game!

Adrenaline-fueled to create a jolt of excitement for casual and advanced players alike, 5-Minute Dungeon is a game in which players have a short five minutes to conquer a dungeon. Its humor-filled fantasy world is home to creatures like “A Cactus That Wants a Hug,” “The Grime Reaper” and “A Shark With Legs.” 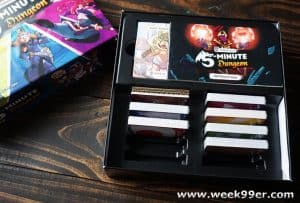 In the game, two to five players join together and choose up to five heroes to battle monsters, overcome obstacles, and defeat the dungeon boss.  There are five dungeons to defeat, each more challenging than the last, with the final dungeon requiring precise skill, speed, and strategy to defeat.  With no time to form a carefully-considered plan, and no predicting what dangers lie ahead, communication and teamwork are the name of the game, crucial to surviving the 5-Minute Dungeon.

“Designed with enthusiasts, life-long dungeon-crawlers and casual gamers in mind, 5-Minute Dungeon feeds into the hottest trend — co-operative gameplay. It’s a fun, fast-paced card game that can be played anytime,” said Connor Reid, creator of 5-Minute Dungeon.  “With the game’s humorous tone, overarching goal, detailed art and rapid action, we’re confident that 5-Minute Dungeon will be the next must-have game launched on Kickstarter.”

A 5-Minute Dungeon timer app, available for free on both iOS and Android, keeps the action on track as the team attempts to conquer the dungeon in less than five minutes.

We have partnered with Wiggles3D to give away 3 copies of 5 Minute Dungeon! Read how you can win one for your family game night below!