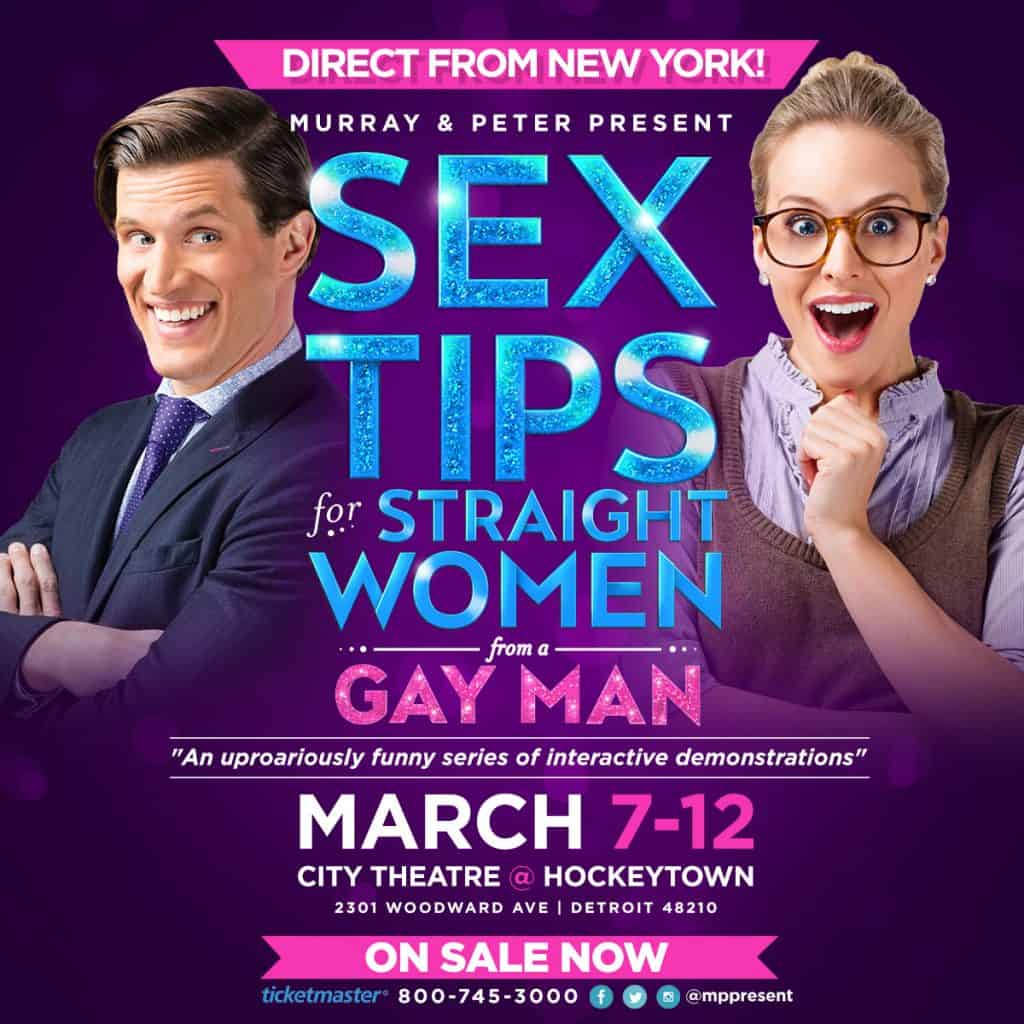 Sometimes, we need to pack away the kid friendly things and take a night out for us. Coming to Detroit’s City Theatre is a hilarious play just for adults – and we’ve partnered with Olympia Entertainment for a great ticket giveaway for Sex Tips for Straight Women from a Gay Man. You can find out more about the show and how to win below! Get ready for a fun date night or girl’s night out!

Murray & Peter proudly present the national tour, Sex Tips for Straight Woman from a Gay Man premiering in Detroit at the City Theatre from Tuesday, March 7 – Sunday, March 12. Written by Matt Murphy and based on the best-selling book of the same title, this hilarious romantic comedy takes the audience on a wild ride where no topic is taboo.

Tickets ($28, $43 and $63) are on sale now and can be purchased at OlympiaEntertainment.com, The Fox Theatre and Joe Louis Arena box offices, Hockeytown Authentics in Troy (without service charge) at all Ticketmaster locations and Ticketmaster.com. To charge tickets by phone, call (800) 745-3000. For additional information, call (313) 471-6611.

The play is set at a local university auditorium where the English Department holds its monthly meet the authors’ event. Robyn is the shy and studious moderator of the event and this month’s featured author is Dan Anderson who wrote, Sex Tips for Straight Women from a Gay Man. The third character is a hunky stage assistant of Eastern European descent, Stefan. Thwarting Robyn’s attempts to moderate a scholarly discussion of the book, Dan aims to entertain those in attendance with a highly theatrical, audience-interactive sex tip seminar.

The production is based on the book Sex Tips for Straight Women from a Gay Man written by Dan Anderson and Maggie Berman. First published in 1997, the book championed the straight girl / gay guy friendship in mainstream pop culture and instantly became a national best seller. The book was praised by the New York Daily News for “offering witty—and yes, explicit—descriptions of all manner of how-to’s;” by The New York Post as “straightforward and saucy . . . a play-by-play account of how to make the most of every moment;” and by Salon.com as “a cannily entertaining romp through the nuts and bolts of sex from the male perspective.” Now a cult classic, the book has also been published in Germany, Japan, Taiwan, Brazil, the Netherlands, Australia, England, and France.

The play has received the same adulation from the media with TheaterMania touting “SEX TIPS is one of the best date-night shows you’ll see this year. Breathlessly entertaining! Uproariously funny! Hysterically titillating!” and Michael Musto for OUT Magazine giving the show; “Two wet thumbs up!” Broadway World calls the show; “a night of fun and exhausting laughter that makes you feel good in all the wrong places” and the academics from Columbia Spectator call it; “hysterical and better than sex!”

Check out their website for more information about Sex Tips for Straight Women From a Gay Man!

Enter to win with the form below. Who will you take with you to see Sex Tips for Straight Women from a Gay Man? You have to answer this question to win! So make sure you leave a comment and then enter using the form below!

1 thought on “Win 4 Tickets to See Sex Tips for Straight Women from a Gay Man at City Theatre!”

A Dog’s Courage is Available on Blu-Ray Combo Pack – Win a Copy!

Win a Copy of Are You Afraid of the Dark? on DVD