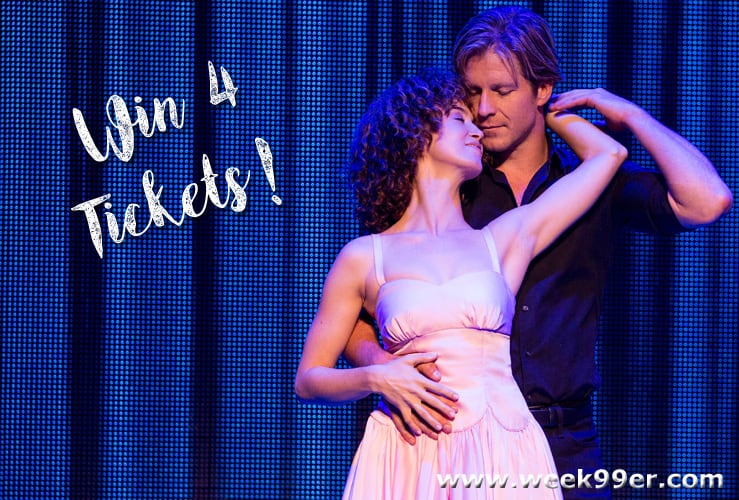 It was a movie that shaped a generation in the 80’s. There was hardly anyone who hadn’t seen Dirty Dancing. The (now) classic story filled with music, dancing and love has now made it’s way to the stage. Dirty Dancing – The Classic Story on Stage is coming to the Fox Theater in Detroit in March, and we’ve partnered with Olympia Entertainment to give away tickets for our local readers! Nobody puts Baby in the corner – and Dirty Dancing is going to be a great night at the theater with your friends or family. Find out more about the show below!

The staged production of the worldwide smash-hit film with live music, Dirty Dancing – The Classic Story On Stage will play at the Fox Theatre from Friday, March 24 through Sunday, March 25; as part of the Fifth Third Bank Fox Theatre Series.

Tickets ($30, $45, $55 and $70) are on sale now and can be purchased at OlympiaEntertainment.com, the Fox Theatre and Joe Louis Arena box offices, Hockeytown Authentics in Troy (without service charge) at all Ticketmaster locations and Ticketmaster.com. To charge tickets by phone, call (800) 745-3000. Fifth Third Bank Fox Theatre season subscription packages up to 20% and discounts for groups are on sale now, for details call (313) 471-3099. For additional information, call (313) 471-6611.

“As I learned how many people watched the movie over and over and over,” said Eleanor Bergstein, screenwriter of the film Dirty Dancing and book writer for the production, “I began to think that what they really wanted was to share more physically in the event, to step through the screen and be there while the story was happening. And if that was true, then its natural form was theatre – live audiences watching live bodies dancing and singing here and now in the present – on the log, on the bridge, on the dance floor and in the staff quarters at Kellerman’s. Writing it for the stage, I was also able to add more Baby and Johnny scenes, more about the family, more songs I couldn’t afford last time, and, best of all – more dancing. I have added 20 new original scenes, 36 numbers of live music and an eight piece band onstage, to invite the audience to come into Kellerman’s and experience the story as a live event as it happens.”

“Dirty Dancing is one of our most beloved and timeless properties,” said Lionsgate Television COO Sandra Stern. “Its magic has enchanted audiences on film, television, DVD and digital platforms alike, and it remains a perennial best-seller in our film and television library. We’re delighted to participate in the latest stage incarnation that will introduce Dirty Dancing to a whole new generation of fans, and we expect the stage play to prove yet again that nobody puts Baby in a corner.”

The production’s book is written by Eleanor Bergstein and the North American tour will be directed by James Powell with choreography by Michele Lynch based on the original choreography by Kate Champion.

Dirty Dancing – The Classic Story On Stage is an unprecedented live experience, exploding with heart-pounding music played live by an eight piece onstage band, passionate romance and sensational dancing. Seen by millions across the globe, this timeless love story features the hit songs “Hungry Eyes,” “Hey Baby,” “Do You Love Me?” and the heart-stopping “(I’ve Had) The Time Of My Life.” London’s Sunday Express says “This crowd-pleasing stage adaptation hits the jackpot!”

It’s the summer of 1963, and 17-year-old Frances ‘Baby’ Houseman is on vacation in New York’s Catskill Mountains with her older sister and parents. Mesmerized by the racy dance moves and pounding rhythms she discovers in the resort’s staff quarters, Baby can’t wait to be part of the scene, especially when she catches sight of Johnny Castle, the resort’s sexy dance instructor. Passions ignite and Baby’s life changes forever when she is thrown in to the deep end as Johnny’s leading lady, both on-stage and off.

Dirty Dancing – The Classic Story On Stage began as an eight-week staged workshop in Manhattan in the fall of 2001. It was first performed at the Theatre Royal in Sydney, Australia in November 2004 before embarking upon a hugely successful tour of Australia and New Zealand. A new production opened at the Theater Neue Flora in Hamburg, Germany in March 2006 where it broke records for achieving the highest advance in European history.

The production began performances on London’s West End in October 2006 with an £11 million advance and went on to become the longest running show in the history of the Aldwych Theatre. It closed in July 2011 in advance of a two-year UK national tour and then returned to London for a strictly limited season at the Piccadilly Theatre.

The show has gone on to perform across the world in markets as diverse as Utrecht, Holland, Johannesburg and Cape Town, South Africa. Most recently, it has been represented by a new UK tour (which launched March 2014 in Bristol), a German tour (which launched April 2014 in Berlin) and an Italian production (which launched October 2014 in Milan). The show returned to Australia with a new tour that premiered in late 2014 in honor of the stage production’s 10th anniversary.

Enter to win with the form below. Who will you take with you to see Dirty Dancing – The Classic Story On Stage? You have to answer this question to win! So make sure you leave a comment and then enter using the form below!

11 thoughts on “Win 4 Tickets to Dirty Dancing – The Classic Story On Stage at the Fox!”