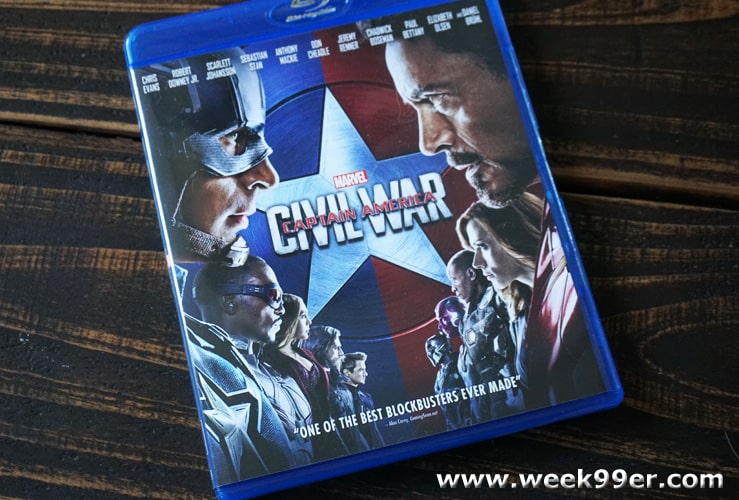 This summer Marvel asked fans to choose a side – Team Cap or Team Iron Man. Some of the biggest heroes in the Marvel universe are fighting with each other over what looks like one main issue, but ends up being several. Somehow, I wasn’t able to see this epic film while it was in theaters, my work schedule was too busy. And despite hearing all the raving from friends and family – I missed seeing Civil War on the big screen. Our team did review Captain America: Civil War for the site, but it wasn’t until Disney sent me a copy of the movie to  review.

Before you even watch Captain America Civil War, and know the story behind it, you already go in knowing which side you will stand on. Will it be the rich playboy with his technology or the soldier who is always fighting for what he thinks is right? The movie will have twists and turns that will make you question what if what you knew about your favorite character is even true. With the introduction of some of other Marvel characters to the mix like Black Panther, Peter Parker and of course Ant Man, the teams get pretty epic. There are a couple spots that make Marvel fans scratch their heads (Aunt Mae’s age?) But overall the movie is cast well and a fantastic time to watch. For me, due to the length of the movie – watching at home was a better option since I could pause it and take a bathroom break and not miss a minute of the action.

More than 60-minutes of thrilling, exclusive bonus material includes: an inside look at the evolution of lead characters Steve Rogers and Tony Stark, a behind-the-scenes exclusive on the making of Marvel’s “Captain America: Civil War,” never-before-seen deleted scenes and hilarious outtakes. Plus, home audiences can learn more about the latest additions to the MCU and get an exclusive, first look at Marvel’s “Doctor Strange,” starring Benedict Cumberbatch, coming to theaters Nov. 4, 2016.

You can get Captain America: Civil War on Blu-Ray, DVD and Digital HD now. The movie has a total run time of 147 minutes and is rated PG-13.

*Bonus features may vary by retailer. The DVD does not include any bonus materials.