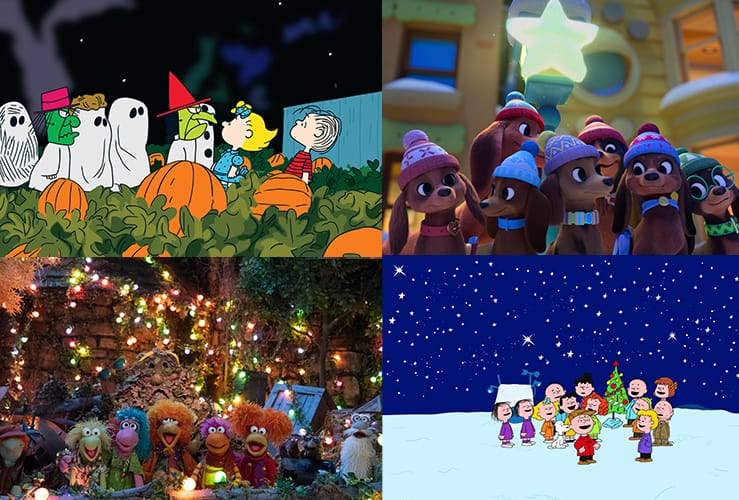 It’s that time of year again – it’s time to pull out the holiday classic movies to watch with your kids. And with Halloween, Thanksgiving, Christmas and so many other holidays happening over the next few months – you may wonder where to find these classic movies and shows. We’re getting ahead of the game and releasing a list of all of the holiday favorites for your family that will be on AppleTV+ and when you can stream them!

Costumes, candy, this classic special – some things just scream Halloween. Join the Peanuts gang for a timeless adventure as Charlie Brown preps for a party, Snoopy sets his sights on the Red Baron, and Linus patiently awaits a pumpkin patch miracle.

“Fraggle Rock: Back to the Rock” Night of the Lights Holiday Special – Premieres Friday, November 18

It’s the Night of the Lights, the most Fraggily holiday of the year, and the Rock is filled with songs and cheer. When Jamdolin (voiced by Emmy Award-nominee Daveed Diggs, “Hamilton”) encourages Wembley to make a special wish, the Fraggle head out on an adventure to find the brightest light and, maybe, the true meaning of the holiday. Jim Henson’s fun-loving and musical Fraggles – Gobo, Red, Wembley, Mokey, Boober, and new Fraggle friends – have returned for all new adventures about the magic that happens when we celebrate and care for our interconnected world. From The Jim Henson Company, the series is executive produced by Lisa Henson, Halle Stanford, John Tartaglia, Matt Fusfeld, and Alex Cuthbertson; Dave Goelz and Karen Prell co-executive produce; Harvey Mason Jr. is the executive music producer. The special is produced by Ritamarie Peruggi.

In “Happy Thankful Day,” while preparing for a special Sagoville festival, Harvey and Robin accidentally end up in Loomington – a town without gratitude. Produced by Spin Master Entertainment, animated by 9 Story Media Group’s Brown Bag Films – Toronto, and based on the award-winning Sago Mini World app, developed by Sago Mini, the “Sago Mini Friends” series is an adorable nod to gratitude, featuring Harvey the floppy- eared dog and his best friends, Jinja the cat, Jack the rabbit, and Robin the bird. Along with a unique cast of residents as colorful as their own whimsical world, the four friends play, explore, imagine and celebrate daily in their joyful town of Sagoville. In each episode, Harvey and all his friends express their true thankfulness for all things, big and small, through optimism, kindness, preschool-friendly humor and unforgettable original songs! The animated preschool series is executive produced by Jennifer Dodge, Ronnen Harary, Tone Thyne, Dustin Ferrer, Laura Clunie and Toni Stevens, with Chad Hicks as series director. Dr. Sonja Lyubomirsky serves as the gratitude expert on the series through Apple TV+’s changemakers initiative.

In this Peanuts classic, Peppermint Patty invites everyone to Charlie Brown’s for Thanksgiving, even though he’s going to see his grandmother. Snoopy decides to cook his own version of a Thanksgiving meal with help from his friends.

In the holiday special, “A Chicken Carol,” Ebenezer Wolf decides to cancel the holidays so, Piper teams up with the Three Little Pigs and some ghostly friends to change his mind. This animated preschool series which debuts globally on Apple TV+ November 18 is based upon “Interrupting Chicken,” the 2011 Caldecott Honor-winning book series written and illustrated by David Ezra Stein, introduces children to the joy of storytelling – starting with a young little chicken named Piper who has a habit of interrupting storytime! Every time Piper hears a story, she can’t help but jump in, ask questions and let her imagination run wild as she tries to fill in details, guess what happens next or insert herself in the middle of the action to help save the day. In partnership with Mercury Filmworks, “Interrupting Chicken” is executive produced by Ron Holsey, David Ezra Stein, Loris Kramer Lunsford, Clint Eland and Chantal Ling, and stars the voice talents of Sterling K. Brown. Dr. Lucy Calkins serves as reading and writing expert through the Apple TV+ changemaker initiative.

In “Merry Muttgomery!,” when a heavy snowfall jeopardizes the annual holiday festival, the pups find unique ways to celebrate with all the snowed-in dogs in the city. Based on the beloved canine from the classic book “Pretzel” by award-winning authors Margret and H.A. Rey, creators of “Curious George,” the original series follows a modern dog family led by stay-at-home dad Pretzel, his five adorable Dachshund puppies, and mom Greta, the mayor of Muttgomery. Together, the Doxiesare always sniffing out ways to “make their bark” on their doggie hometown and make it a better place for their four-legged friends and neighbors. Pretzel and Greta encourage their pups to try to solve their own problems, often reminding them to “Get those PAWS UP!” whenever they face a challenge. Voice talent includes Mark Duplass, Nasim Pedrad, and many more. Hailing from HarperCollins Productions and animated by House of Cool and Saturday Animation, the series is executive produced by Caroline Fraser, Ricardo Curtis, Wes Lui and Steve Altiere; Jennifer Contrucci co-executive produces. Dr. Tony Wagner serves as the play, passion, purpose expert through the Apple TV+ changemaker initiative.

In “Happiness Is the Gift of Giving,” Snoopy adapts a Christmas poem to help Sally sleep, Charlie Brown makes gifts for his pals, and Snoopy finds waiting to open his presents a challenge. An Apple TV+ original series from Peanuts and WildBrain, “The Snoopy Show” gives the world’s most iconic dog his close-up and dives into new adventures with the happy-dancing, high-flying, big-dreaming beagle, who’s joined by best friend Woodstock and the rest of the Peanuts gang. Josh Scherba, Anne Loi, Stephanie Betts, Paige Braddock, Craig Schulz and Mark Evestaff serve as executive producers. Alex Galatis serves as story editor.

All Rerun wants from Santa is a dog, but his mother won’t let him have one. Spending time with Snoopy provides the perfect pick-me-up. But when Snoopy gets too busy to play with Rerun, they call in a substitute—Snoopy’s brother Spike.

Celebrate the merriest time of the year with the Peanuts gang. Snoopy, Charlie Brown, Linus, Lucy, and Sally each star in a collection of Christmastime tales from the original Peanuts comic strips.

In this beloved Peanuts special, feeling down about the commercialism of Christmas, Charlie Brown becomes the director of the gang’s holiday play. Can he overcome his friends’ preference for dancing over acting, find the “perfect” tree, and discover the true meaning of Christmas?

“The Boy, the Mole, the Fox and the Horse” – Premieres Sunday, December 25

A story of kindness, friendship, courage and hope for viewers of all ages in a heart-warming, classically animated film based on Charlie Mackesy’s book, “The Boy, the Mole, the Fox and the Horse.” The poignant and heartfelt journey follows the unlikely friendship of a boy, a mole, a fox and a horse traveling together in the boy’s search for home. The film, featuring Mackesy’s distinctive illustrations brought to life in full color with beautiful hand-drawn animation, stars BAFTA Award winner Tom Hollander (“The Night Manager”) as The Mole, Golden Globe and SAG Award winner Idris Elba (“Luther”) as The Fox, Golden Globe Award winner Gabriel Byrne (“All Things Bright and Beautiful”) as The Horse, and newcomer Jude Coward Nicoll as The Boy. Matthew Freud presents a Charlie Mackesy film, produced by Emmy Award winner and Academy Award nominee Cara Speller (“Love, Death & Robots,” “Pear Cider and Cigarettes,” “Rocket & Groot”) of NoneMore Productions and Emmy Award winner J.J. Abrams and Hannah Minghella of Bad Robot Productions. Directed by Peter Baynton (“The Tiger Who Came To Tea”) and Charlie Mackesy, the film is adapted from the original book in collaboration with Jon Croker (“Paddington 2”). The film is executive produced by Jony Ive and Academy Award nominee Woody Harrelson (“Three Billboards Outside Ebbing, Missouri”). Original score by composer Isobel Waller-Bridge, performed by the BBC Concert Orchestra and conducted by Geoff Alexander. The film is presented in partnership with the BBC, who will premiere “The Boy, the Mole, the Fox and the Horse” in the UK, with the film available on Apple TV+ outside of the UK, this Christmas.