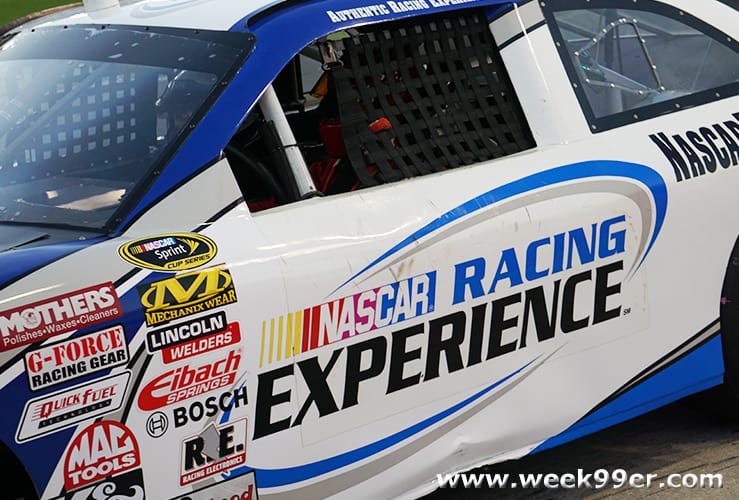 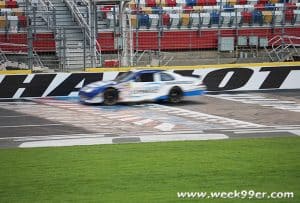 While in Charlotte, NC for Disney and Pixar we got to experience riding in a NASCAR at the Charlotte Motor Speedway. Yes, you actually ride in a NASCAR car on an an actual NASCAR track. While the thought of driving the car may be appealing to some, just the thought of whipping around the the track at the high rate of speed was a little intimidating. The speeds and the banking (or angle) of the track would make it not easy for anyone to do their first time out.

The Charlotte Motor Speedway offers not only the track we know from the current NASCAR races, but are actually starting a new figure 8 style track that will launch for the sport soon. On the property is also a drag strip track is used as well. We were given a tour of the property before our ride along, and that included a trip around the track as well as a drag strip race with the other tour bus. Anything for speed! 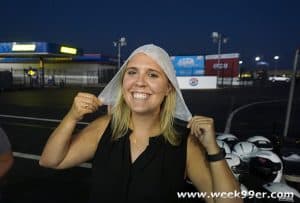 You’re not allowed to do the NASCAR Racing Experience without wearing the proper safety gear, and a head sock that is very stylish. The ride along experience does require you to sign a few liability waivers, but they will take every effort to make sure you’re safe on your ride.

NASCAR cars don’t have doors – this is something that fans probably know. Riders, and in our case passengers have to climb in through the window. This isn’t as easy as it sounds, but once you’re inside the car it is surprisingly roomy. Inside the cab is extremely loud, really the stock car doesn’t have any insulation or anything that could add weight and possibly slow the car down. This means the driver really has their instrument panel, seat, harness and a cooling system. Because of the lack of interior construction and insulation – it can get to around 130 degrees inside the vehicle and often CO2 can get inside after a long duration of driving. I was shocked at how loud and how warm it was inside, and I couldn’t even hear my driver when he did talk to me. 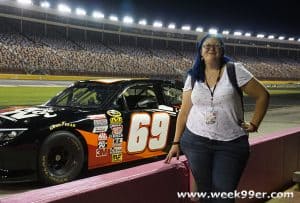 I noticed that once I got into the car, all apprehension melted away. We took off and made it around the first corner the speed became a thrill and it was amazing how fast the whole experience way – both in time and speed. We topped 170 miles an hour, and I found myself smiling like a fool. It was definitely a once in a lifetime experience, that I would do any day of the week!

While it’s fun to ride around the track a few times, the amount of heat and noise the driver experiences is amazing. The endurance NASCAR drivers need to not only maintain their speed but their awareness while they race isn’t something that everyone can do.

Check out more images from our ride along experience and find out how you can experience it on the Charlotte Motor Speedway Ride Along website: