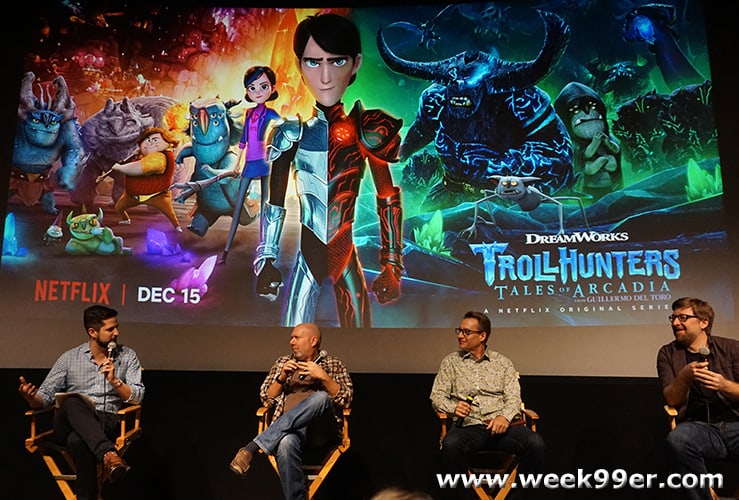 Trollhunters was original visualized as a feature film, but once they started working on the stories they realized there was more to the world than any feature could cover. Now part of the Trollhunters Tales of Arcadia trilogy, the second season is now streaming on Netflix and fans are able to pick up where season one left off. it is one of the most watched kids series on Netflix, and kids aren’t the only fans. We were able to sit down with Marc Guggenheim (Arrow, Legends of Tomorrow), Rodrigo Blaas (Alma), and Chad Hammes (Dragons: Race to the Edge) Executive Producers on the series about what it took to put together season 2 of the series, and what we can expect with the new trilogy.

How has the reaction been over the last year? 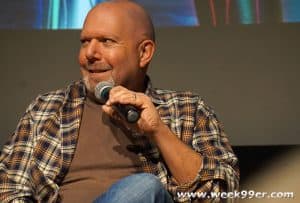 It’s been amazing, it’s taken a long time to get to the screen. The kids and the family really latch onto it. This day and age you can have a connection with your audience with social media. You can really see the kids dancing to Toby’s dance, and having them build these forts. Or to dress like Claire and Jim. All of this stuff is beyond our expectations.

Has anything surprised you about the audience reaction?

Hammes: Yah that they liked it.

Guggenheim: I think Rodrigo hit on it, the lead time on something like this huge. I’ve been working on the project for six years now. You’re working so far ahead of the audience, you’re just hoping and praying that people like it half as much as you do. And it turns out they like it a whole lot more than we do. It’s incredibly gratifying.

In Season 2 you’re really expanding the world of Trollhunters by opening up the Darklands, in these first episodes you introduce new characters and environments. What were some of the creative challenges in building this new world and expanding it? 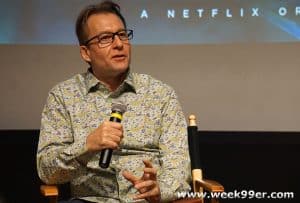 Blaas: Two walls and a hallway

Guggenheim: This place is massive, it’s incredible. The Troll Market is tiny in comparison. When we first started talking about it, it literally was two walls and a hallway. It’s a lot more than that.

Blass: This lets us really expand our narrative. I think the audience is growing with us, they want to go to a bigger world and we want to too.

Hammes: Season two narratively allows us to divide our team up and expand our stories. they’re all working together but they’re all separate. It made it interesting for our writers too. To get all of our characters to stand on their own and define themselves as individuals instead of just Jim and the group. I think that is one of the stronger points of season 2. And it allowed us to develop a evil side. There’s a team of baddies for our trollhunters to go after. It gave us a canvas that is more rich.

Blaas: It was a great way as well to see Jim make a choice at the end of Season 1 and realize that results in the next season.

What can fans expect out of this season? 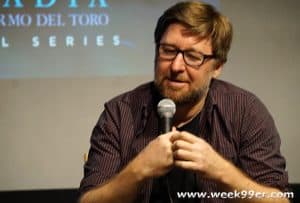 Season 1 was about setting up who the characters were and the creation of the team. What I’m excited about Season 2 is we take everything that was put in place and we just get to play in season 2. Not just against the backdrop of the Darklands which is amazing, but also in Arcadia where you find different kinds of trolls and different kinds of places.

Blaas: We set up the premise of the hero, the best friend and the love interest and we want to reverse all that. We see Claire come into full use of her powers. We have that canvas to actually do that. That’s the beauty of the next season. The characters will surprise you.

By the end of Season 1 they were in their grove and their crew. In Season 2 you break them up – what is the thought process?

Guggenheim: We wanted to challenge them. In the end your story is only as good as the challenges you give them. The solution to their problem depends a lot on the teams relationship. The point is when this was a movie, Argh was turned to stone and Blinkie came in with a spell to cure him. Argh definitely gets to come back and it’s fun.

Hammes: We seeded a lot in the first season. There’s a lot to digest there, and a lot of little scenes we bring back. There are changelings we get to address and new forms of goblins.

Blaas: There’s a beauty to the evilness of that world.

Obviously we all love Jim, Will we see Toby and Claire come into their own more?

Guggenheim: One of the things we came into this series we wanted this to be a serialized show. The characters you meet in the first episode are very different than the end of season one. And that evolution continues into season 2 and beyond. Toby and Claire start out as these very cliche stereotypes the loyal best friend and the token girl. The truth is Toby and Claire evolve through season 1 but really do in Season 2. They are fully dimensionalized problems and stories. Heroes in their own rights. This helps us build the foundation you’ll find all the way to series three – Wizards. It’s nice to play the long game.

DreamWorks Trollhunters Part 2 is now on Netflix, look for all of the details and foundation for the rest of the Tales of Arcadia trilogy!

In Part 2 of the epic saga DreamWorks Trollhunters, ordinary teen-turned-Trollhunter Jim Lake Jr. faces new challenges in his continued battle to protect his hometown of Arcadia and the fantastical Troll world he inherited. Jim’s risky decision to enter the Darklands unearths startling discoveries, forcing him and his friends to face gripping consequences as they race to end the battle against evil.

This global family viewing event from acclaimed filmmaker Guillermo del Toro will bring viewers of all ages together, debuting only on Netflix, Friday, December 15.

The Netflix original series premiered on Dec 23, 2016, with the first-ever 26-episode debut, which lead the Creative Arts Daytime Emmys with six wins, more than any other program, including writing for an animated program (Marc Guggenheim), directing (Rodrigo Blaas, del Toro), casting (Ania O’Hare, Mary Hildalgo) and a voice acting win for Grammer.