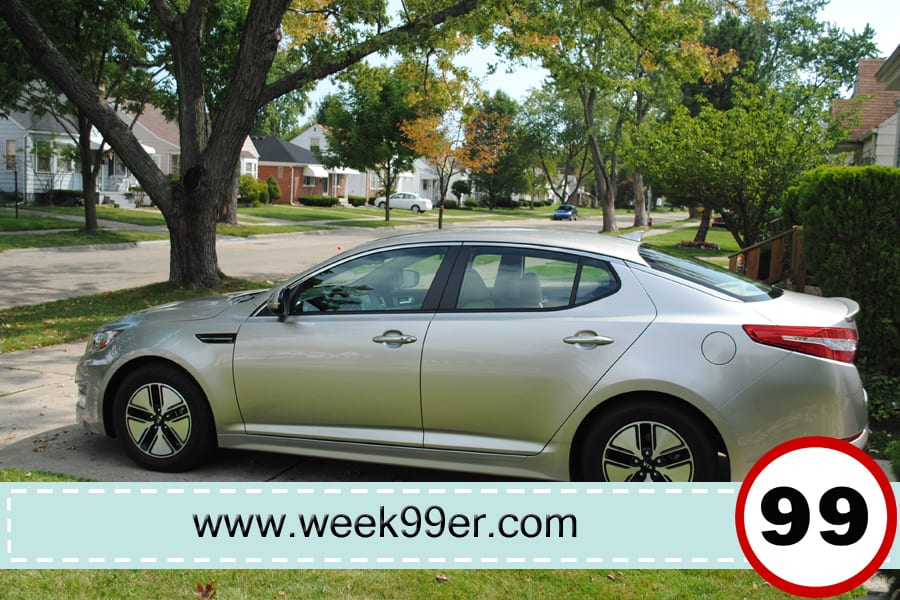 Have you ever seen a hybrid car and thought “well, maybe if it wasn’t so weird looking”? I know I have – the majority of the hybrid options out there are, well… egg cars. You can tell it’s a hybrid just by looking at it. The same cannot be said for the 2013 Kia Optima.

The Optima looks like any sporty sedan out there, and without driving it (and that little badge on the back), most people wouldn’t even suspect you’re driving a Hybrid. 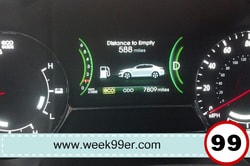 Before the Optima, I had never driven a Hybrid before. So the first time I pulled it out of my driveway I immediately put it in park and took a picture. I had 588 miles until Empty! I could drive to visit family on one side of the state and back and still have gas left over – that is an amazing concept!

The drive was smoother than I expected in the hybrid too. I had heard that they are more “choppy”. You could feel the engine switch from electric to gas at around 25 or 30 miles an hour but it wasn’t a major shift. And really, unless you knew what you were looking for – you couldn’t feel it at all. 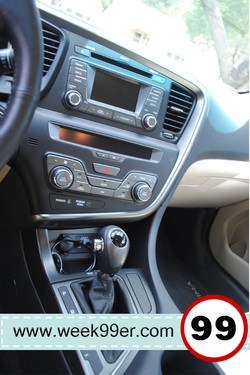 The inside of the car was just as slick as the outside. Not only did it feature back up assistance like several other Kia models – it features dual climate settings, an iPod dock, and satellite radio. It also had one of my favorite features, the shift to manual mode if needed. Thankfully, while using the Optima – we didn’t encounter any large hills!

The steering wheel also has controls for the radio, phone system and cruise control all within a quick reach. That combined with the hands-free control make sure you’re not a distracted driver on the road. 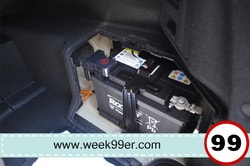 Another concern about Hybrid vehicles is the amount of storage space. While the car has one battery in the front with the engine, it has the auxiliary battery in the back. The battery is small, compact and easily accessible if needed. But at the same time the car features a large trunk space for all of your shopping needs.

To help keep the Optima’s weight ratio down, and your gas mileage down the car does not have a spare tire. Instead there is a place you can put one if you wanted to, and it is equipped with a tire repair kit. 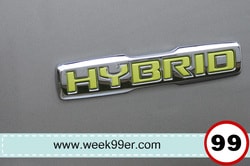 I really enjoyed the ride of the Kia Optima, you could tell it was different than a standard vehicle but the added fuel economy was fantastic! The only thing I noticed that was somewhat a negative was if the car does go into using gas your miles until empty drop a lot faster. But that being said, the car is great for in town driving or someone who might be stuck in traffic jams to and from work a lot. The sedan seats 5 comfortably and would be a great car for a small family, with decent leg room in the back and space for items.

So where did we go in 588 miles? We didn’t have a big trip planned, but we had plenty of local errands to run!

And while we drove around town, back and forth, and to several places we have to go to during the week, I watched the miles left until E slowly drop. I was amazed that at what would take a full tank of gas after a week in my car hardly took miles off the Optima. I even returned the vehicle with about 250 miles left on it until empty. My car would need another tank of gas, while the Optima would keep going for another week’s worth of errands. With the current cost of gas – that is a definite benefit right now!