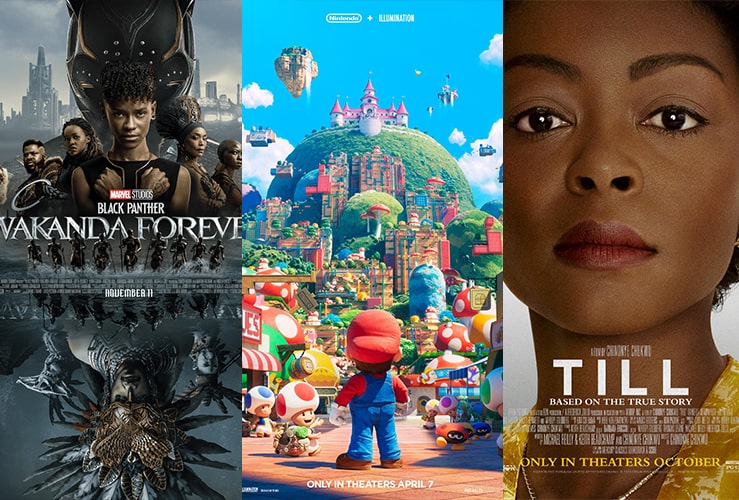 Haunted houses, screenings for scary movies, and new movie announcements! We’ve got a lot of great updates this week in entertainment. Check out the new trailers, announcements, and the chance to grab those screening passes!

Check out the latest movie release schedule to find out when the movies you want to see will be hitting the big screen and streaming channels.

Walt Disney Animation Studios today announced that it will team with Lighthouse Immersive Studios, the producers of the blockbuster Immersive Van Gogh, to develop Disney Animation Immersive Experience, which will receive its world premiere in Toronto this December and then can be seen across the United States and other areas of the world in the next year.

Creating iconic animated stories for all ages for nearly a century, Walt Disney Animation Studios will join forces with North America’s top creator of experiential projection exhibitions to present the music and artistry within Disney Animation’s canon of films—from hits of today like Encanto, Zootopiaand Frozen, to all of the classics including The Lion King, Peter Pan and Pinocchio. Audiences will feel like they’ve entered the incredible worlds of beloved Disney characters and become one with them.

Disney Animation: Immersive Experience will debut at Lighthouse ArtSpace Toronto in December 2022, and will subsequently be seen in Cleveland, Nashville, Detroit, Denver, Boston, San Antonio, Las Vegas, Minneapolis and Columbus in the first four months of 2023. Additional cities are currently being scheduled and Tokyo will be the first city outside of North America to receive Disney Animation: Immersive Experience.

“The collaboration with Lighthouse Immersive is a first for Disney Animation,” said Clark Spencer, president, Walt Disney Animation Studios and two-time Academy Award®-winner (Encanto, Zootopia). “It’s a dream to bring the best of animated storytelling together with the top experts in the immersive art experience. We can’t wait for audiences around the world, of all ages, to experience the great moments from our legacy of feature films in this incredible way.”

“Like so many of us, I have a life-long love of Disney films,” said Lighthouse Immersive founder Corey Ross. “I’ve grown up with them since childhood and so has my family. The work lends itself brilliantly to the immersive experience and I am confident this program will give our guests the opportunity to be engulfed in the world of Disney, making them feel like they’re standing next to their favorite characters and seeing the world through their eyes.”

The creative team for the Disney Animation Immersive Experience is led by Oscar®-winning producerJ. Miles Dale (Best Picture 2018 –The Shape of Water) who said, “Trailblazing in a new medium is always exciting, and this is truly going to be the most challenging and rewarding project of my career. Being entrusted with Disney’s rich archive of animation is a great honor, but also a tremendous responsibility. With such a wealth of material and a treasure trove of memorable characters, it will be a thrill to bring the work of all the great Disney animators and performers to life in a 360-degree immersive environment.”  Mexico City-based Cocolabis working with Dale and the Creative Legacy team at Walt Disney Animation Studios to develop the program for Lighthouse Immersive Studios. Special Projects Producer Dorothy McKim (Oscar-nominated, Get A Horse!) is spearheading the project for Disney Animation.

The audience experience will be further enhanced by Lighthouse Immersive’s Global Creative Director David Korins, (Tony Award®-nominee whose credits include more than 20 Broadway shows including Hamilton,and an Emmy Award® winner for Grease Live). Korins will develop never-before-seen interactive lobby elements that guests can enjoy before or after entering the gallery.

Ross captures the excitement both Disney and Lighthouse Immersive feel for the project as he describes how it begins: “Just imagine journeying through Zootopia with Judy Hopps, diving to the ocean floor with Ariel, flying on a magic carpet with Aladdin, and stepping into Casita with Mirabel and the family Madrigal. This is where the Disney Animation: Immersive Experience will take you.”

Collaborating with Lighthouse Immersive is the Creative Legacy team of Walt Disney Animation Studios, helping bring their library of films to audiences in a manner never before experienced.

The schedule of openings, on-sale date for tickets and prices will be announced at a future date. The public can sign up to receive more information at disneyimmersive.com.

Now Streaming: Abominable and The Invisible City Available on Peacock and Hulu

Abominable and The Invisible City is a comedy adventure series that continues the wild and wooly fun of DreamWorks Animation’s Abominable. Through Everest the yeti, Yi, Jin, and Peng know that there’s a whole magical world out there, and now it’s even closer than they think! When they discover that their surroundings are teeming with magical creatures in need of their help, the kids will set out on extraordinary and heartfelt adventures throughout their city and beyond.

Based on a true story, this riveting thriller follows Jason Derek Brown (Tom Pelphrey), a charismatic con man bankrolling his extravagant lifestyle through a series of scams. On Brown’s trail: Lance Leising (Ryan Phillippe), a dogged FBI special agent determined to put Brown behind bars. When Brown’s funds run low and his past catches up with him, he plots his most elaborate scheme yet, pitting himself against Leising in a deadly game of cat and mouse — and becoming the most unlikely and elusive fugitive on the FBI’s most-wanted list.

Till is a profoundly emotional and cinematic film about the true story of Mamie Till Mobley’s relentless pursuit of justice for her 14 year old son, Emmett Till, who, in 1955, was lynched while visiting his cousins in Mississippi. In Mamie’s poignant journey of grief turned to action, we see the universal power of a mother’s ability to change the world.

Tickets are now on sale for Marvel Studios’ “Black Panther: Wakanda Forever,” the action-packed feature film that ventures back to the kingdom of Wakanda where a new threat emerges from a hidden undersea nation called Talokan. A brand-new trailer, poster and images also debuted today and are available to download.

Fans counting the days to the film’s November 11 release can purchase tickets wherever tickets are sold.  Now fans, communities and organizations can arrange group bookings and theater buy-outs by visiting: WakandaForeverTickets.com

In the film, Queen Ramonda (Angela Bassett), Shuri (Letitia Wright), M’Baku (Winston Duke), Okoye (Danai Gurira) and the Dora Milaje (including Florence Kasumba) fight to protect their nation from intervening world powers in the wake of King T’Challa’s death. As the Wakandans strive to embrace their next chapter, the heroes must band together with the help of War Dog Nakia (Lupita Nyong’o) and Everett Ross (Martin Freeman) and forge a new path for the kingdom of Wakanda.Introducing Tenoch Huerta as Namor, king of Talokan, the film also stars Dominique Thorne, Michaela Coel, Mabel Cadena and Alex Livinalli.

From 87North, the bare-knuckle producers of Nobody, John Wick, Atomic Blonde, Deadpool 2, Bullet Train and Fast & Furious Presents: Hobbs & Shaw comes a coal-dark holiday action-comedy that says you should always bet on red.

When a team of mercenaries breaks into a wealthy family compound on Christmas Eve, taking everyone inside hostage, the team isn’t prepared for a surprise combatant: Santa Claus (David Harbour, Black Widow, Stranger Things series) is on the grounds, and he’s about to show why this Nick is no saint.

Universal Pictures will distribute the film in all territories.

Focus Features announced today that it has acquired and will release INSIDE, a psychological thriller starring Academy Award® nominee Willem Dafoe in filmmaker Vasilis Katsoupis’s directorial debut, on March 10, 2023. Ben Hopkins wrote the script based on an original idea by Katsoupis.  The deal was negotiated by Bankside’s Stephen Kelliher on behalf of the filmmakers.

Creator-Director Katsoupis and Karnavas, the critically acclaimed producer of Greek boutique production and sales outfit, Heretic, whose credits include the Cannes Palme d’Or winner Triangle of Sadness, La Semaine de la Critique winner Feathers and Greece 2022 Academy Award® entry Magnetic Fields, said in a joint statement, “It’s a dream to have made this film, the way we wanted to, having the priviledge to work with Willem and all these amazing filmmakers that supported us.  Focus is the perfect place for the film, and we can’t wait to share it with the world.”

INSIDE tells the story of Nemo, an art thief trapped in a New York penthouse after his heist doesn’t go as planned. Locked inside with nothing but priceless works of art, he must use all his cunning and invention to survive.

“With INSIDE, Focus continues our commitment to first-time and international filmmakers,” said Kiska Higgs, President of Production & Acquisitions at Focus Features.  “Vasilis’s thought-provoking film explores an experience we’re all now familiar with – isolation – and explores it in a visually stunning way.”

Currently in production for the studio is Asteroid City, the star-studded feature reuniting Wes Anderson and Focus for the first time since Moonrise Kingdom, and Lisa Frankenstein from debut feature filmmaker, Zelda Williams, written by Academy Award and Tony winner, Diablo Cody, and starring Cole Sprouse and Katheryn Newton.