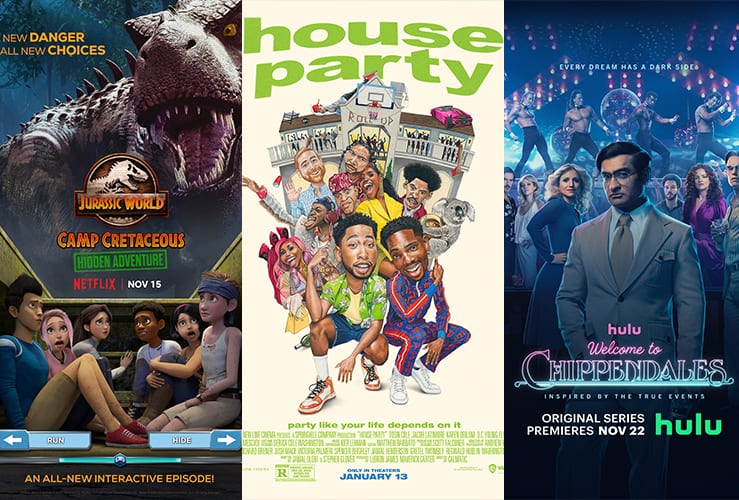 We’ve only got a few more scary season movies hitting theaters, but there’s a lot coming this fall and into the winter months. But this week we have a lot of great things including new screenings, more reviews, and so many great movies coming our way!

Jonathan Rhys Meyers (Vikings) and Academy Award® Winner Jon Voight (Coming Home) star in this nail-bitingly suspenseful thriller filled with twists and turns. A family reunion at a remote mansion takes a lethal turn when they are trapped inside and forced to play a deadly survival game where only one will make it out alive.

As children prepare their costumes and parents plan for a night of trick-or-treating, kids can also watch some of their beloved PBS KIDS characters celebrate Halloween in A DONKEY HODIE HALLOWEEN, available to stream now on the PBS KIDS Prime Video Channel. In this new special, it’s Purple Panda’s first Halloween in Someplace Else, but he’s afraid because he doesn’t know what to expect. Donkey Hodie is here to help! She prepares Panda for all the things he’ll see on Halloween while their neighbors make it extra special.

Other Halloween themed shows streaming now on the Channel include:

Halloween is coming and Caillou has so much to look forward to. From finding the perfect pumpkin to picking a costume, this spooky holiday is full of ways Caillou can use his imagination.

Children can join their favorite PBS characters as they celebrate Halloween in this creepy collection of stories from DINOSAUR TRAIN, NATURE CAT, READY, JET, GO! and PEG + CAT.

THE BERENSTAIN BEARS: TRICK OR TREAT

Join the Bear Family for fun-filled Halloween adventures. From trick-or-treating around the neighborhood to taking a trip to a haunted lighthouse, Brother and Sister learn that seemingly scary things can be fun.

The PBS KIDS PRIME VIDEO CHANNEL offers over 3,000 episodes of educational and entertaining shows and shorts for kids ages 2-8.  Children can watch anytime, anywhere on their favorite devices, making it the largest library of PBS KIDS programming to stream anywhere – all housed in one place. The subscription rate is $4.99/month with an Amazon Prime or Prime Video subscription. Every purchase supports public television for all. Families and kids can also stream full episodes of shows for free on PBS KIDS.

Hold Me Tight – Screening in Detroit October 22nd at the DIA

Adapted from a stage play by Claudine Galéa, HOLD ME TIGHT stars Vicky Krieps as Clarisse, a mother coping with great emotional upheaval, and Arieh Worthalter (Girl) as Marc, the husband she leaves behind. Krieps gives a riveting performance as a woman on the run from her family for reasons that aren’t immediately clear. Amalric’s sophisticated narrative alternates between scenes of Clarisse’s road trip and of Marc as he cares for their two children, Paul, and Lucie, a pianist prodigy. While giving clues along the way, Amalric keeps viewers uncertain as to the reality of what they’re seeing until the film’s final moments.

With a dual career as an acclaimed actor (The Diving Bell and the Butterfly, A Christmas Tale, Quantum of Solace) and a writer-director (Barbara, The Blue Room, On Tour), Amalric’s sixth directorial outing is a daring, poignant and unpredictable story about love, absence, grief, and memory. Luxembourg-born actress Vicky Krieps came to international attention with her performance opposite Daniel Day-Lewis in Paul Thomas Anderson’s Phantom Thread and has since starred in Bergman Island by Mia Hansen-Love, Old by M. Night Shyamalan, and the upcoming Corsage by Marie Kreutzer.

See How They Run Arrives on Digital November 1

Welcome to the greatest murder ever staged! It is the West End of London in the 1950s, and plans for a movie version of a smash-hit play have come to an abrupt halt after a pivotal member of the crew is murdered. When world-weary Inspector Stoppard (Sam Rockwell) and his eager rookie sidekick, Constable Stalker (Saoirse Ronan), take on the case, the two find themselves thrown into a puzzling whodunit within the glamorously sordid theatre underground. The more they investigate the mysterious homicide, the more they realize that they do so at their own peril.

THE MINUTE YOU WAKE UP DEAD – In Select Theaters, On Demand, and Digital November 4

Starring Morgan Freeman (Million Dollar Baby), Jaimie Alexander (Thor), and Cole Hauser (“Yellowstone”), this sexy, riveting noir thriller will keep you guessing. After a shady small-town stockbroker begins dating a shy waitress, a shocking murder takes place — and one of them may be responsible. As word spreads that there’s money behind the killing, every criminal in town wants their share of the cash. One shocking plot twist follows another, and a bloody showdown leads to a mind-blowing finale.

Mel Gibson stars as a provocative and edgy overnight radio host who must play a dangerous game of cat and mouse with a mysterious caller who has kidnapped his family and is threatening to kill them and blow up the whole station… all while live on air.

In the film, Queen Ramonda, Shuri, M’Baku, Okoye and the Dora Milaje fight to protect their nation from intervening world powers in the wake of King T’Challa’s death. When Namor, king of a hidden undersea nation, alerts them to a global threat and his disturbing plan to thwart it, the Wakandans band together with the help of War Dog Nakia and Everett Ross and forge a new path for the kingdom of Wakanda. “Black Panther: Wakanda Forever,” directed by Ryan Coogler and produced by Kevin Feige and Nate Moore, opens in theaters November 11, 2022. Tickets are on sale now wherever tickets are sold. Fans, communities and organizations can arrange group bookings and theater buy-outs by visiting WakandaForeverTickets.com.

“I am so excited for our audience to rejoin our Camp Fam back amongst the ruins of Jurassic World,” said executive producer Scott Kreamer. “Set between seasons two and three, fans will be put in Darius’s shoes, and just like in Camp Cretaceous, they’ll be forced to make life-and-death decisions that quite literally can mean the difference between him and the other campers surviving, or getting chomped.  Not only will we be interacting with fan-favorite dinosaurs from the series, but we’ll also be visiting never-before-seen areas of Isla Nublar, as well as coming face to face with a large carnivorous theropod never previously shown on our show or the films. I think folks are really gonna enjoy it!”

A sprawling true-crime saga, “Welcome to Chippendales” tells the outrageous story of Somen “Steve” Banerjee, an Indian immigrant who became the unlikely founder of the world’s greatest male-stripping empire—and let nothing stand in his way in the process.

While investigating a terroristic threat that goes viral online, Korean authorities discover that a suspect has recently boarded an international flight bound for the United States. When a healthy passenger on the same flight suddenly dies a gruesome death of unknown cause, panic erupts both in-flight and on the ground. With steadily decreasing fuel and international refusals to offer aid, the captain and crew will be forced to take unprecedented emergency measures in an attempt to save the lives of their passengers.

Disney+ has released the trailer and key art for “Diary of a Wimpy Kid: Rodrick Rules,” an all-new animated movie based on the second book in Jeff Kinney’s wildly popular book series. The original song from the film, “Can You Smell Us Now,” written and produced by Jon Levine, with lyrics by Jeff Kinney, and performed by Jimmy Tatro, is also available. Be sure to check everything out, and don’t forget to watch “Diary of a Wimpy Kid: Rodrick Rules” on December 2, 2022, when it premieres on Disney+.

The riotous antics of angst-ridden, disaster-prone middle school student Greg Heffley continue in “Diary of a Wimpy Kid: Rodrick Rules,” focusing this time around on his complicated relationship with older brother Rodrick. A spikey-haired high school student, Rodrick is lazy and undisciplined and spends way too much time practicing with his rock band, Löded Diper. While he loves to torment Greg, he ultimately has a deep affection for his younger brother. Directed by Luke Cormican (“Teen Titans Go!) and written and produced by Jeff Kinney, “Diary of a Wimpy Kid: Rodrick Rules” features the voices of Brady Noon (“The Mighty Ducks: Game Changers”), Ethan William Childress (“mixed-ish”), Edward Asner (“Up”), Chris Diamantopoulos (“Silicon Valley”), Erica Cerra (“Power Rangers”), and Hunter Dillon (“Deadpool 2”). “Diary of a Wimpy Kid: Rodrick Rules” features the original song, “Can You Smell Us Now,” written and produced by Jon Levine, with lyrics by Jeff Kinney, and performed by Jimmy Tatro.

Diary of a #WimpyKid: Rodrick Rules, an all-new Original movie is streaming this December 2 exclusively on @DisneyPlus. pic.twitter.com/AXeelQd7a1

Director Spike Jonze delivers a stunningly original comedy that seamlessly blends fictional characters and situations with the lives of real people: obsessive orchid hunter John Laroche (Chris Cooper, in an Academy Award®-winning performance, 2002, Best Supporting Actor), New Yorker journalist Susan Orlean (Meryl Streep), Hollywood screenwriter Charlie Kaufman (Nicolas Cage), and his twin brother, Donald (also Cage). As Charlie struggles to adapt Orlean’s best-selling book “The Orchid Thief,” he writes himself into his own movie. The various stories crash into one another, exploding into a wildly imaginative film. ADAPTATION is at once a hilarious drama and a moving comedy, now celebrating its 20th anniversary.

Academy Award® is the registered trademark and service mark of the Academy of Motion Picture Arts and Sciences.

This 4K UHD release does not include a Blu-ray™

Julia Roberts, Dermot Mulroney, Cameron Diaz and Rupert Everett star in MY BEST FRIEND’S WEDDING, a high-spirited romantic comedy that serves up something wild, something new, something touching and something truly hilarious. Roberts dazzles as commitment-shy Jules Potter, who reluctantly realizes she is in love with her best friend Michael (Mulroney). There is just one catch: he’s about to marry someone else. Comically crazed and full of devious plans, Jules will do anything to steal him back… except tell him the simple truth.

In the 1970s, young Greg Laurie (Joel Courtney) is searching for all the right things in all the wrong places: until he meets Lonnie Frisbee (Jonathan Roumie), a charismatic hippie-street-preacher. Together with Pastor Chuck Smith (Kelsey Grammer), they open the doors of Smith’s languishing church to an unexpected revival of radical and newfound love, leading to what TIME Magazine dubbed a JESUS REVOLUTION.

After dominating the boxing world, Adonis Creed (Michael B. Jordan) has been thriving in both his career and family life. When a childhood friend and former boxing prodigy, Damian (Jonathan Majors), resurfaces after serving a long sentence in prison, he is eager to prove that he deserves his shot in the ring. The face off between former friends is more than just a fight. To settle the score, Adonis must put his future on the line to battle Damian – a fighter who has nothing to lose.

Creed III is the third installment in the successful franchise and is Michael B. Jordan’s directorial debut.