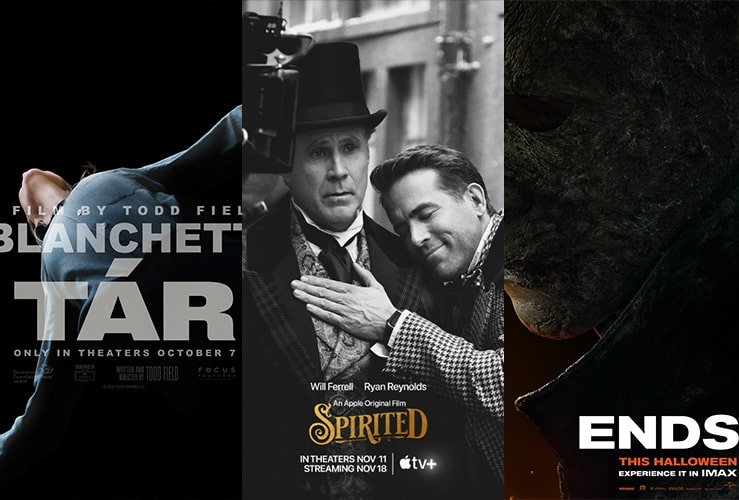 Scary movies, haunted houses and reviews – we’re deep into spooky season but we’re starting to get a look at the holiday releases as well! There are a lot of heavy titles and great movies coming our way.

Check out the latest movie release schedule to find out when the movies you want to see will be hitting the big screen and streaming channels.

Steve Asbell, President 20th Century Studios said, “’Planet of the Apes’ is one of the most iconic and storied science fiction franchises in film history, as well as being an indelible part of our studio’s legacy. With ‘Kingdom of the Planet of the Apes’ we are privileged to continue the series’ tradition of imaginative, thought-provoking cinema, and can’t wait to share Wes’ extraordinary vision for this new chapter with audiences in 2024.”

After witnessing a bizarre, traumatic incident involving a patient, Dr. Rose Cotter (Sosie Bacon) starts experiencing frightening occurrences that she can’t explain. As an overwhelming terror begins taking over her life, Rose must confront her troubling past in order to survive and escape her horrifying new reality.

DEVIL’S WORKSHOP – Select Theaters, On Digital, and On Demand This Friday, September 30

In this chilling psychological thriller featuring Emile Hirsch (Into the Wild), struggling actor Clayton (Timothy Granaderos) is desperate for a role as a demonologist. He contacts Eliza (Radha Mitchell, Man on Fire), an expert in devil lore, to help him prepare and spends the weekend at her home. Eliza forces Clayton to confront his troubling past, perform dark rituals, and sacrifice a goat. Does she want to help Clayton, seduce him—or destroy him? The shocking climax will set your soul ablaze.

Every now and again, spending like a little bit of money on something really special can definitely help make you smile. And that’s why I, like, commend Hulu for seeking us out at Alexis Rose Communications, because we totally get it.

Generally speaking, we at Alexis Rose Communications believe there is nothing wrong with asking for what you deserve. And after weeks and weeks of, like, heavy business negotiations with Hulu, I could absolutely not say no as a businesswoman. The world deserves the best. And I love that journey for them.

And now a special announcement. Boop.

Alexis Rose Communications is happy to bring you the world exclusive announcement that Hulu will be the official destination for Schitt’s Creek beginning October 3rd.

Co-created by Justin Roiland (“Rick & Morty”) and Mike McMahan (“Rick & Morty”, “Star Trek: Lower Decks”), “Solar Opposites” centers around a team of four aliens who are evenly split on whether Earth is awful or awesome. Korvo (Justin Roiland) and Yumyulack (Sean Giambrone) only see the pollution, crass consumerism, and human frailty while Terry (Thomas Middleditch) and Jesse (Mary Mack) love TV, junk food and fun stuff. In season three, this alien team strives to be less of a team and more of a family team.

From producer-writer-director Todd Field comes TÁR, starring Cate Blanchett as the iconic musician Lydia Tár. TÁR examines the changing nature of power, its impact and durability in our modern world

For one week only, kick off the Halloween season by returning to where it all began. Witness the FINAL showdown of this epic tale as Laurie Strode (Jamie Lee Curtis) finally puts an end to Michael Myers once and for all – in IMAX!

Four years after the events of last year’s Halloween Kills, Laurie is living with her granddaughter Allyson (Andi Matichak) and is finishing writing her memoir. Michael Myers hasn’t been seen since. Laurie, after allowing the specter of Michael to determine and drive her reality for decades, has decided to liberate herself from fear and rage and embrace life. But when a young man, Corey Cunningham (Rohan Campbell), is accused of killing a boy he was babysitting, it ignites a cascade of violence and terror that will force Laurie to finally confront the evil she can’t control, once and for all.

Nearly 5,000 years after he was bestowed with the almighty powers of the Egyptian gods – and imprisoned just as quickly – Black Adam (Johnson) is freed from his earthly tomb, ready to unleash his unique form of justice on the modern world.

After leaving NYC for his rural hometown of Bad Axe, Michigan, at the start of the pandemic, Asian American filmmaker David Siev documents his family’s struggles to keep their restaurant afloat. As fears of the virus grow, deep generational scars dating back to Cambodia’s bloody “killing fields” come to the fore, straining the relationship between the family’s patriarch, Chun, and his daughter, Jaclyn. When the BLM movement takes center stage in America, the family uses its collective voice to speak out in their conservative community. What unfolds is a real-time portrait of 2020 through the lens of one multicultural family’s fight stay in business, stay involved, and stay alive.

Buckle-up as the HBO Max dark comedy series that hooked audiences all around the world travels to your home as Warner Bros. Home Entertainment releases The Flight Attendant: The Complete Season 1 & 2 on DVD November 29, 2022. Follow all 16 episodes from seasons 1 and 2, plus more than an hour of bonus content that goes behind the scenes of the series for the ultimate fan! The Flight Attendant: The Complete Season 1 & 2 is priced to own at $39.99 SRP for the DVD. The series is also available to own on Digital via purchase from digital retailers.

Starring Kaley Cuoco, The Flight Attendant is a story of how an entire life can change in one night. A flight attendant (Cuoco) wakes up in the wrong hotel, in the wrong bed, with a dead man – and no idea what happened. The dark comedic thriller is based on the novel of the same name by New York Times bestselling author Chris Bohjalian.

The Flight Attendant is currently available to own on Digital. Digital purchase allows consumers to instantly stream and download to watch anywhere and anytime on their favorite devices. Digital movies and TV shows are available from various digital retailers including Prime Video, Apple TV, Google Play, Vudu and others.

STEM Activity Pack inspired by Blaze And The Monster Machines: Big Rig To The Rescue

Fuel your brain with this STEM Activity Pack inspired by Blaze And The Monster Machines: Big Rig To The Rescue, available on DVD on October 4! Click the link to join the fun: https://bit.ly/BlazeActivitySheets