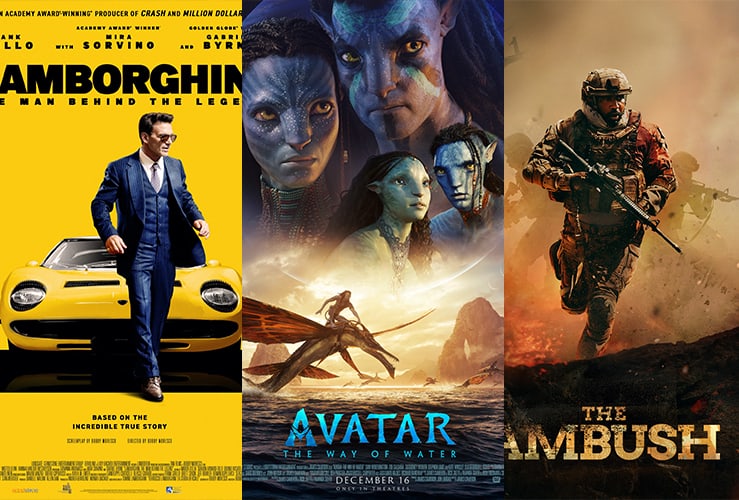 Screening opportunities, new trailers, and even more movie announcements. Find everything you may have missed this week in movies and show announcements!

Macey and Savanna may not have much. But they’ve got the perfect plan. With a ramshackle café teeter-tottering on the brink of extinction and their lives going nowhere fast, the two sisters conspire to win over their terminally ill Aunt Hilda – the family’s overbearing, curmudgeonly matriarch – in the hopes of becoming the beneficiaries of her vast estate. But as Macey and Savanna soon discover, there may be other relatives who have the exact same idea.

THE GRANDMASTER OF KUNG FU, streaming exclusively on Hi-YAH!

Near the end of the Qing Dynasty, a renowned Chinese martial artist engages in a life-or-death battle with a feared Japanese military commander in order to prevent Japan’s ultimate goal of seizing martial arts stronghold Tianjin.

Arriving this November on the PBS Documentaries Prime Video Channel are two original programs presenting major events that have affected the world in the past and today. In AMERICAN EXPERIENCE’s two-part miniseries, “Taken Hostage,” viewers will revisit the Iran hostage crisis, when 52 Americans were held hostage at the U.S. Embassy in Tehran. Unfolding like a political thriller, the story is told through the eyewitness accounts of those who took part in the events. In FRONTLINE’s “Putin’s War at Home,” audiences will watch as defiant Russians push back against Putin’s crackdown on critics of the war in Ukraine. In addition, viewers will explore the mysterious life and legacy of the pharaoh Tutankhamun in “Tutankhamun: Allies & Enemies,” while in NOVA’s “Zero to Infinity,” they will discover how the concepts of zero and infinity revolutionized mathematics.

The subscription rate for the PBS Documentaries Prime Video Channel is $3.99/month with an Amazon Prime or Prime Video subscription. Every purchase supports public television for all.

Unfolding like a political thriller, “Taken Hostage” tells the story of the Iran hostage crisis, when 52 American diplomats, Marines and civilians were held hostage at the American Embassy in Tehran on November 4, 1979. For the next 444 days, the world watched as the United States received a daily barrage of humiliation, vitriol and hatred from a country that had long been a close ally. Told through the candid, personal testimony of those whose lives were upended by the action, the crisis would transform both the U.S. and Iran and forever suspend the focus and direction of American foreign policy.

Defiant Russians push back against Putin’s crackdown on critics of the war in Ukraine. Facing arrest and imprisonment, these are the inside stories of activists and journalists refusing to stay silent and protesting the Kremlin’s war effort.

Marking the 100th anniversary of the unearthing of King Tutankhamun’s tomb by British archaeologist Howard Carter, this ambitious film is a journey of exploration and discovery. Egyptian co-hosts Yasmin El Shazly and Mahmoud Rashad delve into the mysteries and unanswered questions about the boy king’s life: the religious and cultural revolution started by his father, those advising him as he ascends to the throne at a very young age, and the circumstances around his untimely death.

Zero and infinity. These seemingly opposite, obvious and indispensable concepts are relatively recent human inventions. Discover the surprising story of how these key concepts that revolutionized mathematics came to be—not just once, but over and over again, as different cultures invented and re-invented them across thousands of years.

Other titles coming to the PBS Documentaries Prime Video Channel in November:

THE MINUTE YOU WAKE UP DEAD in Select Theaters, On Digital, and On Demand This Friday, November 4

Starring Morgan Freeman (Million Dollar Baby), Jaimie Alexander (Thor), and Cole Hauser (“Yellowstone”), this sexy, riveting noir thriller will keep you guessing. After a shady small-town stockbroker begins dating a shy waitress, a shocking murder takes place — and one of them may be responsible. As word spreads that there’s money behind the killing, every criminal in town wants their share of the cash. One shocking plot twist follows another, and a bloody showdown leads to a mind-blowing finale.

It has been more than ten years since Giselle (Adams) and Robert (Dempsey) wed, but Giselle has grown disillusioned with life in the city, so they move their growing family to the sleepy suburban community of Monroeville in search of a more fairy tale life. Unfortunately, it isn’t the quick fix she had hoped for. Suburbia has a whole new set of rules and a local queen bee, Malvina Monroe (Rudolph), who makes Giselle feel more out of place than ever. Frustrated that her happily ever after hasn’t been so easy to find, she turns to the magic of Andalasia for help, accidentally transforming the entire town into a real-life fairy tale and placing her family’s future happiness in jeopardy. Now, Giselle is in a race against time to reverse the spell and determine what happily ever after truly means to her and her family.

LAMBORGHINI: THE MAN BEHIND THE LEGEND – In Select Theaters, On Demand, and Digital November 18

Featuring Oscar® winners Mira Sorvino and the screenwriter of Crash, this thrilling, high-speed biopic tells the story of genius auto inventor Ferruccio Lamborghini (Frank Grillo, “Kingdom,” “Boss Level”). All his life Ferruccio has dreamed of beating his longtime rival Enzo Ferrari (Gabriel Byrne, “War of the Worlds”) — and the upcoming Geneva grand prix could be his chance to blow past Ferrari for good. But can Ferruccio get his untested vehicle prepped for victory with the competition just months away? The race is on!

A new featurette is now available for Walt Disney Animation Studios’ action-packed adventure “Strange World,” revealing how the voice cast describes the upcoming feature: crazy, bizarre, adventurous, mysterious, thrilling, mind-blowing and, of course, strange. Featured stars include Jake Gyllenhaal, who lends his voice to Searcher Clade, a family man who finds himself out of his element on an unpredictable mission; Dennis Quaid, who voices Searcher’s larger-than-life explorer father, Jaeger; Jaboukie Young-White, who is the voice of Searcher’s 16-year-old, adventure-seeking son, Ethan; Gabrielle Union, who provides the voice of Meridian Clade, an accomplished pilot and Searcher’s partner in all things; and Lucy Liu, who voices Callisto Mal, Avalonia’s fearless leader who spearheads the exploration into the strange world. Opening in U.S. theaters this Nov. 23rd, the feature film introduces a legendary family of explorers, the Clades, as they attempt to navigate an uncharted, treacherous land alongside a motley crew that includes a mischievous blob, a three-legged dog and a slew of ravenous creatures. “Strange World” is helmed by Don Hall (Oscar®-winning “Big Hero 6,” “Raya and the Last Dragon”) and co-director/writer Qui Nguyen (co-writer “Raya and the Last Dragon”), and produced by Roy Conli (Oscar®-winning “Big Hero 6,” “Tangled”).

The Strange World Original Motion Picture Soundtrack, featuring score by composer Henry Jackman (“The Gray Man,” “Ron’s Gone Wrong,” “The Falcon and the Winter Soldier”), will be released in both digital and Dolby Atmos by Walt Disney Records on Nov. 23.

20th Century Studios’ original movie “Darby and the Dead,” a supernatural teen comedy about a high school student who moonlights as a spiritual messenger, will stream December 2, 2022, exclusively on Hulu in the U.S., Star+ in Latin America, and Disney+ under the Star banner in all other territories.

After suffering a near-death experience as a young girl, Darby Harper (Downs) gains the ability to see dead people. As a result, she becomes introverted and shut off from her high school peers and prefers to spend time counseling lonely spirits who have unfinished business on earth. But all that changes when Capri (Cravalho), the Queen Bee of the school’s most exclusive clique, unexpectedly dies in a freak hair straightening accident, resulting in the obvious cancellation of her upcoming “Sweet 17.” Capri, however, pleads with Darby from the other side to intervene and convince Capri’s friends to proceed with the party as planned. In order to appease the wrath of the undead diva, Darby must emerge from her self-imposed exile and reinvent herself — which along the way allows her to find new joy back in the land of the living.

“Darby and the Dead” stars Riele Downs (“Henry Danger”), Auli’i Cravalho (“Moana”), Chosen Jacobs (“IT”), Asher Angel (“Shazam!”), Wayne Knight (“Seinfeld”), with Derek Luke (“13 Reasons Why”) and Tony Danza (“Who’s the Boss?”), and is directed by Silas Howard (“Dickinson”). The screenplay is by Becca Greene (“Good Vibes”), based on a story by Wenonah Wilms (“Fem 101”), and the producers are Adam Saunders (“When We First Met”) and Eddie Rubin (“Blue Bayou”), with Michele Weisler (“The Kissing Booth”) and Mac Hendrickson serving as executive producers.

Three single women in their 40s, all stuck in the grind of their everyday lives, will check OUT of their comfort zones and check INTO The Groove Hotel, a magical resort on the beautiful island of the Dominican Republic – where the goal is to rediscover their youth, live joyously, and hopefully find love with men HALF. THEIR. AGE. As the saying goes, “you can’t fall in love with someone else until you fall in love with yourself!” At the Groove Hotel, these three women will have the opportunity to do both! Whether they find the perfect fling, friendship, true love, or something in between, this is their chance to take charge and break through the double standards older women face every day. And they’re going to have a lot of fun doing it! The show is hosted by Taye Diggs, who knows a thing or two about getting into the groove.

On the final patrol of their deployment, three soldiers are ambushed by heavily armed militants, leaving them wounded, isolated, and nearly out of ammunition. Upon receiving word of the attack, their commanding officer undertakes a daring, midnight-hour operation to free his men.

AVATAR: THE WAY OF WATER – NEW TRAILER AND POSTER- In Theaters December 16th

In celebration of the trailer and poster launch for “Avatar: The Way of Water,” a stunning light show of massive proportions featuring highlights from the film will be projected tonight over Niagara Falls.

With “Avatar: The Way of Water,”  the cinematic experience reaches new heights as Cameron transports audiences back to the magnificent world of Pandora in a spectacular and stirring action-packed adventure.

Set more than a decade after the events of the first film, “Avatar: The Way of Water” begins to tell the story of the Sully family (Jake, Neytiri, and their kids), the trouble that follows them, the lengths they go to keep each other safe, the battles they fight to stay alive,  and the tragedies they endure.

Starring Julianne Moore, “Sharper” unfolds within the secrets of New York City, from the penthouses of Fifth Avenue to the shadowy corners of Queens. Motivations are suspect and expectations are turned upside down when nothing is as it seems. “Sharper” is directed by Benjamin Caron and features a star-studded ensemble cast led by Moore, Sebastian Stan, Justice Smith, newcomer Briana Middleton and John Lithgow. The film is produced by Jessica Switch and Erik Feig of Picturestart along with Julianne Moore, Bart Freundlich, Brian Gatewood and Alessandro Tanaka, and written by Gatewood and Tanaka. Julia Hammer and Amy Herman serve as executive producers.

May your days be merry and bright! Check out these adorable Holiday Luminaries inspired by Nick Jr Holiday Bonanza, available now on DVD! Click the link to join the fun: https://bit.ly/HolidayBonanzaLuminaries