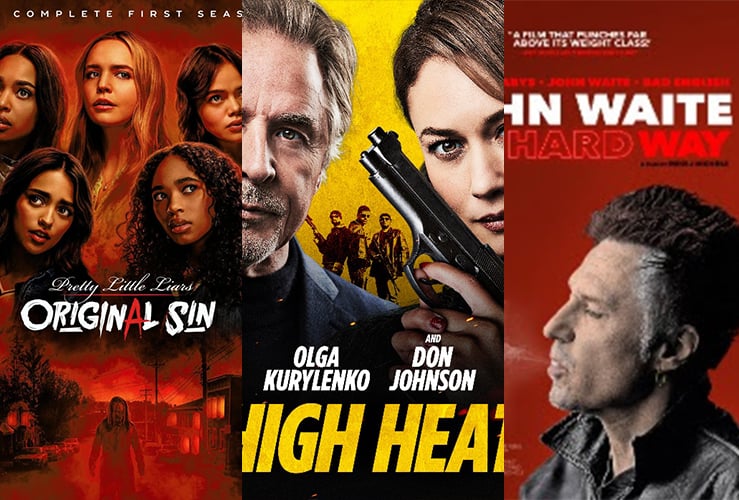 It may be a short week, but we still have a lot of updates in the entertainment world! Check out screenings and more announcements that came out this week.

Back in the Groove – Premieres Dec.5 On Hulu

Check out the trailer and key art for the upcoming Hulu Original unscripted series “Back in the Groove” with Host and Executive Producer Taye Diggs. The special four-night event kicks off Monday, December 5 with two episodes, on Hulu. Two all-new episodes available to stream daily through Thursday, December 8.

From pioneer rock-video band The Babys in the 1970s to his breakthrough as a solo artist and one of the first stars of the MTV era, to his time fronting supergroup Bad English, to touring with Ringo Starr, Waite recounts his struggles inside the commercialized world of the music business and his independent pursuits as a self-powered solo, live music artist. Producing more than a dozen Top 40 and rock hits throughout the 70s, 80s, and 90s, with total sales of approximately 10M copies, Waite is known for his iconic No. 1 hits including “Missing You” and “When I See You Smile.”

The Walt Disney Company is celebrating “Avatar Day” with the debut of the final trailer for “Avatar: The Way of Water,” James Cameron’s highly anticipated follow-up to his Academy Award®-winning “Avatar,” tonight during ESPN’s “Monday Night Football” game, which airs at 5:15PM PT/8:15PM ET. Fans counting the days to the film’s December 16th theatrical release can purchase tickets wherever tickets are sold.  Now fans, communities and organizations can arrange group bookings and theater buy-outs by visiting:  AvatarTheWayofWaterTickets.com

Celebration events are taking place all over the world, including Venice–where its famous canals were turned blue with a projection on the water and buildings, Sydney–where the iconic Bondi Beach Icebergs Pool was transformed into a giant blue birds’ eye view billboard for the film, and New York City’s famed Times Square, where at approximately 7PM EST, “Avatar: the Way of Water” will simultaneously light up 40 digital screens, immersing viewers in an anamorphic 3D, nearly 360 degree experience of Pandora’s breathtaking underwater world.

The following gala premieres for the film were announced:

Disney also revealed that Snapchat has created an augmented reality Lens that turns any Snapchatter into a Na’vi. Every Snapchatter will get a personalized experience. The Lens uses machine learning to transform in real-time their mouth, eyes, head shape, hair and skin – complete with blue-striped texture – as if they came straight from Pandora.

In addition, Amazon Alexa customers will have the opportunity to bring the sights and sounds of Pandora to their Echo devices as they go about their daily activities, making this the first Alexa themed experience for a film.  All customers have to say is, “Alexa, enable ‘Avatar’ theme” to get “Avatar” visuals and sounds whenever they set timers and alarms, ask for weather, say hello and more.  Alexa can also help you learn how to speak Na’vi. Just say, “Alexa, teach me Na’vi,” to get started.

And finally, beginning today in celebration of “Avatar Day,” the original 2009 “Avatar” is once again available to stream on Disney+.

With “Avatar: The Way of Water,”  the cinematic experience reaches new heights as Cameron transports audiences back to the magnificent world of Pandora in a spectacular and stirring action-packed adventure.

Set more than a decade after the events of the first film, “Avatar: The Way of Water” begins to tell the story of the Sully family (Jake, Neytiri, and their kids), the trouble that follows them, the lengths they go to keep each other safe, the battles they fight to stay alive,  and the tragedies they endure.

Starring Don Johnson (Knives Out) and Olga Kurylenko (Quantum of Solace). An ex-KGB operative turned chef, Ana (Kurylenko) is targeted by the local mafia in a hit on her new restaurant to collect on her husband’s (Johnson) debt. Now, Ana must rely upon her lethal skills as she goes on a deadly rampage to take out the entire crime syndicate one-by-one to save her restaurant and survive the night in this action-packed crime thriller.

From Damien Chazelle, BABYLON is an original epic set in 1920s Los Angeles led by Brad Pitt, Margot Robbie and Diego Calva, with an ensemble cast including Jovan Adepo, Li Jun Li and Jean Smart. A tale of outsized ambition and outrageous excess, it traces the rise and fall of multiple characters during an era of unbridled decadence and depravity in early Hollywood.

You’ll be on the edge of your seat with HBO Max’s new generation of liars in the secretive and suspenseful drama series that has captivated audiences everywhere as Warner Bros. Home Entertainment releases Pretty Little Liars: Original Sin: The Complete First Season on Digital today November 21, 2022, and on DVD February 28, 2023. Follow all 10, one-hour episodes from the series, plus almost one hour of bonus content that goes behind the scenes of the series for the ultimate fan! Pretty Little Liars: Original Sin: The Complete First Season is priced to own at $24.98 SRP for the DVD ($29.98 in Canada). The series is now available to own on Digital via purchase from digital retailers and to stream on HBO Max.

Twenty years ago, a series of tragic events almost ripped the blue-collar town of Millwood apart. Now, in the present day, a group of disparate teen girls — a brand-new set of Little Liars — find themselves tormented by an unknown Assailant and made to pay for the secret sin their parents committed two decades ago…as well as their own. In the dark, coming-of-age horror-tinged drama, we find ourselves miles away from Rosewood, but within the existing Pretty Little Liars universe — in a brand-new town, with a new generation of Little Liars.​

Pretty Little Liars: Original Sin is now available to own on Digital. Digital purchase allows consumers to instantly stream and download to watch anywhere and anytime on their favorite devices. Digital movies and TV shows are available from various digital retailers including Prime Video, Apple TV, Google Play, Vudu and others.