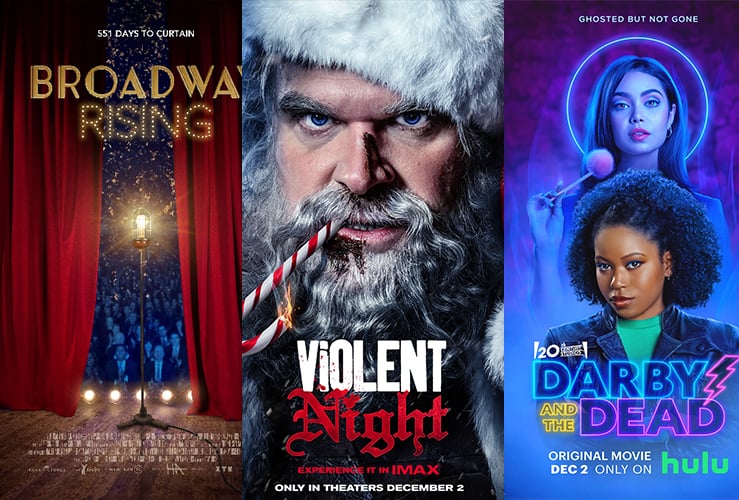 Holiday movies, events, and even more show announcements. Check out everything that’s happening in Entertainment and more movie screenings you don’t want to miss!

Tickets are now on sale for Walt Disney Animation Studios’ original action-packed adventure “Strange World.” Disney Animation has a rich tradition of bringing favorite films to the big screen in time for Thanksgiving—from 2016’s “Moana” and 2019’s “Frozen 2” to last year’s Oscar® winner “Encanto.” This year, moviegoers can see the epic movie “Strange World” exclusively in theaters starting Nov. 23. A new clip is now available featuring the Clade family’s three-legged, perpetually happy dog, Legend, who would do anything for his humans and a blue blobby creature they call Splat.

“Strange World” introduces a legendary family of explorers, the Clades, as they attempt to navigate an uncharted, treacherous land alongside a motley crew and a slew of ravenous creatures. The voice cast includes Jake Gyllenhaal as Searcher Clade, a family man who finds himself out of his element on an unpredictable mission; Dennis Quaid as Searcher’s larger-than-life explorer father, Jaeger; Jaboukie Young-White as Searcher’s 16-year-old son, Ethan, who longs for adventure; Gabrielle Union as Meridian Clade, an accomplished pilot and Searcher’s partner in all things; and Lucy Liu as Callisto Mal, Avalonia’s fearless leader who spearheads the exploration into the strange world. Helmed by director Don Hall and co-director/writer Qui Nguyen, and produced by Roy Conli, “Strange World” releases on Nov. 23, 2022.

When the Primm family moves to New York City, their young son Josh struggles to adapt to his new school and new friends. All of that changes when he discovers Lyle – a singing crocodile who loves baths, caviar and great music – living in the attic of his new home. The two become fast friends, but when Lyle’s existence is threatened by evil neighbor Mr. Grumps, the Primm’s must band together with Lyle’s charismatic owner, Hector P. Valenti, to show the world that family can come from the most unexpected places and there’s nothing wrong with a big singing crocodile with an even bigger personality.

For one week only, experience the anti-traditional holiday movie of the season with outrageous and unconventional, hyper-violent action with an outlandish depiction of a self-referencing Santa who is ready to kick ass in IMAX.

From 87North, the bare-knuckle producers of Nobody, John Wick, Atomic Blonde, Deadpool 2, Bullet Train and Fast & Furious Presents: Hobbs & Shaw comes a holiday action-comedy that says you should always bet on red.

The trailer and poster for 20th Century Studios’ “Darby and the Dead,” a supernatural teen comedy about a high school student who moonlights as a spiritual messenger, are both available now. The original movie will stream December 2, 2022, exclusively on Hulu in the U.S., Star+ in Latin America, and Disney+ under the Star banner in all other territories.

After suffering a near-death experience as a young girl, Darby Harper (Downs) gains the ability to see dead people. As a result, she becomes introverted and shut off from her high school peers and prefers to spend time counseling lonely spirits who have unfinished business on earth. But all that changes when Capri (Cravalho), the Queen Bee of the school’s most exclusive clique, unexpectedly dies in a freak hair straightening accident, resulting in the obvious cancellation of her upcoming “Sweet 17.” Capri, however, pleads with Darby from the other side to intervene and convince Capri’s friends to proceed with the party as planned. In order to appease the wrath of the undead diva, Darby must emerge from her self-imposed exile and reinvent herself — which along the way allows her to find new joy back in the land of the living. “Darby and the Dead” stars Riele Downs, Auli’i Cravalho, Chosen Jacobs, Asher Angel, Wayne Knight, with Derek Luke and Tony Danza, and is directed by Silas Howard. The screenplay is by Becca Greene, based on a story by Wenonah Wilms, and the producers are Adam Saunders and Eddie Rubin, with Michele Weisler and Mac Hendrickson serving as executive producers.

Directed by Emmy-nominated director Amy Rice (HBO’s By the People: The Election of Barack Obama, The Newsroom), the feature-length documentary chronicles the Broadway community’s harrowing and inspiring journey back to the stage following the COVID-19 shutdown on March 12, 2020.  Over 96,000 people lost their jobs when The Great White Way went dark decimating an entire ecosystem of businesses supporting the industry.  From actors to artisans, directors to doormen, producers to prop masters, not one aspect of the business was left untouched. But the show must go on! The film turns the spotlight on the community and highlights their stories of anxiety, doubt, perseverance and ultimately triumph on the long-awaited opening night, September 14, 2021.The film is produced by Tony Award®-winners Jesse Tyler Ferguson (Take Me Home, Modern Family) and Justin Mikita (Oklahoma!) under their A KID NAMED BECKETT Productions, Sam Bisbee of Park Pictures, Christopher Cowen of STATION 10, and Amy Rice, in association with World of Ha and XTR.

For the first time in more than a decade, DreamWorks Animation presents a new adventure in the Shrek universe as daring outlaw Puss in Boots discovers that his passion for peril and disregard for safety have taken their toll. Puss has burned through eight of his nine lives, though he lost count along the way. Getting those lives back will send Puss in Boots on his grandest quest yet.

Academy Award® nominee Antonio Banderas returns as the voice of the notorious PiB as he embarks on an epic journey into the Black Forest to find the mythical Wishing Star and restore his lost lives. But with only one life left, Puss will have to humble himself and ask for help from his former partner and nemesis: the captivating Kitty Softpaws (Oscar® nominee Salma Hayek Pinault).

In their quest, Puss and Kitty will be aided—against their better judgment—by a ratty, chatty, relentlessly cheerful mutt, Perrito (Harvey Guillén, What We Do in the Shadows). Together, our trio of heroes will have to stay one step ahead of Goldi (Oscar® nominee Florence Pugh, Black Widow) and the Three Bears Crime Family, Jack Horner (Emmy winner John Mulaney, Big Mouth) and terrifying bounty hunter, the big, bad Wolf (Wagner Moura, Narcos).

The long-awaited follow-up to the 2011 Academy Award®-nominated blockbuster, The Last Wish is directed by Joel Crawford and produced by Mark Swift, the creative team behind DreamWorks Animation’s smash, The Croods: A New Age. The film’s executive producer is Illumination founder and CEO Chris Meledandri.

The character of Puss in Boots first appeared in 2004’s Oscar®-nominated Shrek 2 and instantly became a global, scene-stealing sensation. Puss then co-starred in two other Shrek sequels and his solo film, as well as in multiple DreamWorks Animation videos and TV series. The Shrek and Puss in Boots films have collectively earned more than $3.5 billion worldwide.

All drugs and alcohol are illegal except on the day of the Binge. Several years after their first Binge, best friends Hags, Andrew, Sarah, and Kimi face the realities of young adulthood as the annual Binge Day is moved to Christmas Eve. Amidst the chaos, Hags plans a proposal to Sarah while Andrew deals with his rocky relationships with his family and his girlfriend Kimmi. Will they survive this holiday season?

BLACK WARRANT – In Theaters and VOD 12/9

A semi-retired special ops assassin and a DEA agent cross paths on separate missions to stop a cyber-terrorist organization that has built a dangerous machine threatening to attack the power grid and bring catastrophe to the world. Starring Cam Gigandet (The Magnificent Seven), Tom Berenger (Inception) and Jeff Fahey (Lost) in this gritty, action-packed thriller.

From acclaimed filmmaker Martin McDonagh (In Bruges, Three Billboards Outside Ebbing, Missouri) comes the masterful tragicomedy The Banshees of Inisherin. This immersive tale of friendship and folly has delighted cinemagoers and been celebrated by critics as “simply perfect” (Kevin Maher, The Times) and “sweepingly cinematic” (David Rooney, The Hollywood Reporter). The film is Certified-Fresh on Rotten Tomatoes™ and arrives on Digital December 13 and Blu-ray and DVD on December 20, with never-before-seen bonus content featuring actors Colin Farrell, Brendan Gleeson and director-writer Martin McDonagh.

The film made its World Premiere in September to critical acclaim at the Venice Film Festival, where it won the Best Screenplay Award for McDonagh and the Volpi Cup for Best Actor for Farrell.  It went on to release theatrically in October, earning the highest opening per screen average of the fall.

From director-writer Martin McDonagh (Three Billboards Outside Ebbing, Missouri) comes a unique film starring Colin Farrell and Brendan Gleeson. Although Pádraic (Farrell) and Colm (Gleeson) have been lifelong friends, they find themselves at an impasse when one abruptly ends their relationship, bringing alarming consequences for both of them.