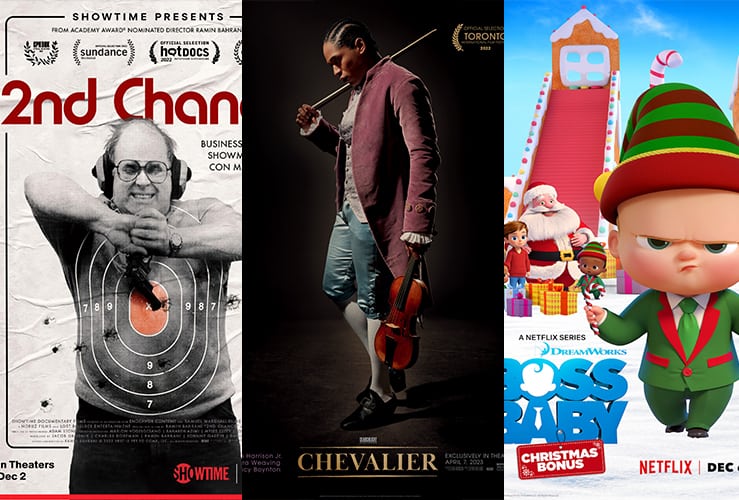 As we get closer to the holiday season and award season, we seem to be getting more movie and series announcements daily! Add in more screening opportunities and local experiences and events you wont want to miss.

In BORN FREE, filmmaker Paula James Martinez, travels across the US to understand what makes it the most dangerous and most expensive nation in the developed world to give birth in. From heartbreaking personal stories to harrowing facts and the words of experts both in the medical and legal fields, BORN FREE shines a light on the true cost of giving birth in the US.   Featured in the documentary are maternal health advocates including Christy Turlington, Chanel Porchia-Albert, Charles Johnson, Senator Tammy Duckworth, Senator Joe Kennedy and more who discuss the impact of current medical system standards and ultimate failure for those who experience traumatic pregnancies.  Shot with an all-female crew, the documentary raises an important discussion to guide improvement in maternal health care and reincorporating traditional maternal support such as midwives and doulas that have proven effective in improving pregnancy and childbirth outcomes.   It was produced by Semi Retired Films and Digital Harvest Media.  More information: www.bornfreefilm.com.

CHRISTMAS IN PARADISE – In Theaters November 11, On Demand, Digital, Blu-ray and DVD November 15

Kelsey Grammer (“Frasier”), Elizabeth Hurley (Austin Powers franchise), and Billy Ray Cyrus (“Hannah Montana”) star in this charming tropical tale guaranteed to heat up your holidays. Three quirky sisters chase their estranged dad (Grammer) down to his beachside pad in the Caribbean and enjoy a little fun in the sun. But why did he disappear to the islands? Only Joanna (Hurley) knows for sure, and she’s sworn to secrecy! Love, laughter, and songs by Cyrus make this a Christmas to remember.

After leaving NYC for his rural hometown of Bad Axe, Michigan, at the start of the pandemic, Asian American filmmaker David Siev documents his family’s struggles to keep their restaurant afloat. As fears of the virus grow, deep generational scars dating back to Cambodia’s bloody “killing fields” come to the fore, straining the relationship between the family’s patriarch, Chun, and his daughter, Jaclyn. When the BLM movement takes center stage in America, the family uses its collective voice to speak out in their conservative community. What unfolds is a real-time portrait of 2020 through the lens of one multicultural family’s fight stay in business, stay involved, and stay alive.

SHOWTIME® and Bleecker Street jointly released a trailer and poster for 2ND CHANCE, directed by Oscar® Nominated filmmaker Ramin Bahrani (The White Tiger, 99 Homes, Chop Shop). 2ND CHANCE is an exploration of the life and legacy of Richard Davis, the charming yet brash inventor of the modern-day bulletproof vest who shot himself 192 times to prove his product worked. A hero to police and the military until tragedy brought him down, Davis offers an American story of guns, violence, lies and self-deception.

2ND CHANCE will open at the Village East by Angelika and Alamo Drafthouse Lower Manhattan in New York and the Alamo Drafthouse Downtown and AMC Burbank 16 in Los Angeles on December 2nd. It will expand to cities nationwide December 9th. The film will premiere on the SHOWTIME® Network in the Spring of 2023. The documentary shrewdly juxtaposes Davis’ actions with those of his righteous right-hand man, Aaron Westrick. Unwilling to passively present questionable truths, Bahrani instead lays bare the complexities of one man’s supposed virtue while speaking to the nature of power and impunity in America. The film made its world premiere at the 2022 Sundance Film Festival and has gone on to play at HotDocs, True False Film Festival, BAMCinemaFest and CPH:DOX, and will showcase at the upcoming DOC NYC. It has won awards at Miami Film Festival and most recently at the Chicago International Film Festival.

Showtime Networks Inc. (SNI), a wholly owned subsidiary of Paramount, owns and operates the premium service SHOWTIME®, which features critically acclaimed original series, provocative documentaries, box-office hit films, comedy and music specials and hard-hitting sports. SHOWTIME is available as a stand-alone streaming service across all major streaming devices and Showtime.com, as well as via cable, DBS, telco and streaming video providers. SNI also operates the premium services THE MOVIE CHANNEL™ and FLIX®, as well as on demand versions of all three brands. SNI markets and distributes sports and entertainment events for exhibition to subscribers on a pay-per-view basis through SHOWTIME PPV®. For more information, go to www.SHO.com.

that was founded in August 2014 by Andrew Karpen. The company has released more than 45 films and established itself as a trusted label and champion of original cinema, cumulating an impressive and lauded slate including Debra Granik’s Leave No Trace; Steven Soderbergh’s Logan Lucky; the Academy Award®-nominated Captain Fantastic; the hit thriller Eye in the Sky, and the Academy Award®-nominated Trumbo.

It’s Boss Baby’s first Christmas and though Tim wants to introduce him to all the holiday trappings and Templeton traditions, Boss Baby wants nothing to do with it. In a last ditch effort to get Boss in the spirit, Tim takes him to the mall on Christmas Eve to meet Santa but unfortunately, his plan backfires when Boss Baby gets mistaken for an elf and is accidentally sent to the North Pole.

All drugs and alcohol are illegal except on the day of the Binge. Several years after their first Binge, best friends Hags, Andrew, Sarah, and Kimi face the realities of young adulthood as the annual Binge Day is moved to Christmas Eve. Amidst the chaos, Hags plans a proposal to Sarah while Andrew deals with his rocky relationships with his family and his girlfriend Kimmi. Will they survive this holiday season?

THE LONELIEST BOY IN THE WORLD is billed as a modern fairytale—except with zombies. When the sheltered and unsocialized Oliver is tasked with making new friends after the sudden and devastating death of his mother, he decides that digging a few up (literally) might be his best bet. However, when he awakens the morning after his excavating escapades, he discovers that his newly acquired friends have mysteriously come to life overnight, launching them all into a series of misadventures as they try to keep their secret safe from neighbors, classmates and social workers alike.

Based on the incredible true story of composer Joseph Bologne, Chevalier de Saint-Georges. The illegitimate son of an African slave and a French plantation owner, Bologne (Kelvin Harrison Jr. in a tour de force performance) rises to improbable heights in French society as a celebrated violinist-composer and fencer, complete with an ill-fated love affair and a falling out with Marie Antoinette (Lucy Boynton) herself and her court.