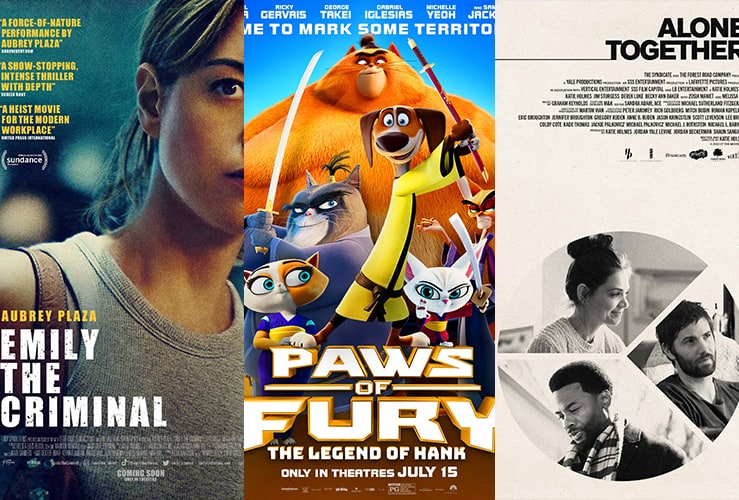 Have you caught all of the new movies and show updates? How about the screenings happening or Netflix Activity Truck Tour dates? We have it all and movie reviews for you to check out here!

Stay up to date on the movie release schedule too! We’ll see you at the show 🙂

Paramount Pictures brings Paramount and eOne’s DUNGEONS & DRAGONS: HONOR AMONG THIEVES to kick off the in-person return to San Diego Comic-Con with the FIRST Hall H panel of SDCC 2022!

The Hall H panel takes place on Thursday, July 21st at 12:00pm PT. Join our party and watch for exciting developments as cast and filmmakers appear on stage!

Dungeons & Dragons: Honor Among Thieves is in theaters March 3, 2023

During San Diego Comic-Con 2022, Paramount Pictures, in partnership with eOne, will bring the fantastical world of Dungeons & Dragons to life with their one-of-a-kind Tavern Experience. Patrons can visit the Tavern for a peek inside the world of Paramount and eOne’s new movie DUNGEONS & DRAGONS: HONOR AMONG THIEVES, in-theaters March 2023.

Inside, visitors will find a 20-minute, immersive experience for unique photo ops, exclusive takeaways, and a chance to sip on Dragon Brew while interacting with your favorite Dungeons & Dragons creatures and characters, plus a few surprise moments you won’t want to miss!

Boss Logic -created custom artwork will be printed as limited-edition takeaways for those who go through the Tavern Experience in San Diego!

Quincy’s Tavern led the recipe direction for the tavern’s Dragon Brew (alcoholic and non-alcoholic) that will be served to guests during the experience!

Located in the heart of the Gaslamp Quarter on the corner of Sixth Avenue and Island Avenue, the DUNGEONS & DRAGONS: HONOR AMONG THIEVES Tavern Experience will be open to the public at the following times:

To reserve your spot, keep a lookout on the film’s social channels for when the RSVP site launches soon. There will also be a stand-by line on a first-come, first-served basis. There is no charge for admission and the experience is open to the public for all ages.

Investigated with journalistic rigor by director Matt Tyrnauer, this documentary tells the searing and provocative story of the Victoria’s Secret brand and its longtime CEO, the larger-than-life, enigmatic billionaire Les Wexner. The underworld of fashion, the billionaire class, and Jeffrey Epstein are all revealed to be inextricably intertwined with the fall of this legendary brand in “Victoria’s Secret: Angels and Demons.”

PAWS OF FURY: THE LEGEND OF HANK | New Featurette – In Theaters July 15th

A hard-on-his-luck hound Hank (Michael Cera) finds himself in a town full of cats who need a hero to defend them from a ruthless villain’s (Ricky Gervais) evil plot to wipe their village off the map.  With help from a reluctant teacher (Samuel L. Jackson) to train him, our underdog must assume the role of town samurai and team up with the villagers to save the day. The only problem… cats hate dogs! Also starring Mel Brooks, George Takei, Aasif Mandvi, Gabriel Iglesias, Djimon Hounsou, Michelle Yeoh, Kylie Kuioka, and Cathy Shim, PAWS OF FURY: THE LEGEND OF HANK pounces into theatres July 15, 2022.

Granted unparalleled access, Academy Award®-nominated filmmaker Lawrence Kasdan takes viewers on an adventure behind the curtain of Industrial Light & Magic. Learn about the pioneers of modern filmmaking as we go on a journey to bring George Lucas’ vision to life. These filmmakers would then go on to inspire the entire industry of visual effects.

All six episodes of “Light & Magic” premiere on July 27, exclusively on Disney+.

PARADISE HIGHWAY in Theaters and On Demand July 29

Academy Award® winners Juliette Binoche and Morgan Freeman lead this riveting thriller set in the trucking industry and its seamy underbelly of human trafficking. To save the life of her brother (Frank Grillo), Sally (Binoche), a truck driver, reluctantly agrees to smuggle illicit cargo: a girl named Leila (Hala Finley). As Sally and Leila begin a danger-fraught journey across state lines, a dogged FBI operative (Freeman) sets out on their trail, determined to do whatever it takes to terminate a human-trafficking operation — and bring Sally and Leila to safety.

Going upstate for a short romantic getaway to escape the pandemic in New York City, food critic June’s (Katie Holmes) plans go wrong from the start. Arriving at the AirBnb in advance of her boyfriend, John (Derek Luke), she is shocked to discover it has been double-booked by recently single Charlie (Jim Sturgess). When John decides to stay in the city to take care of his parents, June has to settle in for the long haul as she realizes that the initial two weeks of the pandemic might just drag on a little bit longer than expected. As spring begins to unfold around them, June and Charlie make the most of the sudden break in their routines and develop an unexpected intimacy as they bond over their goals, ambitions and, of course, relationships.

From Apple Original Films comes the story of Sam Greenfield, the unluckiest person in the world, who when she stumbles into the never-before-seen Land of Luck, sets out on a quest to bring some good luck home for her best friend. But with humans not allowed, her only chance is teaming up with the magical creatures who live there to do it. “ Luck” is produced by Skydance Animation.

Continuing the tale from the hit Nickelodeon series, Raphael, Michelangelo, Leonardo and Donatello are back in action and up to their teenage antics in this comedic adventure that raises the stakes higher than ever before. The Turtles are put to the test when a mysterious stranger named Casey Jones arrives from the future to warn the mutant brothers of an impending invasion·of the most dangerous alien force in the galaxy – the Krang! Can the team rise up to become the heroes they are destined to be, or will their teenage foibles get the better of them? What unfolds is the most adventurous, emotional, and epic story ever told of the Teenage Mutant Ninja Turtles.

Emily (Aubrey Plaza) is saddled with student debt and locked out of the job market due to a minor criminal record. Desperate for income, she takes a shady gig as a “dummy shopper,” buying goods with stolen credit cards supplied by a handsome and charismatic middleman named Youcef (Theo Rossi). Faced with a series of dead-end job interviews, Emily soon finds herself seduced by the quick cash and illicit thrills of black-market capitalism, and increasingly interested in her mentor Youcef. Together, they hatch a plan to bring their business to the next level in Los Angeles.

While investigating a terroristic threat that goes viral online, Korean authorities discover that a suspect has recently boarded an international flight bound for the United States. When a healthy passenger on the same flight suddenly dies a gruesome death of unknown cause, panic erupts both in-flight and on the ground. With steadily decreasing fuel and international refusals to offer aid, the captain and crew will be forced to take unprecedented emergency measures in an attempt to save the lives of their passengers.

HONK FOR JESUS. SAVE YOUR SOUL – In Theaters September 2nd

Honk for Jesus. Save Your Soul. is a satirical comedy starring Regina Hall as Trinitie Childs – the proud first lady of a Southern Baptist megachurch, who together with her husband Pastor Lee-Curtis Childs (Sterling K. Brown), once served a congregation in the tens of thousands. But after a scandal forces their church to temporarily close, Trinitie and Lee-Curtis must reopen their church and rebuild their congregation to make the biggest comeback that commodified religion has ever seen.

Following a massive heart attack, Randal enlists his friends and fellow clerks Dante, Elias, Jay, and Silent Bob to make a movie immortalizing his life at the convenience store that started it all.