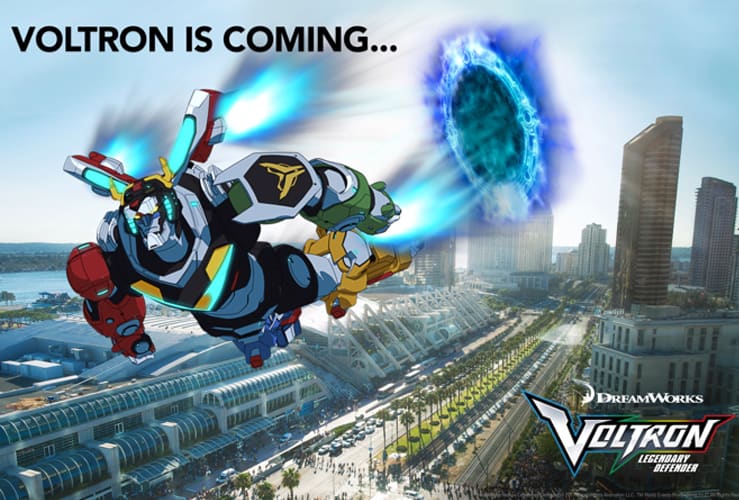 When DreamWorks Animation brought back Voltron in the new series Voltron Legendary Defender, we knew it was going to be a hit. Not only did it update the series we grew up with, but it introduced it to a new younger audience. We fell in love with the series in the first series, and now it’s coming back for a remarkable third season! You will be able to catch the first few episodes if you’re heading to San Diego Comic-Con later this month, and even grab yourself a Black Lion mask!

Fans will be treated to a first look into the exciting third season of the pop culture phenomenon Voltron Legendary Defender.Join executive producer Joaquim Dos Santos, co-executive producer Lauren Montgomery, Bex Taylor-Klaus (voice of Pidge), and Tyler Labine (voice of Hunk) in 6BCF for a special screening and a sneak peek at what’s to come for Team Voltron. The panel will be moderated by Kyle Anderson, Associate Editor of Nerdist.

Following the panel, DreamWorks is calling all Voltron cosplayers to meet Joaquim, Lauren, Bex and Tyler at FANDOM Fest at2:00 PM PST in the Petco Interactive Zone for a Voltron cosplay and fan meet up. Additional details to follow.

You can also beat the heat at the Petco Interactive Zone for a cool treat from the Voltron-themed food truck “Hunk’s Food Goo Replication Station” in Space M. Just like the Paladins of Voltron, fans can try every Altean’s favorite intergalactic snack: green food goo (or the earth-friendly version that tastes oddly similar to frozen yogurt). Served Thursday-Saturday from 11:00 AM – 6:00 PM and Sunday from 11:00 AM – 5:00 PM for free while supplies last.

On Friday morning, Joaquim, Lauren, Bex and Tyler will be signing an SDCC-exclusive poster created by the Voltron crew from10:30 AM – Noon in the Sails Pavilion at the Convention Center. Tickets will be made available in advance in the Autograph Area.

DETAILS ON PANELS/SCREENINGS AND ACTIVITIES (in chronological order):

Zarkon has been defeated and Shiro is nowhere to be found. Without a pilot for the black lion or the ability to form Voltron, the team must quickly devise a plan as the ascension of Prince Lotor pulls them into a perilous game of cat-and-mouse. Join executive producer Joaquim Dos Santos, co-executive producer Lauren Montgomery, Bex Taylor-Klaus and Tyler Labine as they debut the first episode of season three of the Netflix original series DreamWorks Voltron Legendary Defender. All attendees will receive an SDCC-exclusive poster created by the Voltron crew and the new Voltron chapter book “The Rise of Voltron” from Simon & Schuster.

Calling all Voltron cosplayers! Thursday is the day to break out your bayards and join Joaquim Dos Santos, Lauren Montgomery, Bex Taylor-Klaus and Tyler Labine at FANDOM Fest to celebrate Voltron with a cosplayer and fan meet up.

A DreamWorks Voltron Legendary Defender signing with Joaquim Dos Santos, Lauren Montgomery, Bex Taylor-Klaus and Tyler Labine will take place from 10:30 AM – 12:00 PM on Friday in the Autographing Area located in the Sails Pavilion of the San Diego Convention Center.

VOLTRON AROUND THE CON 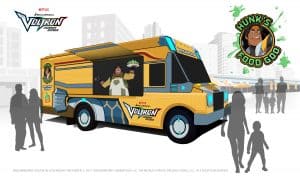 As Coran would say, “Ahoy, young paladins! I’ve whipped up a big batch of focusing food. After this snack, you’ll be forming Voltron six times a movement and twice on the astral conflux!”  Take a break from the crowds and have a cold and refreshing treat on us. DreamWorks Animation Television is bringing every paladin’s (least) favorite snack to San Diego: green food goo! From 11 AM – 6 PM Thursday to Saturday and 11 AM to 5 PM Sunday you’ll find Hunk’s Food Goo Replication Station serving Altea’s finest green goo while supplies last.