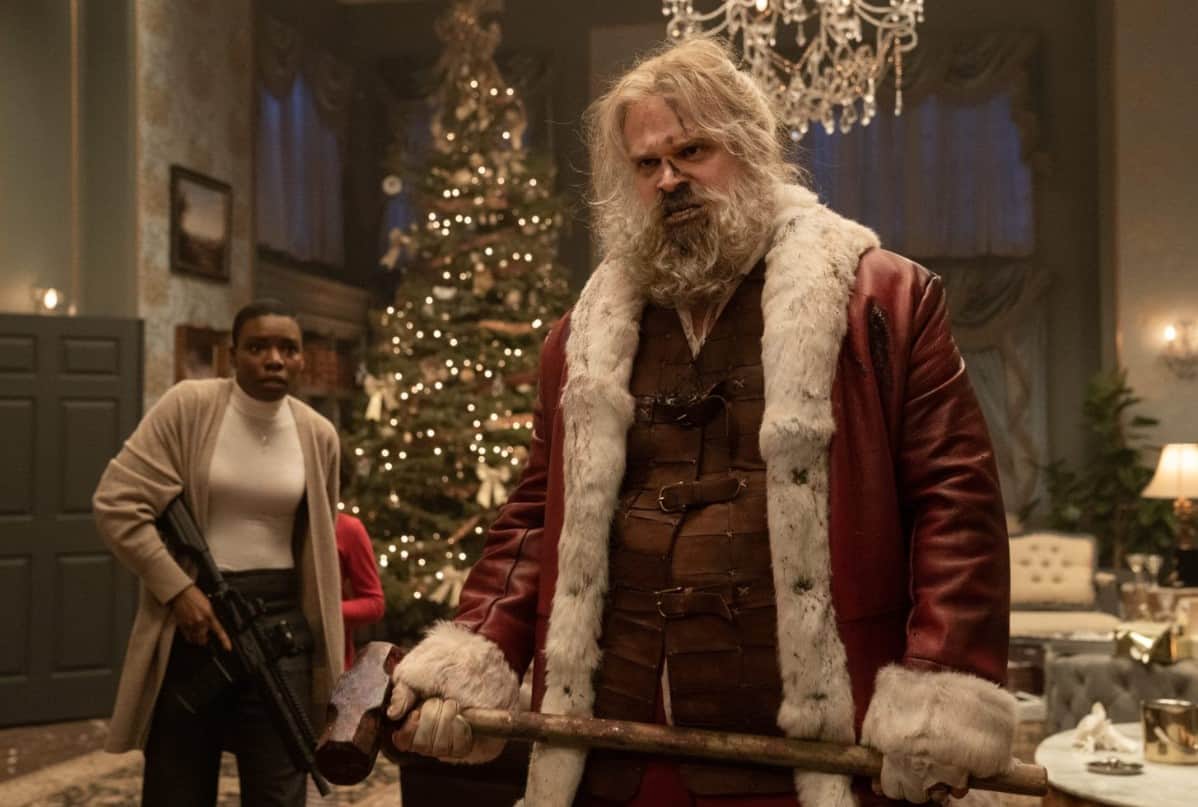 When it comes to Christmas movies, you may not think of action films. Yes, there’s always the debate that Die Hard and Lethal Weapon are Christmas movies, but just because the movie is set during the holiday season doesn’t mean it’s a Christmas movie. But if you add in Santa, and the action similar to Nobody and John Wick – you have the perfect combination for a holiday action film that audiences are going to love. Filled with gun fights, fighting and action sequences, and quite a lot of blood and gore – Violent Night still ends up warming your heart and doesn’t lose its hold on the holiday spirit.

Yes, Violent Night is going to steal your heart – and quite possible the place for your favorite holiday action film.

Violent Night follows the story of Santa Claus (David Harbour) as he’s out doing the yearly deliveries, somehow through his drunken stupor. But when he arrives at the family compound of the Lightstone family and decides to take a break – the house is breached by a group of thieves after the family fortune. Santa is now faced with a choice, escape and let the family face their fate, or help them and save Christmas.

Of course, Santa is the main character here, but almost equally important is the little girl in the story – Trudy. Still filled with the holiday spirit, she uses a “magical” walkie-talkie to talk to Santa. The movie makes a point to bring up that Trudy just watched Home Alone for the first time, and in some ways, the movie is a bit of a more twisted Home Alone storyline. Christmas, bad guys, fighting, and antics. Even the opening of the movie is shot similarly to the John Hughes holiday classic, introducing the characters in a rushed fashion past the camera and making sure they all are showing and giving their introduction as the movie opens. We even have the bumbling bad guys being out-witted by a kid, and some other elements that are fun to realize as the movie unfolds.

It should go without saying that Violent Night is not the family Christmas movie of the year. Filled with creative deaths, blood, violence, swearing, and a lot more – that is just the beginning of the list of reasons parents should consider not taking their kids to see Violent Night. The movie is rated R, which should be enough of a red flag for most parents, but if your children are still true believers in Santa and the holiday spirit, the discussion of his realness may be too much for too many to take.

With all of that being said, Violent Night is nothing short of a fun and entertaining movie. It takes on the darker side of holiday movies and packages them up perfectly in a gift for movie lovers. Harbour’s image of the strong and protective father type that he got from his most recent role in Stranger Things falls perfectly into the Santa Claus figure that calls back on his warrior days to protect a family and a little girl who needs him. He’s Santa, fighting with anything and everything he can to not only get home to his love but protect the meaning of Christmas from a lot of naughty bad guys.

Violent Night is in theaters everywhere this weekend. The movie definitely is going after the action movie audience but will surprise many others who head out to see it. There may be a few moments that are a bit more graphic than you expected but buckle in for a fast and fun ride on what may become one of your new favorite holiday films to watch each year.

To hell with “all is calm.”

From 87North, the bare-knuckle producers of Nobody, John Wick, Atomic Blonde, Deadpool 2 and Fast & Furious Presents: Hobbs & Shaw comes a coal-dark holiday thriller that says you should always bet on red.

When a team of mercenaries breaks into a wealthy family compound on Christmas Eve, taking everyone inside hostage, the team isn’t prepared for a surprise combatant: Santa Claus (David Harbour, Black Widow, Stranger Things series) is on the grounds, and he’s about to show why this Nick is no saint.