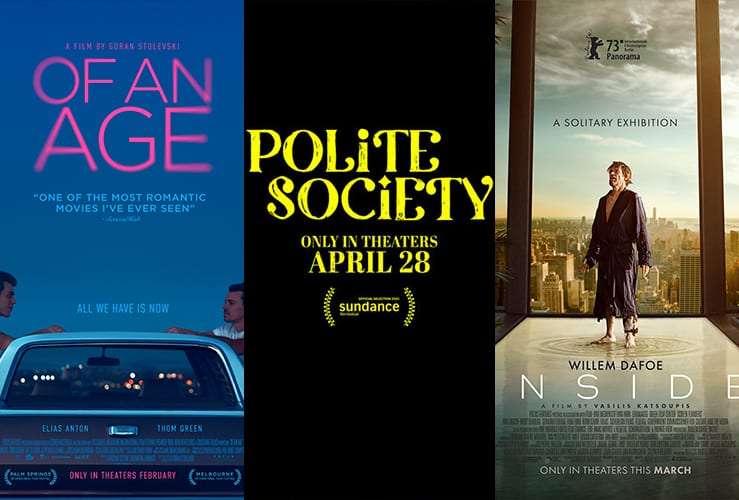 We’re getting a better look at what movies to expect this year from all of the studios and now we have the list of releases from Focus Features. A few titles still haven’t been given a release date, but there are a lot of great movies to look forward to this year.

OF AN AGE is set in the summer of 1999 as an 18-year-old Serbian born, Australian amateur ballroom dancer experiences an unexpected and intense 24-hour romance with a friend’s older brother.

INSIDE tells the story of Nemo, an art thief trapped in a New York penthouse after his heist doesn’t go as planned. Locked inside with nothing but priceless works of art, he must use all his cunning and invention to survive.

Woody Harrelson, Kaitlin Olson, Ernie Hudson, Cheech Marin, Madison Tevlin, Joshua Felder, Kevin Iannucci, Ashton Gunning, Matthew Von Der Ahe, Tom Sinclair, James Day Keith, Alex Hintz, Casey Metcalfe, Bradley Edens
Story: Woody Harrelson stars in the hilarious and heartwarming story of a former minor-league basketball coach who, after a series of missteps, is ordered by the court to manage a team of players with intellectual disabilities. He soon realizes that despite his doubts, together, this team can go further than they ever imagined.

A THOUSAND AND ONE – Theatrical Nationwide Release March 31st

A THOUSAND AND ONE follows unapologetic and free-spirited Inez (Teyana Taylor), who kidnaps six-year-old Terry from the foster care system. Holding onto their secret and each other, mother and son set out to reclaim their sense of home, identity, and stability, in a rapidly changing New York City.

A merry mash up of sisterly affection, parental disappointment and bold action, POLITE SOCIETY follows martial artist-in-training Ria Khan who believes she must save her older sister Lena from her impending marriage. After enlisting the help of her friends, Ria attempts to pull off the most ambitious of all wedding heists in the name of independence and sisterhood.

BOOK CLUB: THE NEXT CHAPTER – Theatrical Nationwide Release May 12th

The highly anticipated sequel follows our four best friends as they take their book club to Italy for the fun girls trip they never had. When things go off the rails and secrets are revealed, their relaxing vacation turns into a once-in-a-lifetime cross-country adventure.

Based on Characters Created By: Bill Holderman & Erin Simms

ASTEROID CITY takes place in a fictional American desert town circa 1955. Synopsis: The itinerary of a Junior Stargazer/Space Cadet convention (organized to bring together students and parents from across the country for fellowship and scholarly competition) is spectacularly disrupted by world-changing events.