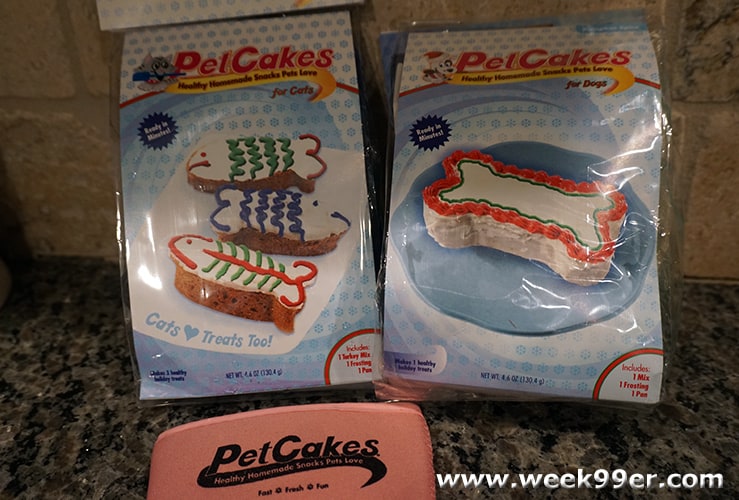 The holiday season is full of snacks and treats, and we’re often fighting a battle to keep our four legged friends out of the desserts. Part of the reason is we don’t want to share (of course) but also, most are filled with ingredients that aren’t good for them. We try to focus on getting them snacks and treats that are not only good for them, but filled with things they can have. 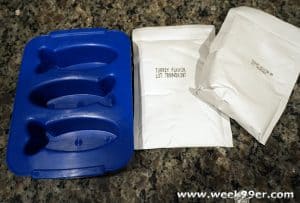 This year, our pets are getting an extra special treat with their own baked cakes from PetCakes. We found them on a dog blog and wanted to try them. We were sent a set for both cats and dogs, and inside is what you need to bake your pets their own treats. Don’t worry – you don’t need to be a master baker to make PetCakes, you just need a couple of ingredients and a microwave. 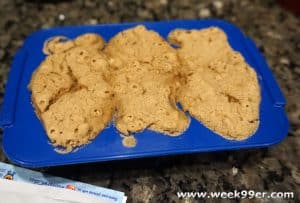 We thought we’d try the cat PetCakes with our cats and while our dinner was making I made their own cakes. Inside the package I found the microwave safe fish cake mold, the turkey cake mix and a frosting mix. To make the cake it was as easy as mixing together the turkey cake mix with water – you can add in canned chicken if you want as well, we skipped that step! The mix actually made more than enough for 3 molds and you can make a second batch if you have extra. Like most cake pans, we’d suggest only filling the fish pans 2/3rd full so it has room to expand. Otherwise you’re cakes may not look too pretty when they come out (like ours did!) Then it’s as easy as microwaving your PetCakes! 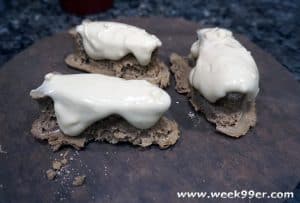 After cooling your PetCakes for at least 20 minutes, we mixed the frosting up and poured it over our cakes. They weren’t exactly pretty but the cats don’t care. Once the frosting was set it was time to give it the cats and see how they would do with it. The cats loved the yogurt based frosting, but were unsure about the cakes over all. We left them with the cakes for a while and they enjoyed them after some time. 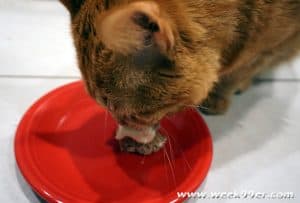 So, besides being able to make cat treats on demand, we loved that PetCakes were so easy to make. Inside each mix are organic ingredients that aren’t filled with fillers and other things like wheat and corn. With the addition of protein and other ingredients that drive the cats wild – these were a great hit in our house! We like that we can get them at the store near us, and that we can make them their own cakes and treats whenever we want.

Find PetCakes at a store near you!

Happy Holidays from the 99er Family to Yours

Socks They Will Actually Want for Presents

Stay Styled on the Go with Glister

Celebrate Those Important Moments with The Anniversary Clock