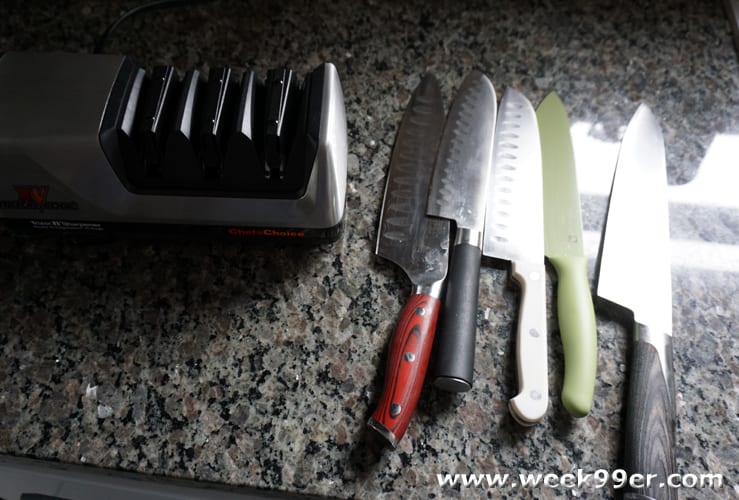 ﻿If you ask nearly any chef or quality cook what the most important kitchen tools are, one of those mentioned will be knives. Knives are essential to properly preparing meals, unless you eat out of a box. However, there is a vast difference in the quality between different knives you may use in the kitchen. Choosing the best knives becomes important.

There are three keys for choosing the best kitchen knives: Type, cutting ability, and durability.

The type of knife used is of importance. A boning knife is totally inadequate to use to peel potatoes, and a chef’s knife isn’t a great choice for cutting a filet off a fish. Different styles of knife have different strengths and weaknesses. Paring knives do a great job of peeling fruit and vegetables, for instance, because the blade is relatively short but stout and strong. If you have a good idea of which is the best knife for a task, you have an advantage. It is also far less dangerous. A lot of accidents with knives occur because the wrong knife is being used.

Using a knife that is dull to cut meat is about as useful as using a putty knife to screw in a light bulb. It is also far more dangerous. A dull knife easily slips off the item being cut, and since more pressure is generally being used, cuts are a common result.

What’s more, a dull knife has a jagged edge, so the cuts take longer to heal, and nearly always leave scars. Many people might not think of a sharp knife as being safer than a dull one, but it really is as long as people are careful with its use, as they always should be with a knife.

Initial sharpness isn’t the important part, though. When you buy even the worst quality kitchen knives, you can be fairly well assured that they will be sharp at the time of purchase. Otherwise, the knife manufacturer won’t be in business for long. However, all knives will gradually get dull. That is even true of the ‘miracle knives’ that are advertised as sharp enough to cut through a nail and still cut through a tomato.

Aside from the fact that it is elusive why anyone would want to use a kitchen knife to cut through a nail, much less to immediately try cutting a tomato, the fact is that all knives will gradually get dull. A good knife, though, can be sharpened. When properly sharpened, usually with a sharpening stone and a steel, it will also keep the edge for some time. This is to say that it will remain sharp without having to sharpen it again very soon, over and over.

For this reason, serrated edged knives are not a great choice except for cutting bread and steak. The reason for the former is that it takes quite awhile, if properly used, for bread to dull the knife. The reason for the latter is that steak knives tend to be cheap, and when they are dull, they can be discarded and replaced.

Unfortunately, just looking at a knife won’t necessarily tell you how easy it is to sharpen it. Relying on brand names and feedback from other people, or trying it yourself, is the best way to figure out how well a knife sharpens and holds an edge.

This is related to cutting ability, but not exclusive to it. A durable blade will generally hold an edge well. However, if the handle is cheap plastic, it may be apt to break easily too. On the other hand, a great handle doesn’t make a great knife. Use your judgment to find a balance between the two. You want to choose a knife that will last awhile, not just for a short time, or which causes you more effort than the knife is worth.

The mention of worth brings up the question of cost, which was purposely not previously mentioned. Choosing a good quality knife for the purpose you want to use it for doesn’t necessarily mean getting the most expensive knife available. Usually it also won’t be the cheapest, but good quality knives can come at a wide range of costs.

It is incorrect to assume that the expense of a knife with how how good the knife is. Though it wasn’t included in the three main things to look for when choosing a kitchen knife, this is an important tip to be aware of. Spending a lot of money on a knife that dulls quickly, won’t hold an edge, or that breaks, will just leave you frustrated and poorer.

Considering the type, cutting ability, and durability of the kitchen knife will go a long way toward helping you choose good knifes. Best of all, since they will last, they are more valuable than cheap knives you may use for a time, and then throw away. Since you also aren’t looking for the most expensive knives the store sells, you are well on your way to having an excellent set of knives that you may be able to use for many years or longer.