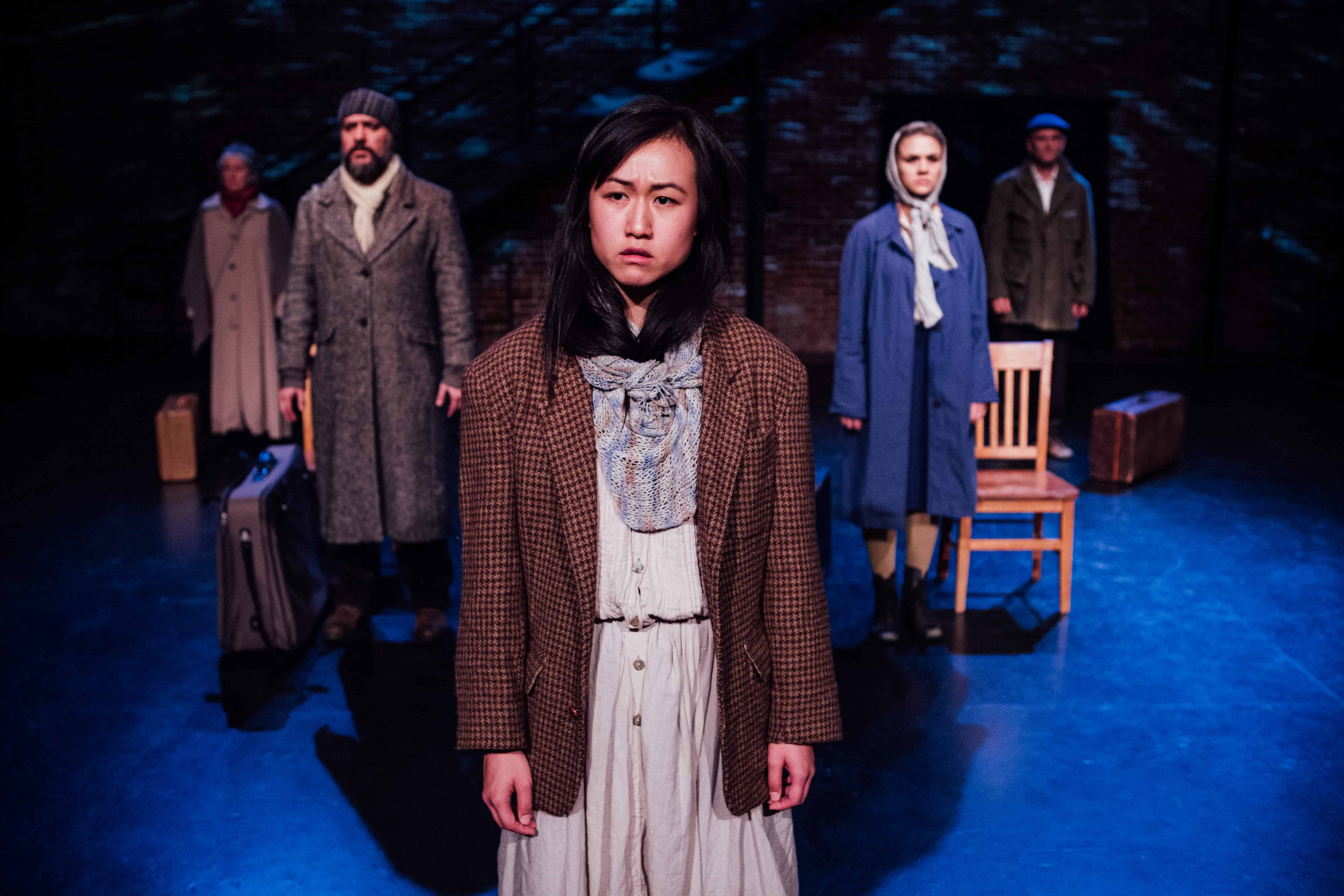 Broadway in Detroit announced today that it will present The New Colossus at The Music Hall, February 14-16, 2020, a new play written by The Actors’ Gang ensemble and The Actors’ Gang Artistic Director Tim Robbins who also directed the piece.

Tickets for The New Colossus start at $35 and go on sale Sunday, Oct. 27. Tickets can be purchased online at www.broadwayindetroit.com or www.ticketmaster.com, and by phone at 800-982-2787. Starting Monday, Oct. 28, tickets may also be purchased at The Music Hall and Fisher Theatre box offices.

In The New Colossus, The Actors’ Gang members tell their ancestors’ stories, their struggles and their journeys from oppression to freedom. The playcelebrates the courage and great character of the refugees who came to this country throughout the last 300 years. The ensemble of twelve reflects the great diversity that has defined who we are as a nation; The New Colossus is a celebration of our diversity.

Set somewhere between the 19th century and now, the play tells the story of forced migration and the constant struggle for survival and dignity in an uncertain and hostile environment. The members of the acting company are from different parts of the world; they tell their stories, each in a different language, and each in different dress.  Actors from Iran, Turkey, Malaysia, Germany, Vietnam, Louisiana, Mexico, Finland, Hungary, Soviet Union and Austria will be in the Detroit company.

Director Tim Robbins said, “I live in Los Angeles, where one can only be struck by the contributions made to our city by immigrants and people who came here as refugees. The Actors’ Gang felt compelled to respond to the government’s anti-refugee and anti-immigration policies –- and to tell a story that draws attention to the true nature of people that live in this country. Save for the Indigenous, all of our families came here as refugees, immigrants or were brought here against their will.”

“The characters in the piece all seem different, from different parts of the world, travelling at different times – but the stories are remarkably the same: the common experience of all refugees is that they are fleeing some kind of oppression and moving toward safety and hopefully, freedom. Our hope is that we will be able to illuminate the courage, fortitude and humor of the refugees that have defined this land and, in doing so, discover the similarities that exist between our ancestors and those who are currently struggling for dignity and freedom today.”

The New Colossus shares a title with the sonnet written by poet Emma Lazarus in 1883 for an exhibit to raise funds for the pedestal for the Statue of Liberty, which opened in 1886. Even though the Statue of Liberty was not conceived as a symbol of immigration, Lazarus’ “The New Colossus” reinvented the statue’s purpose, turning Liberty into a welcoming mother, a symbol of hope to the outcasts and oppressed of the world.

Give me your tired, your poor,

The wretched refuse of your teeming shore.

Send these, the homeless, tempest-tost to me,

I lift my lamp beside the golden door!

At the end of each performance the actors will engage the audience and ask them to share either their experience of immigration or their family’s experience.

The New Colossus has its beginnings in The Actors’ Gang 2017 Refugee Project Workshop Production, in which actors told true, personal stories about their ancestors –- where they came from, why they had to leave, and where they arrived and settled.

About The Actors’ Gang

Over the past 36 years, The Actors’ Gang has produced over 200 plays in Los Angeles, in forty-five US states, and on five continents. The company was founded in 1981 by a group of young artists looking to build a theatre that would present relevant and vibrantly entertaining plays. Guided by Founding Artistic Director, Tim Robbins, the company provides a supportive environment for a diverse ensemble of artists and the development of their groundbreaking work.

Over the last thirty years The Actors’ Gang has toured the U.S. in forty-five states and on five continents, performing across the world from London to Milan, Bucharest, Athens, Madrid, Barcelona, Bogota, Beijing, Shanghai, Hong Kong, Melbourne and Buenos Aires.

With their productions, education and outreach programs and tours they strive to strengthen communities in a way that only the medium of theater can. They produce plays that contribute to the ongoing dialogue about our society and culture, while never forgetting that theaters primary purpose is to entertain.

“The New Colossus” by Emma Lazarus

With conquering limbs astride from land to land;

Here at our sea-washed, sunset gates shall stand

A mighty woman with a torch, whose flame

Is the imprisoned lightning, and her name

Mother of Exiles. From her beacon-hand

With silent lips. “Give me your tired, your poor,

The wretched refuse of your teeming shore.

Send these, the homeless, tempest-tost to me,

I lift my lamp beside the golden door!”

For the past 36 years, Tim Robbins has served as Artistic Director for The Actors’ Gang, a theater company formed in 1982 that has over 150 productions and more than 100 awards to their credit. Past productions with The Actors’ Gang include: As Writer/Director – Harlequino On to Freedom (2017), Break the Whip (2010-11), Embedded (2003-4), Mayhem, the Invasion (1992), Carnage, A Comedy (1988-89), Violence, The Misadventures of Spike Spangle Farmer (1987) and Alagazam (1986). As Director –A Midsummer Night’s Dream (2012-16), Orwells’ 1984 (2006-16), Mephisto (2001), The Good Woman of Setzuan (1991), Methusalem, the Eternal Bourgeois (1985), A Midsummer Night’s Dream (1984), Ubu the King (1982); In addition to producing live theater throughout the year, The Actors’ Gang provides arts education to thousands of Elementary, Middle and High School students working in 12 LA USD schools and in underserved communities in the L.A. area. Since 2006, The Actors’ Gang’s groundbreaking Prison Project provides theatrical workshops to incarcerated men and women in 11 California prisons. In 2014, Robbins and Prison Project director Sabra Williams were instrumental in reinstating 6 million dollars into the California State budget for Arts in Corrections.

Performance times for The New Colossus appearing February 14-16, 2020 at The Music Hall, located at 350 Madison Ave. in Detroit are:

Tickets for The New Colossus start at $35 (includes facility fee) and will go on sale Sunday, Oct. 27.  Tickets can be purchased online at www.broadwayindetroit.com or www.ticketmaster.com, and by phone at 800-982-2787.  Starting Monday, Oct. 28 tickets may also be purchased at The Music Hall and Fisher Theatre box offices. For group sales (10 or more) please call 313-871-1132 or email groups@broadwayindetroit.com.  Performance schedule, prices and cast are subject to change without notice.