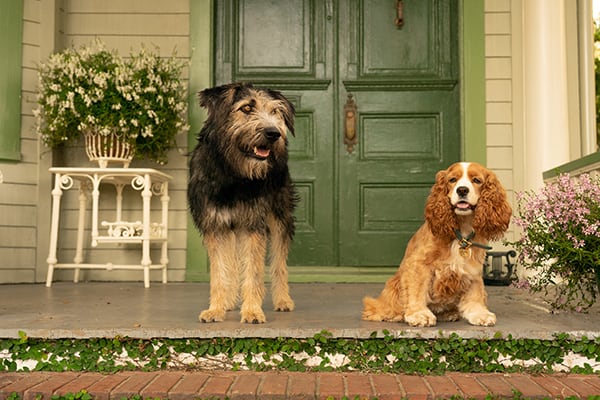 We’re in the age of Live Action Remakes and in the past year, there have a been a few that we wish Disney would have left alone (we’re looking at you Aladdin and The Lion King). But with the launch of Disney+, we’re going to see some of the other movie favorites coming to the screen that fans are going to question. And the latest in this trend is actually Lady and the Tramp, remaking the 1955 animated classic.

While we were first hesitant about the remake, we’re happy to say that the movie exceeded our expectations. Not only did they take the classic story and bring it to the screen again, but they took some of the elements that were problematic and changed them for a new generation.

Diversity Shown Throughout the Movie

In the live action version, the cast now reflects more of what our society is – diverse and inclusive. Not only does this give the movie a more realistic look at what life is like now (even though this is a period piece) but it gives kids the ability to see themselves in the story. With a more diverse cast, children and other viewers can see themselves in different parts of society and history and relate to the story more.

As much as we love the original film, it has it’s problems. Specifically the scene with the cat and Lady. While the cats mock Lady and destroy they house they sing a racially insensitive song “We Are Siamese” with caricature style features on them leading to the heavy racist overtones.

In the new version, we have cats that destroy the house with Lady looking on singing a more general song. The cats are animated (and a bit creepily actually) and don’t look like a specific breed or features that can be misconstrued. The song is more about the cats disliking dogs – which is another trope but one that is much safer and less offensive. The most offensive part about the new version is how poorly these cats were animated compared to the actual dogs they used in the film.

The latest version of Lady and the Tramp follows the same story as the original, it has at its heart the message of pet adoption and animal advocacy. But this comes with some trigger warnings for pet lovers.

The new movie covers things like Tramp being abandoned by his owners, Lady’s mistreatment by Aunt Sarah – and her owners response to it, as well as the Dog Catcher’s treatment of the dogs. It shows in a someway shielded way, dogs being put down (nothing shows on screen). And it shows the plight of dogs who may be living on the street compared to those in a loving home.

While the movie does show some of the harder parts of the lives of the dogs in the movie, it does also show what can happen when they are brought into loving homes. It shows what happens for the pets when people stand up for them and will make you happy to see their own happy endings.

With all of that, keep in mind, that Lady and the Tramp is still a family film about dogs that talk (using technology similar to the Air Bud movies) and is one that kids will relate to. The movie has new lessons and a way of looking at the way animals are treated. We applaud the updates and the changes made in the story.

About Lady and the Tramp

In Disney+’s “Lady and the Tramp,” a timeless re-telling of the 1955 animated classic, a pampered house dog and a tough but lovable stray embark on an unexpected adventure and, despite their differences, grow closer and come to understand the value of home.