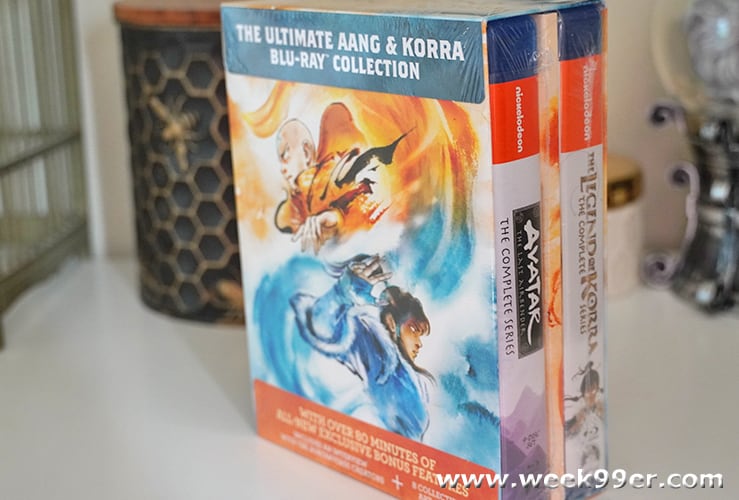 It’s perfect for a movie night, or to add to your collection now is the time to get your Aang and Kora Blu-Ray Collection. Loaded with the series we all loved, this series brings together custom artwork, scomplete series and every one of your favorite moments in one place.

Nickelodeon’s critically acclaimed, Emmy® Award-winning Avatar: The Last Airbender and The Legend of Korra animated series are back in a brand-new special collector’s edition: The Ultimate Aang and Korra Blu-rayTM Collection. The 2-series collection features new outer packaging designed with custom art of Aang and Korra in the Japanese Sumi art style, plus a brand-new bonus disc and eight collectible art cards. Included on the bonus disc are over 80 minutes of exclusive content: a brand-new feature exploring the Auditory Avatarverse with creators Mike DiMartino and Bryan Konietzko and a special recording with newly launched Avatar: Braving the Elements podcast hosts Janet Varney (voice of “Korra”) and Dante Basco (voice of “Zuko,” “General Iroh”).

TheUltimate Aang and Korra Blu-rayTM Collection features over an hour of all-new and exclusive bonus features including an Auditory Exploration with the Avatarverse Creators; a conversation with Janet Varney and Dante Bosco, hosts of the Avatar: Braving the Elements podcast; and 8 collectible art cards!
Experience the complete Avatar saga with Aang and Korra. From the discovery of Avatar Aang in the iceberg in Avatar: The Last Airbender to Korra’s heroic journey to set things right in Republic City through The Legend of Korra, relive all the epic air, earth, water and firebending in the ultimate Avatar collection.

The Legend of Korra:

The Legend of Korra:

About Nickelodeon’s Avatar: The Last Airbender

Nickelodeon’s Avatar: The Last Airbender emerged from its three-season run (61 episodes), from February 2005 to July 2008, as one of the most beloved animated properties in history. Honored with a Peabody Award and Primetime Emmy, along with multiple Annie Awards and GenesisAwards, the series follows the adventures of the main protagonist Aang and his friends, who must save the world by defeating Fire Lord Ozai and ending the destructive war with the Fire Nation.

In addition to the series’ success, the property has also been translated into several bestselling book series, which continue to roll out new original stories. The graphic novel series most recently spent two months on the New York Times Graphic Books Bestseller list in 2020, and the young adult novels have spent 22 cumulative weeks on the New York Times Young Adult Bestseller list and have shipped over a quarter million copies. The DVD and Blu-rays are also incredibly successful, with the “Avatar: The Last Airbender: The Complete Series” generating nearly $38MM in retail sales since its 2015 release.

About The Legend of Korra

The Legend of Korra launched in April 2012 on Nickelodeon and ran for four seasons (52 episodes). The series ranked as basic cable’s number-one kids’ show in its first season, drawing 3.8 million viewers per episode, the highest for an animated series that year. Created and executive produced by DiMartino and Konietzko, The Legend of Korra is translated in more than 25languages for Nickelodeon-branded channels internationally.

The property has translated into a successful ongoing graphic novel series written by TV series co-creator DiMartino. The first graphic novel storyline, Legend of Korra: Turf Wars, has captured various top 10 sales spots across children’s fiction, YA science fiction, and graphic novel categories since its debut in 2017. The epic story of The Legend of Korra, set in the world of Avatar: The Last Airbender 70 years later, follows the journey of Avatar Korra, a 17-year-old girl striving to live up to the legacy of her predecessor Avatar Aang, while using her mastery of all four elements to confront political and spiritual unrest in a modernizing world