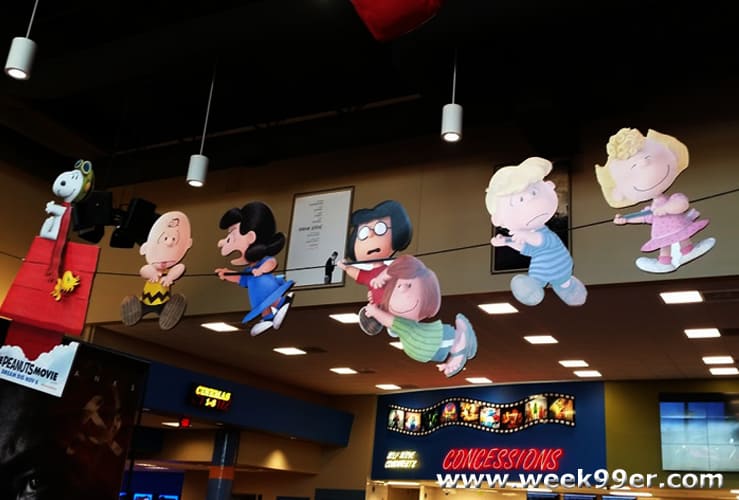 When they take some of the favorite characters from our childhood and put them in a movie, a lot of fans cringe. Will they do the characters justice? Or will they update it past recognition for die hard fans (just think what they did to our Ninja Turtles!). I was treated to a sneak peek preview of The Peanuts Movie, and held my breath when the opening credits started. I’m a huge Peanuts fan, that’s part of the reason I’m a Peanuts Ambassador. But knowing the movie was geared towards a new audience, and was going to be in 3D – I wasn’t sure if the movie would hold true to the shorter holiday movies and the characters we’ve all grown up with and loved.

Unlike the 20-30 minute movie shorts we’re use to from the Peanuts gang, The Peanuts Movie is actually 1 hour and 26 minutes long. You’re greeted with the familiar Peanuts characters of Charlie Brown, Sally, Lucy, Linus, Snoopy, Woodstock, Pig Pen, Marcy and Peppermint Patty. The movie cuts between comic style and 3D animation and even the animation is cut through with the earlier style of the comic drawings. You will notice that the character’s eyes remain to the comic style, and even their eye brows will go above their hats while they’re talking. Memories, dreams and daydreams are presented as drawn comics in thought bubbles and often black and white.

Can you expect to see Charlie Brown and his friends texting and talking on cell phones to one another to make it more relate-able to today’s kids? Not at all – instead you will see them answering traditional corded phones like they would in the comics and older specials. The movie stays true to the characters as they have been for the last 65 years, and continue to stay the characters that we all know and love.

The movie follows Charlie Brown through the school year as he falls head over heels for the Little Red Haired Girl. As a young boy, he’s struggling finding a way to get noticed by the Little Red Haired Girl, and find confidence in himself. No matter what he tries, he’s the same Charlie Brown we’re use to seeing – and still good at heart as he helps his sister out of a rough performance in the talent show and helps his friends out as well. While he battles to find himself, Snoopy takes the emotions Charlie Brown is feeling and writes his own version of the story including the battle with The Red Baron and his quest to save his love Fifi.

Peanuts fans will be happy with how the movie is done, and how the story is easy to relate to and stays true to the Peanuts comics. The Peanuts Movie is a great way to introduce younger children to the Peanuts franchise, and to the family friendly stories we all know and love them for having.

The Peanuts Movie is now playing at a theater near you, find great extras and movie times online!

Check out a preview of the movie below: