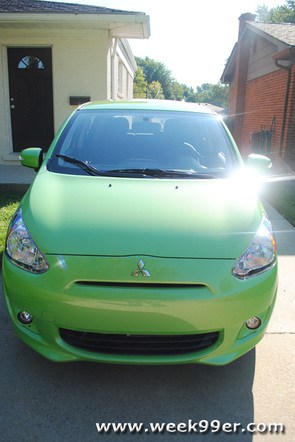 Over the past few years we’ve seen a rise in sub-compact cars on the market. They’re small, seat almost the same as a coup but boast higher gas mileage and several other features. That is exactly the area that the Mitsubishi Mirage fits into, it has a lot of different features, is loaded with safety features and gets great gas mileage. But I can’t be the only one asking who are these cars marketed for, right?

When a 2015 Mitsubishi Mirage was dropped off for me to review my first thought was “it’s adorable”. There is no way to get around that. The car looks like it’s right out of Disney’s Cars – and just needs the eyes to make the image complete. But my initial thought was that the car had to be marketed to college students or people looking to get their first car. I mean, it’s pretty little – the only other use I could think for it would be a commuter car. 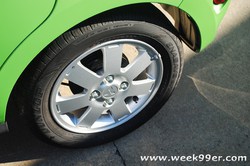 Besides the small overall size of the vehicle, you can see that it also has 14 inch tires. I honestly can’t say that I’ve ever seen them on a road ready vehicle – except maybe for spare tires. But for the size of the Mirage, you really don’t need much more.  Remember the car is a sub-compact, that means you will finally have a vehicle that fits inside one of those tiny compact spaces! After the trip we had this weekend, we could have used that for the parking ramp we were forced to park in. 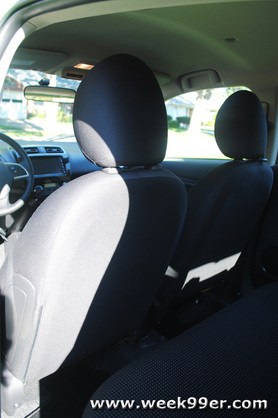 The smaller size of the car does not provide a lot of space inside. There were only a few inches between the back of the driver’s seat and the back bench seating. This would be fine for small children, but I personally don’t think many adults would be comfortable sitting in the back for very long.

In order for me to drive the Mirage, I had to have the driver’s seat all the way back. This would minimize the leg space in the back row on that side. Unfortunately, the car did not provide enough leg room for my boyfriend who is 6′-6″. It barely did for me at 5′-11″. So the Mirage is obviously designed for people of average height and a bit below. 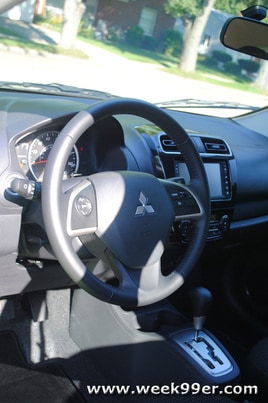 The Mirage starts at just $12,000 and the model I tested was fully loaded. Even with all of the features loaded in the car, the most it will cost you is slightly over $17,000. That makes it extremely affordable for a budget focused family. And the lower cost doesn’t meant they skimped on the typical features you’d expect to find in the car. The Mirage still has the standard features you’d expect, and it even has seven airbags including a driver’s knee airbag. The car also includes cruise control, climate control and power windows. So the smaller price point doesn’t necessarily mean you’re giving up some of the basic features you’re like to have in a car. 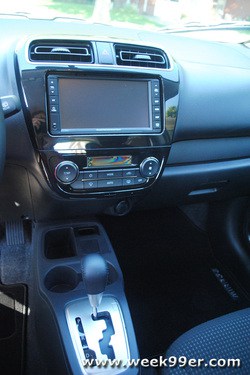 In the higher priced model you will also find a GPS system and mapping program. This is great if you’re on the go, or need the navigation feature. But in the Mirage it also has another feature that you can take or leave – I would rather leave. The GPS tracks you as you drive, not unlike Google Maps does. But while you’re driving it will also check the speed limit and compare it to what you’re driving. That being said, it will also tell you very loudly if you’re speeding… No, I’m not kidding! There is an audible response that will tell you “You are over the speed limit”. While this is probably great for beginning drivers, it is not always a good thing. Besides being distracting to the driver, a bit annoying and dare I say even jarring – it is not adjustable (or at least where I could find it). And if you’ve ever driven in Metro Detroit, if you’re not doing at least 5 over the speed limit, there is a chance someone will run you off the road. So while I knew I was speeding – I didn’t necessarily need it announced to me every five minutes. I have been assured that this is something that can be changed in the settings – but please remember you can only change things when the car is not in motion. So if this is a setting you prefer to not have going, be sure you turn it off before you start driving! 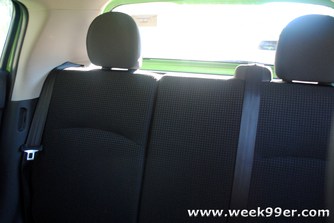 Despite being a sub-compact, the Mirage can seat up to five. The backseat even has connections for up to three car seats. I doubt three would fit back there safely with the overall size of the vehicle, but you could put two in with some space in between if you needed to. However, the small size of the car would not be the best place to put a lot of small noisy children. For me that be more distracting to the driver. 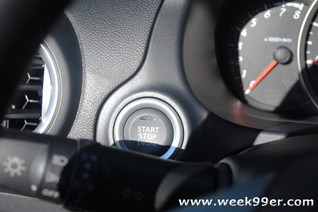 When I first got into the Mirage, it took me a minute to start it. I had a problem finding the push start button. Every car I have driven, since I received my license had the ignition switch in the same place. In the Mirage, the push start button is on the left hand side behind the turn signal. Every time I got into the Mirage to drive I had to reset my learned habit of turning on the car by reaching to the right. This was one of the things I wasn’t a huge fan of in the Mirage. The ignition switch placement apparently is for the more global market, since the Mirage is sold in Japan and Europe. Although this may be the reasoning behind having it placed where it is, there was an open spot on the lower portion of the wheel console where the ignition switch would normally be, so to me at least it doesn’t make sense where it is. Mirage enthusiasts claim that after some time, you don’t notice the difference when starting the car and it becomes habit. However, for me, I think this would almost be a deal breaker. 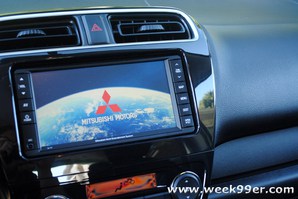 The Mirage is also a 3 Cylinder vehicle. I was shocked when I learned this – I don’t know if I knew they actually still built and sold 3 cylinders. I’m use to driving a 6 cylinder, so even going down to a 4 is often hard for me. But while driving the Mirage I found that for in town driving that the smaller was not a problem. It only became a problem when I was driving to work and tried to accelerate to get to the speed on the highway. The engine roared and raced up to 5000 rpm, to only make it up to 70 mph.

On my earlier work nights, I often get stuck in rush hour traffic. I took the quicker route home and dealt with the commuting traffic on surface streets rather than putting the Mirage on the highway again. As I idled between lights the engine would slow in cycling and physically lurch forward. And even in between that, you could hear the engine almost whining as you idled. It is not a quiet car by any means. 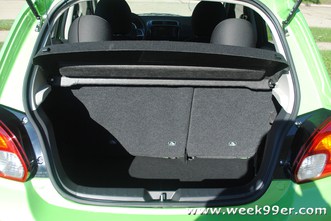 Due to it’s small size the Mirage doesn’t have a lot of storage space. It would hold a backpack, some groceries or even a small umbrella stroller. But it wont hold much more than that. If you’re planning on taking a longer trip in the Mirage, consider putting extra bags in the back seat! Yes, the Mirage is small on space, but compared to the SUVs and Sedans that we all love and have – but compared to other cars in its category it is considered roomie. The space inside the Mirage is comparable to a Honda Accord, however I still cannot imagine packing our family in this vehicle.

Since I am taller, I think I had some problems overall driving the Mirage. Even with the seat all the way back, on my commutes home from campus I’d get body aches. The cup holders were too far up under the center dash, the door arm rest was too low and there wasn’t an arm rest on the right side of the seat – or really anywhere to put my arms. It was not a pleasant vehicle for me to drive in, but that could just be a height issue. 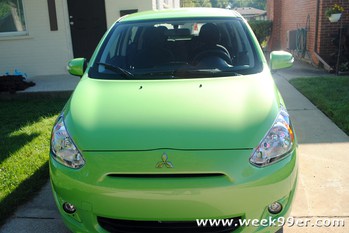 With all that being said, I know that I may not be the target market for the Mirage. The sub-compact vehicle actually does get up to 44 mph on the highway and 37 in the city. Besides a lower cost point up front, the savings in gas mileage would definitely save you some cash over the long run. The Mirage also comes with a 10 year, 100,000 mile warranty. So where ever it takes you, you will be covered.

So who is the target market for the Mirage? I’ve been told it’s budget savvy families and individuals. But I stand by my initial thought of college students, young drivers and commuters. With the safety features, the low price point and even the gas mileage – these are all key items for people who are looking for an affordable vehicle. Plus, what parent wouldn’t want a car telling their kids to slow down?