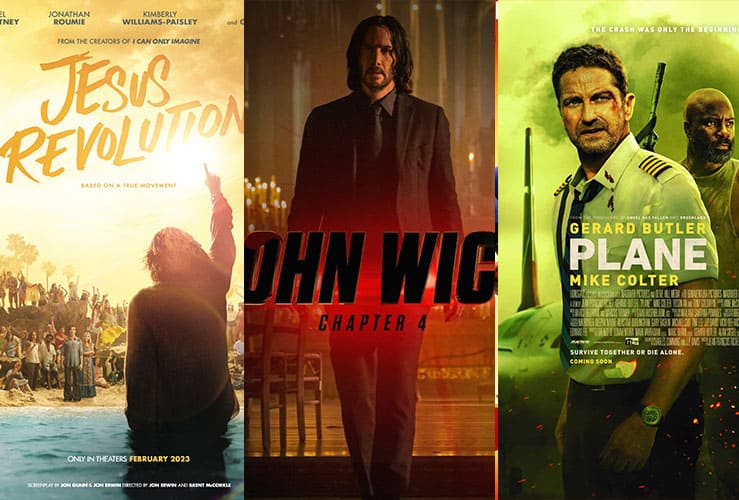 This year promises a lot of action and great movies coming to theaters, and Lionsgate has quite a movie line up for us already! At this point, these are the major titles that Lionsgate has announced for the year, but expect to see a lot of smaller and independent titles as the year progresses as well. We’re also hoping to see a release date for White Bird soon as well!

In the white-knuckle action movie PLANE, pilot Brodie Torrance (Gerard Butler) saves his passengers from a lightning strike by making a risky landing on a war-torn island – only to find that surviving the landing was just the beginning. When most of the passengers are taken hostage by dangerous rebels, the only person Torrance can count on for help is Louis Gaspare (Mike Colter), an accused murderer who was being transported by the FBI. In order to rescue the passengers, Torrance will need Gaspare’s help, and will learn there’s more to Gaspare than meets the eye.

In the 1970s, young Greg Laurie (Joel Courtney) is searching for all the right things in all the wrong places: until he meets Lonnie Frisbee (Jonathan Roumie), a charismatic hippie-street-preacher. Together with Pastor Chuck Smith (Kelsey Grammer), they open the doors of Smith’s languishing church to an unexpected revival of radical and newfound love, leading to what TIME Magazine dubbed a JESUS REVOLUTION.

John Wick (Keanu Reeves) uncovers a path to defeating the High Table.But before he can earn his freedom, Wick must face off against a new enemy with powerful alliances across the globe and forces that turn old friends into foes.

For over fifty years, Judy Blume’s classic and groundbreaking novel Are You There God? It’s Me, Margaret. has impacted generations with its timeless coming of age story, insightful humor, and candid exploration of life’s biggest questions. In Lionsgate’s big-screen adaptation, 11-year-old Margaret (Abby Ryder Fortson) is uprooted from her life in New York City for the suburbs of New Jersey, going through the messy and tumultuous throes of puberty with new friends in a new school. She relies on her mother, Barbara (Rachel McAdams), who is also struggling to adjust to life outside the big city, and her adoring grandmother, Sylvia (Kathy Bates), who isn’t happy they moved away and likes to remind them every chance she gets. The film also stars Benny Safdie (Licorice Pizza, Good Time) and is written for the screen and directed by Kelly Fremon Craig (The Edge of Seventeen), based on the book by Judy Blume, and produced by Gracie Films’ Academy Award® winner James L. Brooks (Best Picture, 1983 – Terms of Endearment), alongside Julie Ansell, Richard Sakai, Kelly Fremon Craig, Judy Blume, Amy Lorraine Brooks, Aldric La’auli Porter, and executive produced by Jonathan McCoy.

The hottest comic in America, Sebastian Maniscalco joins forces with legendary Italian-American and two-time Oscar® winner, Robert De Niro (Best Actor, Raging Bull, 1980), in the new comedy ABOUT MY FATHER. The film centers around Sebastian (Maniscalco) who is encouraged by his fiancée (Leslie Bibb) to bring his immigrant, hairdresser father, Salvo (De Niro), to a weekend get-together with her super-rich and exceedingly eccentric family (Kim Cattrall, Anders Holm, Brett Dier, David Rasche). The weekend develops into what can only be described as a culture clash, leaving Sebastian and Salvo to discover that the great thing about family is everything about family.

ABOUT MY FATHER is directed by Laura Terruso and written by Austen Earl & Sebastian Maniscalco.

Julian has struggled to belong ever since he was expelled from his former school for his treatment of Auggie Pullman. To transform his life, Julian’s grandmother finally reveals her own story of courage. During her youth in Nazi-occupied France, a boy shelters her from mortal danger. Together, they find first love in a stunning, magical world of their own creation, while the boy’s mother risks everything to keep her safe.

A new generation of stars join the world’s top action stars for an adrenaline-fueled adventure in The Expendables 4. Reuniting as the team of elite mercenaries, Jason Statham, Dolph Lundgren, Randy Couture, and Sylvester Stallone are joined for the first time by Curtis “50 Cent” Jackson, Megan Fox, Tony Jaa, Iko Iwais, Jacob Scipio, Levy Tran, and Andy Garcia. Armed with every weapon they can get their hands on and the skills to use them, The Expendables are the world’s last line of defense and the team that gets called when all other options are off the table. But new team members with new styles and tactics are going to give “new blood” a whole new meaning.

The Hunger Games: The Ballad of Songbird – November 17th

Years before he would become the tyrannical President of Panem, 18-year-old Coriolanus Snow is the last hope for his fading lineage, a once-proud family that has fallen from grace in the post-war Capitol.

With the 10th annual Hunger Games fast approaching, the young Snow is alarmed when he is assigned to mentor Lucy Gray Baird, the girl tribute from impoverished District 12. But after Lucy Gray commands all of Panem’s attention by defiantly singing during the reaping ceremony, Snow thinks he may be able to turn the odds in their favor. Uniting their instincts for showmanship and newfound political savvy, Snow and Lucy’s race against time will ultimately reveal who is a songbird, and who is a snake.

White Bird: A Wonder Story (No Date Yet)

Julian has struggled to belong ever since he was expelled from his former school for his treatment of Auggie Pullman. To transform his life, Julian’s grandmother finally reveals her own story of courage. During her youth in Nazi-occupied France, a boy shelters her from mortal danger. Together, they find first love in a stunning, magical world of their own creation, while the boy’s mother risks everything to keep her safe.