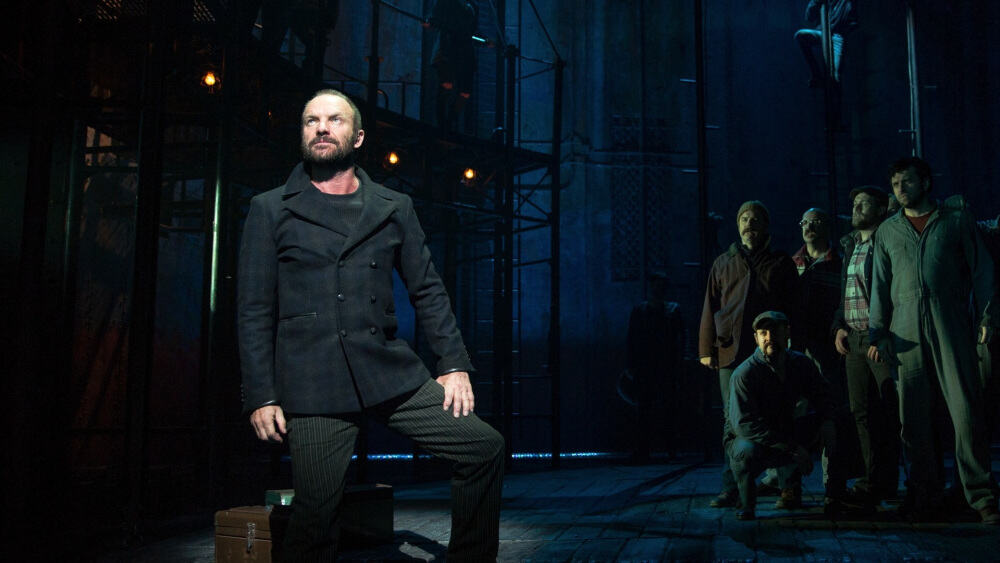 Sting’s acclaimed musical, THE LAST SHIP, starring and featuring original music and lyrics by multiple Grammy Award®-winner Sting, will make its premiere in Detroit at the Detroit Opera House, April 22-26, 2020, as part of an international Tour. THE LAST SHIP will also have engagements in Los Angeles at Center Theatre Group’s Ahmanson Theatre; San Francisco at SHN’s Golden Gate Theatre; Washington D.C. at the National Theatre; and in St. Paul, MN at the Ordway.

Sting will star as shipyard foreman, “Jackie White,”and will perform the role at every performance. Additional cities and tour casting will be announced at a later date.

Tickets for the Detroit engagement will go on sale November 29.  For more information on the production and a video sneak peek, please visit thelastshipmusical.co.uk.

THE LAST SHIP, inspired by Sting’s 1991 album “The Soul Cages” and his own childhood experiences, tells the story of a community amid the demise of the shipbuilding industry in Tyne and Wear, with the closure of the Swan Hunter shipyard.

When a sailor named Gideon Fletcher returns home after seventeen years at sea, tensions between past and future flare in both his family and his town. The local shipyard, around which the community has always revolved, is closing and no one knows what will come next, only that a half-built ship towers over the terraces. With the engine fired and pistons in motion, picket lines are drawn as foreman Jackie White (Sting) and his wife Peggy fight to hold their community together in the face of the gathering storm.

This personal, political and passionate musical from multiple Grammy Award®-winner Sting is an epic account of a family, a community and a great act of defiance. THE LAST SHIP features an original score with music and lyrics by Sting as well as a few of his best-loved songs; Island of Souls, All This Time and When We Dance.  It is the proud story of when the last ship sails.

The musical is directed by Lorne Campbell, the artistic director of Northern Stage, and has set design by the Tony Award-winning 59 Productions, the team behind the video design for the 2012 London Olympic Games.

THE LAST SHIP is produced by Karl Sydow.

“A ROUSING EVENING FULL OF HEART AND SONG” – The Guardian

“A THRILL TO WATCH” – The Globe and Mail

Sting was born Gordon Matthew Sumner on October 2, 1951 in Wallsend, North Tyneside, Tyne and Wear, England, the eldest of four children of Audrey (Cowell) and Ernest Matthew Sumner, an engineer and milkman.

He grew up in the turmoil of the ship-building industry and wanted to become a musician very early having developed a love for the bass guitar. He played in jazz/rock bands such as “The Last Exit” and other various outfits, including a Dixieland jazz group, and in 1977, he formed the rock trio, The Police with Stewart Copeland and Andy Summers.

In 1984, he went on to record solo albums, and has evolved into one of the most prolific songwriters and musicians in the world. Throughout his illustrious career, Sting has received 17 Grammy Awards®, two Brits, a Golden Globe, an Emmy, four Academy Award nominations, a Tony nomination and has sold close to 100 million albums from his combined work with The Police and as a solo artist. Following his critically-acclaimed album, 57th & 9th, his first rock/pop collection in over a decade, Sting and Jamaican musician, Shaggy released a collaborative, island-flavored album, entitled 44/876, that reflects the duo’s mutual love of Jamaica – its music, the spirit of its people and the vibrancy of its culture – and has spent over 20 weeks atop Billboard’s Reggae album chart and received the Grammy Award® for Best Reggae album.

Sting, managed by The Cherrytree Music Company, has appeared in over 15 films such as Quadrophenia (1979) and Bring on the Night (1984) and has published a memoir entitled Broken Music in 2003, which spent 13 weeks on The New York Times Best Sellers list. He has received honorary Doctorate of Music degrees from Northumbria University in October 1992, Berklee College of Music in May 1994, University of Newcastle upon Tyne in 2006 and from Brown University in 2018.

Sting recently released a new album, entitled My Songs, consisting of contemporary interpretations of his most celebrated hits. He is currently on tour in Europe with “My Songs” – a rollicking, dynamic show featuring the most beloved songs written throughout his prolific career.

Next year Sting will also headline a Las Vegas residency, “My Songs,” set to open at The Colosseum at Caesars Palace on May 22, 2020.The show will present a compendium of Sting’ssongs with dynamic, visual references to some of his most iconic videos and inspirations.  For more information, please visit: www.sting.com.