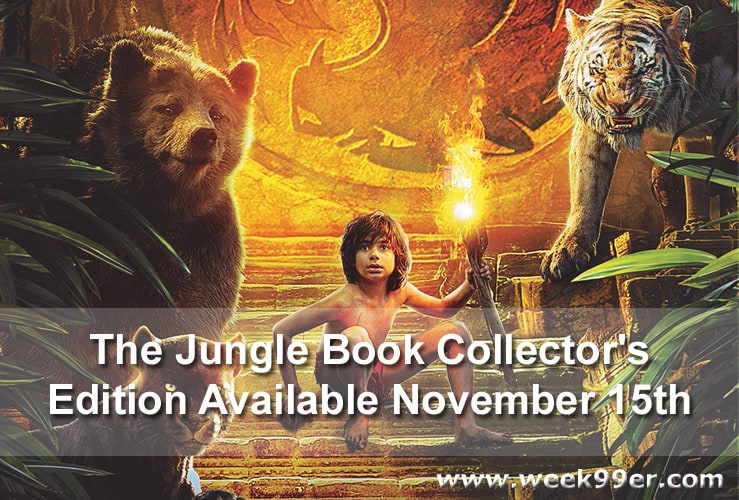 If you fell in love with The Jungle Book when it came out last year, like we did, you’re in luck! Just in time for the holiday season Disney is releasing a special three disc collectors edition of The Jungle Book that you will absolutely love. “The Jungle Book” Collector’s Edition offers more than just the bare necessities with collectible packaging and a three-disc set containing the original theatrical release on Blu-ray 3D™, Blu-ray™, Digital HD and DVD, along with originally released bonus features and five never-before-seen extras

Beginning Nov. 15, the collector’s edition of Disney’s live-action epic adventure “The Jungle Book”—Jon Favreau’s stunning reimagining of Walt Disney’s animated classic—will be available to own just in time for the holidays. “The Jungle Book” Collector’s Edition offers more than just the bare necessities with collectible packaging and a three-disc set containing the original theatrical release on Blu-ray 3D™, Blu-ray™, Digital HD and DVD, along with originally released bonus features and five never-before-seen extras.

The Collector’s Edition provides fans with unprecedented access to “The Jungle Book” production through exciting new bonus features, including a performance of “The Bare Necessities” by Bill Murray (voice of Baloo) and jazz greats Dr. John and Kermit Ruffins, an inside look at the collaboration between director Jon Favreau and renowned composer Richard Sherman on a new version of the classic song “I Wan’na Be Like You,” a fascinating feature exposing the visual effects magic behind some of the movie’s most memorable moments, an early animatic of the scene where Mowgli meets Kaa, and a global celebration as Mowgli and Baloo sing “The Bare Necessities.”

“The Jungle Book” has mesmerized audiences worldwide, earning critical acclaim and more than $965 million at the global box office to date. It boasts an unforgettable all-star cast, including Bill Murray (“Lost in Translation”) as the voice of Baloo, Ben Kingsley (“Learning to Drive,” “The Walk”) as Bagheera, Idris Elba (“Beast of No Nation”) roars as the voice of Shere Khan and Lupita Nyong’o (“12 Years a Slave,” “Star Wars: The Force Awakens”) as the voice of mother wolf Raksha. Scarlett Johansson (“Avengers: Age of Ultron”) gives life to Kaa, Giancarlo Esposito (“Breaking Bad”) provides the voice of alpha-male wolf Akela  and Christopher Walken (“The Deer Hunter”) lends his iconic voice to King Louie. Newcomer Neel Sethi stars as the film’s only human character, Mowgli.