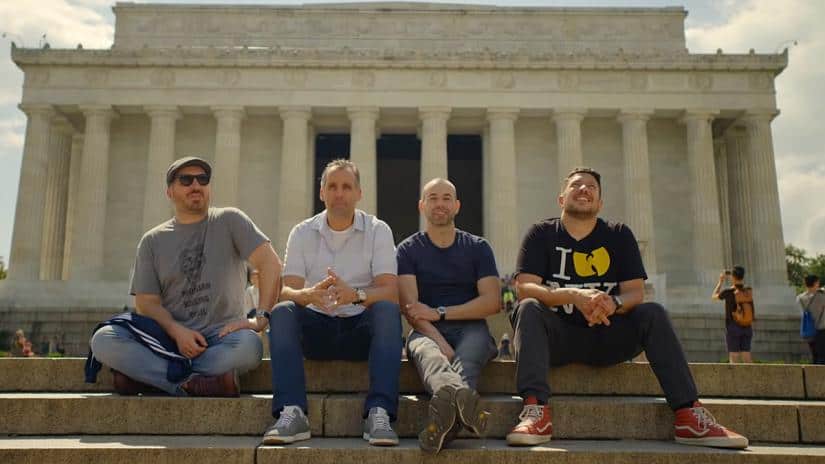 After over 200 episodes, The Impractical Jokers finally have their own movie. Made for fans of the show, the movie takes you on a cross country and multi year adventure with the four high school friends who formed the comedy group and pull pranks on each other and the people around them.

Following a made up story line of how the group got started, the four comedians are taking a road trip from Staten Island to Miami to attend a Paula Abdul concert – but they only have three tickets, so they have to compete in order to go to the concert.

While The Impractical Jokers Movie is made mostly for fans, you don’t have to be a fan to enjoy it. The movie is full of funny situations, moments where the group has to get the public to engage with them in a certain way in order to get points. From a mall Santa in the summer, to a slightly in appropriate funeral arrangements and even a birthday celebration that goes wrong. Every prank they play on each other and other people will have you laughing throughout the whole movie.

With so much bad news in the world, its time to find a movie that can make you laugh and take your mind off what is happening. While the movie is not for younger viewers, it’s a great movie to watch and laugh for a couple hours.

The Impractical Jokers movie is available on Digital everywhere now, and a great way to laugh the night away.

Warner Bros. Home Entertainment is bringing the pranks into homes this April Fool’s Day with the early digital release of Impractical Jokers: The Movie on April 1, 2020, only five weeks after its successful theatrical debut. The film, an extension of the wildly successful Impractical Jokers series, was directed by Chris Henchy (Daddy’s Home, “Eastbound & Down”). A truTV original production and produced by Funny Or Die, Impractical Jokers: The Movie carries a suggested retail price of $19.99 for the Digital ($24.99 in Canada) and is rated PG-13.“Impractical Jokers raised the stakes bringing their hijinks to the big screen and we couldn’t be more proud of their impressive box office debut,” said Brett Weitz, General Manager for TNT, TBS, & truTV. “The unwavering support of their fans prove that this comedy franchise continues to provide endless laughs and entertainment that we are pleased to bring into homes.”

“Impractical Jokers first premiered on truTV to much fanfare in December 2011 and quickly became a hit, especially among young adults,” said Mary Ellen Thomas, WBHE Senior Vice President, Originals, Animation & Family Marketing. “The power of the loyal fanbase has proven the sky’s the limit for this comedy franchise, and we are eager to bring home the laughter and antics of their first feature film for the whole family to enjoy.”“For all our wonderful fans who’ve been requesting, we’re happy to announce that Impractical Jokers: The Movie will be available in your homes to watch digitally on April 1st”, said The Tenderloins.“Hoping we can provide some laughs to families and friends at a time when we can all surely use some.” Impractical Jokers: The Movie stars James “Murr” Murray, Brian “Q” Quinn, Joe Gatto, and Sal Vulvano, also known as the comedy troupe The Tenderloins, playing themselves in a fictional story of a humiliating high school mishap from the early nineties. Featuring appearances from Paula Abdul, Jaden Smith, and Joey Fatone, the movie combines the fictional narrative with real life footage of over-the-top punishments and callbacks to classic moments from the series. Once the Impractical Jokers hit the road, they compete in hidden camera challenges for the chance to turn back the clock and find redemption.