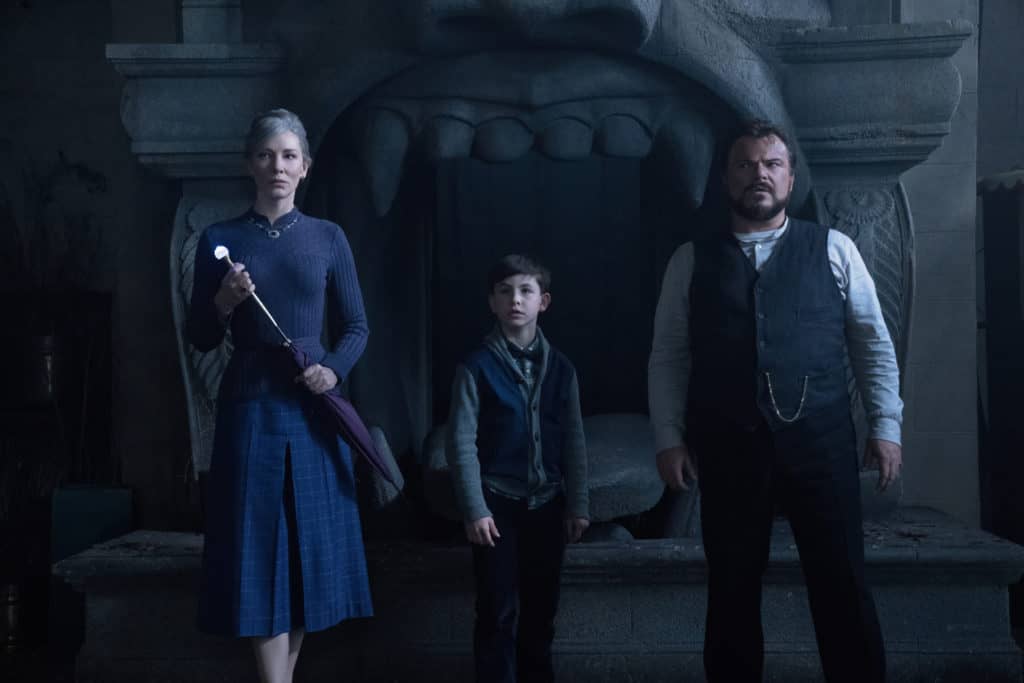 In time for the fall season, there comes a new creepy movie that kids are going to love. When we first watched the trailer for The House with a Clock in its Walls, we knew instantly we wanted to see the movie. And while we expected it to have a lot of laughs with Jack Black in the cast, we did not expect it to be as dark and creepy as it was.

The House with a Clock in its Walls is based off the book of the same name, and follows a young boy Lewis, who goes to live with his eccentric uncle after the death of his parents. While already a bit of an outcast, he finds that it’s a bit of a family thing and his uncle is more than meets the eye – he’s actually a Warlock and the house they live in isn’t haunted but magical instead. Lewis starts learning magic himself and makes a big mistake that can actually lead to major problems for him and the whole world.

Overall, the movie being based in a vaguely 1950’s era in the fictional town of New Zebedee Michigan, has a feeling of a mix of Sand Lot and other nostalgic films. But add in some creepy elements and a lot of laughs and you will find that you quickly will fall in love with the movie.

There is a of verbal sparring and insulting going back and forth between Jack Black’s character and Cate Blanchett’s, but it’s out of friendship and not just to be mean. The movie does have a couple curse words, and there are a darker scenes that younger children may get scared at. Kids over 7 and up will most likely be fine with the scarier moments. With the exception of one scene, Jack Black with a baby body, overall we enjoyed the movie and think it will be a great one to add to the line up for Halloween and any time we want a bit of a creepy film that has a comedy twist to it.

THE HOUSE WITH A CLOCK IN ITS WALLS – In Theaters Now!

The House with a Clock in Its Walls Trailer:

About The House with a Clock in Its Walls: 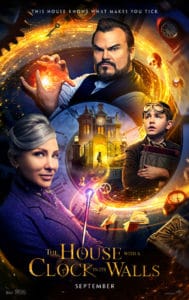 In the tradition of Amblin classics where fantastical events occur in the most unexpected places, Jack Black and two-time Academy Award® winner Cate Blanchett star in The House with a Clock in Its Walls, from Amblin Entertainment.  The magical adventure tells the spine-tingling tale of 10-year-old Lewis (Owen Vaccaro) who goes to live with his uncle in a creaky old house with a mysterious tick-tocking heart.  But his new town’s sleepy façade jolts to life with a secret world of warlocks and witches when Lewis accidentally awakens the dead.

Based on the beloved children’s classic written by John Bellairs and illustrated by Edward Gorey, The House with a Clock in Its Walls is directed by master frightener Eli Roth and written by Eric Kripke (creator of TV’s Supernatural).  Co-starring Kyle MacLachlan, Colleen Camp, Renée Elise Goldsberry, Vanessa Anne Williams, Lorenza Izzo and Sunny Suljic, it is produced by Mythology Entertainment’s Brad Fischer (Shutter Island) and James Vanderbilt (Zodiac), as well as Kripke.

Executive produced by William Sherak, Tracey Nyberg, Laeta Kalogridis and Mark McNair, The House with a Clock in Its Walls will be released by Universal Pictures. www.housewithaclock.com