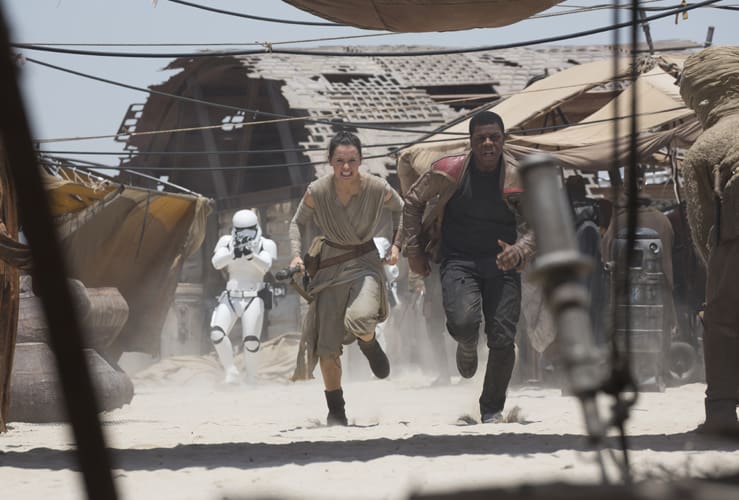 This Friday Star Wars: The Force Awakens opens nation wide to the excitement of all Star War fans and geekdom everywhere. You can’t walk down the aisles of a grocery store without seeing items for the show, and if you haven’t noticed it’s a pretty big deal. I was lucky enough to get a sneak preview of the new film yesterday, and while everyone holds their breath to see if it’s going to add anything of worth to the Star Wars universe – I can tell you it is absolutely worth going to see in the theaters.

Yes, it’s the movie that broke internet when tickets went on sale. Finding tickets in general is going to be hard for the next few weeks, but you may be wondering if it’s worth fighting the crowds to see this movie, to which I say – Absolutely yes!  Let me preface this review with saying I’m not even the huge Star Wars fan in our house. I’ve seen the original three movies, and worked at a movie theater when Episode I released. I’m not new to the franchise, but I’m also not going to put the movies on to watch just for fun – that is until I get a copy of this one.

Warning – my review below will have some plot explanation. There are some things I’m intentionally leaving out for good reason – and after you see the movie, you’ll absolutely understand why. If you don’t want any spoilers of the general plot- don’t read from this point! 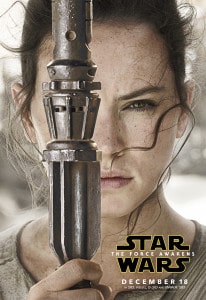 The Force Awakens takes place 30 years after Return of Jedi. The battle between the Rebel Alliance and the Galactic Empire are so far in the past that the idea of Jedis are almost a thing of myth rather than history. Despite the win against the Rebels, the powers have now been replaced by the Resistance and First Order. The names have changed but underneath the battle is the same – and in outlaying planets they hear similar stories that echo the first three movies.

The movie has pretty much everything you’d expect in a Star Wars film: from faithful droids like BB8 (who is so adorable you’re going to want one of your own), to a First Order Starship Trooper going rogue, Resistant pilots and of course scrappers. The main story revolves around Rey, who has been dubbed “The Luke Skywalker of this generation”. Unlike Luke however, Rey is a young girl scrapper from the planet Jakku who was left there as a small child. Rey is not only a strong female lead in the movie, but has just as many action scenes as the male leads. Paired with Finn (the former First Order Starship Trooper) and BB8, they go to the other end of the universe to get the information BB8 is carrying to the Resistance.

As Rey tries to get BB8 to the end of his mission, Kylo Ren (commander of the First Order and also the son of Han Solo and Princess Leia) is determined to capture the droid to get the information he wants from it. In the process he ends up capturing Rey and trying to get the information out of her. While she’s captured she ends up being able to reverse the Force that Kylo Ren is using on her, and even uses it to get herself out of captivity. Rey apparently is more than just a strong fighter. This leads to some pretty fantastic fight scenes and even a moment that will make you laugh.

Since The Force Awakens is a continuation of the original story, there are familiar faces. You can expect to see Han Solo, Princess Leia – now General Leia Organa, Chewbacca, R2D2, C-3P0 and even Luke. But with the addition of BB8, Rey, Finn, Kylo Ren and Poe Dameron the movie has a more updated feel. The original cast is there, but in more than one way they are passing the baton to the next generation of actors. The action in The Force Awakens reverts back to more physical action and acting on the part of the actors instead of relying heavily on computer animation and graphics. There is one character that is completely animated, but as a projection that can be expected. But the creatures throughout the movie are all made from the creature factory rather than through a computer.

The movie has some moments that make you laugh, a ton of action and even a lot of deaths. Overall The Force Awakens has a feeling and nods back to the original 3 movies and almost leave you with a sense that it was made that way to make up for Episodes I, II and III. From an opening that takes you back to the 70’s, instrumental music, to action created more by the actors than special effects. Star Wars: The Force Awakens brings the viewer back to the original movies and style, and will help repair any of damage that the edited versions did to the fan base.