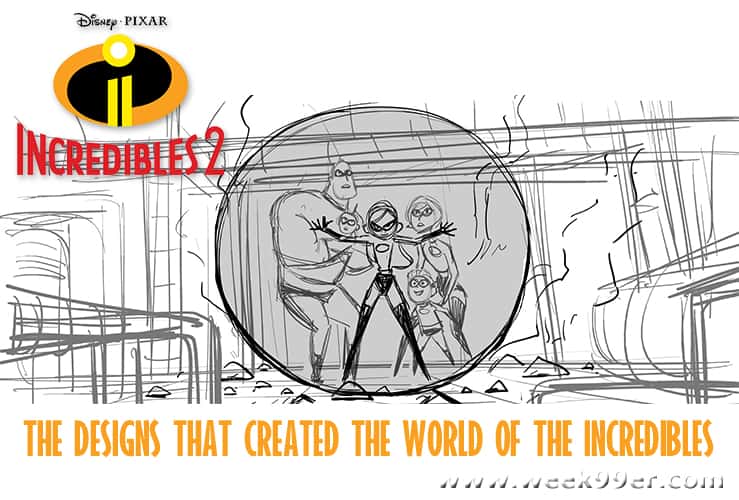 Making an animated movie is a lot different than shooting a movie. Unlike a live action film you can’t just use things that are already there. Instead, animators have to create every element in the animated movie which not only takes a lot of time but can create some unique challenges. Every animated film can take a team of hundreds of animators, artists and designers up to five years to make.

Pixar’s Incredibles 2 is no different, and while the team had some things to start with they had to basically start over when they were animating the new film. It seems incredible that a team at Pixar would not use what they already had on hand, but the reality was simple – technology has changed a lot since the first movie came out. The basics are still there, the characters we all love and know but behind that came the new animating technology and a way to move those characters into a new era with new software, new powers and of course new story lines.

How do the Characters Come to Life?

The main characters of the Incredibles including some of their super friends are already part of the world, but when creating the world artists have to create the story before it is even animated. Similar to every movie that comes to the screen, the movie is put on Storyboards. Drawings, or representations of the characters are sketched out showing the main elements of the scene. These are the main themes of the movie and continue throughout the story. This gives animators directions on where to go from there, and how the story should play out on the screen. Animators take these as guide lines and the story is handed off to the art department from there.

Story isn’t everything, well, it is incredibly important but so is how the movie makes you feel. The characters have their own set costume and colors we associate with them. But did you know that each scene is designed to set the “mood” for the viewer? Brighter colors are used during intense and happier moments, and darker colors can be scene during scary or to make the viewer uneasy. This combined with the action in the scene and even the music or sound effects help tell the story. It’s not as simple as creating a cartoon, a lot of artists have their hands in creating the movie you see on your screen.

When the animation team at Pixar went to create the characters for Incredibles 2 they had the original movie models as a reference. But they didn’t just use them and put them into a new film. Instead, they remodeled the characters and were able to create them how original animators had intended. The first animations are the characters we know and love, but technology wasn’t quite up to where they wanted it to be. Jack Jack is a little chubbier and moves more like a baby should, Violet and Dash both look a little more like kids their age should and Elastigirl and Mr. Incredible both take on the forms they were meant to.

Getting the characters in the scene is one thing, but making sure they have their iconic outfits is another. With the updated software, the animation team at Pixar didn’t just “paint” the clothes on the bodies of the characters but actually created their outfits to lay over their bodies and move with them like real clothing.

In a perfect world, animation would be perfect each time. But since technology isn’t always as forgiving as we would like and animators run animation tests throughout the process. This is why the animation team does tests of each scene at each step of the process. This way they can fix things if they have gone wrong, like the hair not staying on the body, or a piece of clothing not following along. It may be a simple fix like a missed rigging but it could be a glitch as well.

Animating the World Itself

We mentioned before that the world of the Incredibles has to be hand made, every element. And that world poses designers and animators it’s own unique challenge. The movie is set in a world in the Post War Modern era of the late 1950’s to the the early 1960’s. Thankfully this makes it easy for animators to find reference for the buildings, the furniture and even the clothing that the characters and background characters wear.

In Incredibles 2, the Parr family first finds themselves in a hotel as their home (since their last house was blown up in the original movie). This hotel room is a tribute to the Post War Modern design in furniture, accessories and even technology. It is almost an iconic space that collectors would drool over. But when they move into their new home, you see the design both literally and figuratively taken to the precipice.

The research teams visited era accurate A Frame Homes and studied the furniture that would be available in the types of homes the Parr family would live in as well as consulting experts about it. This resulted in furniture that could easily slide from the screen to the living room of any post war modern collector. After creating these elements, the teams invited some of the home owners and collectors to view clips of the movie that included the furniture and spaces for their opinion. While these scenes made us laugh during our screening of the first portion of the film, there are some that horrified some of these collectors – you’ll have to see the movie to see why they may be upset!

With characters in place, a world created and the story laid out the story has to be brought together. The animation team has to work together with the designers to make sure the characters interact well with the world around them. With fast paced action in any super hero movie, this lead to changes of how the world is laid out. What makes sense for the characters to go through and with the story line.

Even with everything mapped out, the animators and artists have to touch every last scene to make sure it’s more believable. With playing with the opacity of the glass to working on how building layouts would actually be and the right amount of dirt on an object every item is custom and made with care throughout the whole movie.

The amount of art and design that goes into every Pixar film is amazing, and why they are some of our absolute favorite movies to watch over and over again. Be sure you catch Incredibles 2 in theaters soon so be sure to get your tickets now!