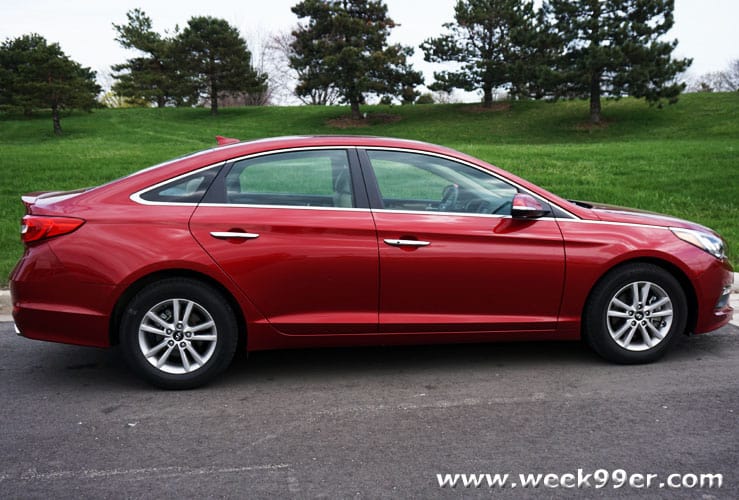 As many hours as I spend in my car, you could easily say I’m attached to it. I love the size and how many people it can fit. And like most people – I drive a SUV. It’s big, has a lot of power with it’s 6 cylinder engine and I feel safe inside it. With that being said, I love driving cars, but the transition to a sedan can be hard for the first couple days when I’m reviewing a vehicle. Besides feeling like I’m sitting on the ground while I’m driving, I always feel like I’m losing a lot of space when I review a sedan. 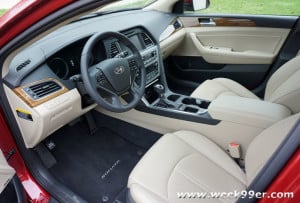 But, all of those concerns were washed away as soon as I sat in the 2015 Hyundai Sonata Eco I was given to review last week. Yes, I was still sitting closer to the ground that I tend to like, but inside were all of the features I love in my SUV and a few extras. When the car was first delivered, the driver’s seat was so far back I couldn’t even reach the pedals -talk about leg room! And even with the seat all the way back, if someone was in the back seat they would have still kept their knee caps and had space to stretch out. The amount of space inside the cabin was amazing for a sedan, especially with Eco in the name. 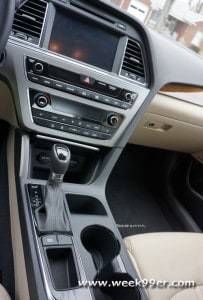 The inside of the Hyundai Sonata was spacious, filled with leather seats (that were heated!) and had just about every perk you could expect and want in a fully loaded vehicle. That is to say with the exception of a heated steering wheel, the car had everything I have become accustomed to in newer vehicles including satellite radio, cd and mp3 players, hands free calling and iPod docks and pairing capabilities. The drive shaft even has the optional manual driving mode in the automatic vehicle in case you need that extra boost of power while you’re driving.

While most cars come with a back up camera now, the Sonata Eco was the first that took it to another level (that I’ve seen that is). Most back up camera systems are fixed and show you what is straight behind you. As you back up in the Sonata, the camera will turn with you and show you what could still be hiding in a blind spot while you’re backing out to head on your way. That paired with the proximity detector (you can turn on or off) makes it an extremely safe and smart car for when you’re on the go. 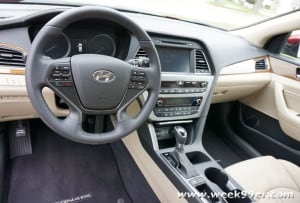 With all of the features, there are some that rank higher than others. But for me, there was one that stood out and even about other vehicles that I’ve driven with a similar feature. The car is called the Hyundai Sonata Eco because of it’s Eco mode that can save you fuel economy on every trip. This is great for in city trips, and works alright on the highway. But it also has another mode – Sport. The Sonata has a cute sports car look, and when you activate the Sport mode, you can feel the difference. Not only do you feel a boost in power, but you can hear it as you zip down the road. The Sonata Eco is only a 4 cylinder car, but with the Sport mode activated, you feel like you have the power of a much larger engine behind you. And I have to say that it’s a lot of fun to drive in that mode! Don’t get me wrong, driving the Sonata Eco in its regular mode, or even in Eco is nice, but Sport mode was a lot of fun to zip down the highways on my way to and from work. 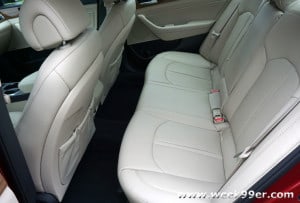 A close second for favorite feature would be the amount of space in the Sonata over all. Besides giving me and my 6′-6″ tall boyfriend plenty of leg space – anyone sitting in the back seat had that same luxury. No one felt squashed in the car, and you could easily seat 5 people comfortably for short trips around town or even longer trips. 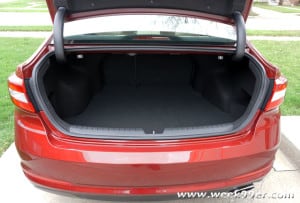 The Sonata Eco isn’t a hybrid, which some may assume due to the Eco in the name. Instead it has an more Eco friendly option to help you save gas while you’re driving around. But because it is not a hybrid it has one huge advantage for someone looking for a roomy car – trunk space! Most hybrids lose the majority of their trunk space due to the large battery that is required, this is not an issue in the Sonata Eco, and it has one of the largest trunks I’ve seen in a sedan in a while.

There are very few sedans I would happily trade in my SUV for, but the Sonata Eco tops the list! Besides the amount of space, the car was averaging 32 miles per gallon, and was an absolute blast to drive. This car was actually hard to give back to Hyundai when they came and picked it up this week. With a starting price of $21,000 and around $28,000 fully loaded the Sonata Eco isn’t as expensive as a lot of other comparable models.