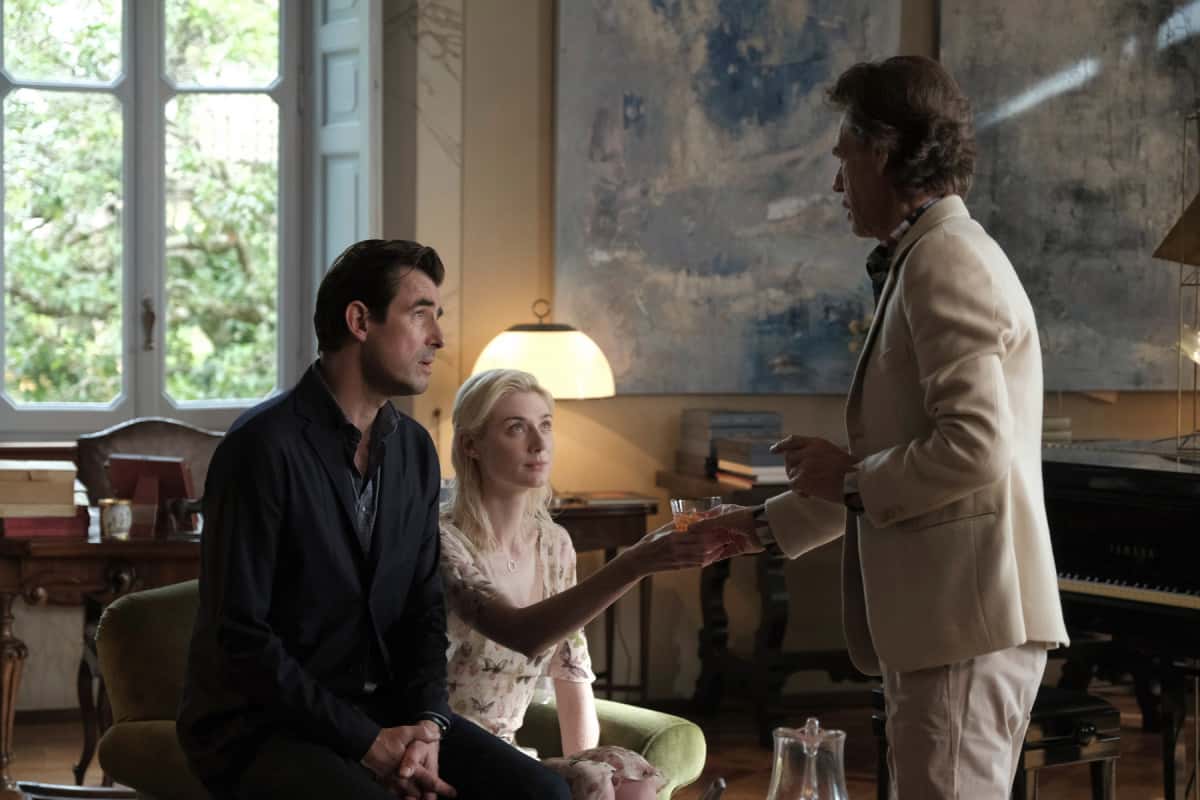 Touting itself as a neo-noir story, The Burnt Orange Heresy is making its way to the theaters this year. The movie, based off the book of the same name by author Charles Willeford, takes you on an ambling story about a disgraced art critic and what lengths he will go to to get his reputation back. With names like Claes Bang, Elizabeth Debicki, Mick Jagger and Donald Sutherland the movie brings to it big names and star power – but that’s about where it ends.

The dark and twisted art world seems to be a theme we keep seeing in movies, and while some have held their own, even from their own book adaptation. The Burnt Orange Heresy seems to be use it as a loose guideline to tell a story of a (only halfway believable) bad guy with his own agenda.

When Berenice (Debicki) shows up in the story, she wanders into an art lecture given by James (Bang), and without hesitation, winds up in bed with him the same day. After just a few days she goes off with James to a villa to meet a collector and an artist. Some of her back story is revealed, but it just feeds into a patterns he shows in the story – bad decisions. Following a man to an unknown location, which at that point actually isn’t the worst decision she makes with him. Her unassuming trust in a man she has just met is unrealistic and has disastrous results – which may be one of the only realistic parts of the film.

I’m not sure if the art world is as salacious as the movies try to make it out to be, and if the majority of artwork is actually fake as they imply. But the movie itself wont be finding itself in any gallery any time soon. The pacing over all is slow, with weird framing. Many scenes reminds you of a slower television show you might see on an off channel and has several scenes where the focus is too soft and depth isn’t actually achieved. The lack of believabity of the story makes you wonder why this story was brought to the screen.

However, with all of it’s faults, The Burnt Orange Heresy does excel in one area – banter. While the premise of the movie is unbelievable and several situations are quite contrived – the characters actually have some great back and forths. The dialogue, at times, is quick witted and funny. But, that being said – I’m not sure that’s enough to make this movie a quick favorite for audiences.

About THE BURNT ORANGE HERESY:

Charming and ambitious art critic, James Figueras (Claes Bang), has fallen from grace. He spends his days in Milan lecturing witless tourists about art history. His only glimmer of hope is a newfound love interest, the enigmatic American, Berenice Hollis (Elizabeth Debicki). An opportunity strikes when he is contacted by wealthy art dealer Joseph Cassidy (Mick Jagger) who summons James to his villa on Lake Como and asks him to steal a painting from the legendary reclusive artist, Jerome Debney (Donald Sutherland). Soon, James’ greed and ambition get the better of him, and he finds himself caught in a web of his own making. (SONY PICTURES CLASSICS)

This film is rated R.