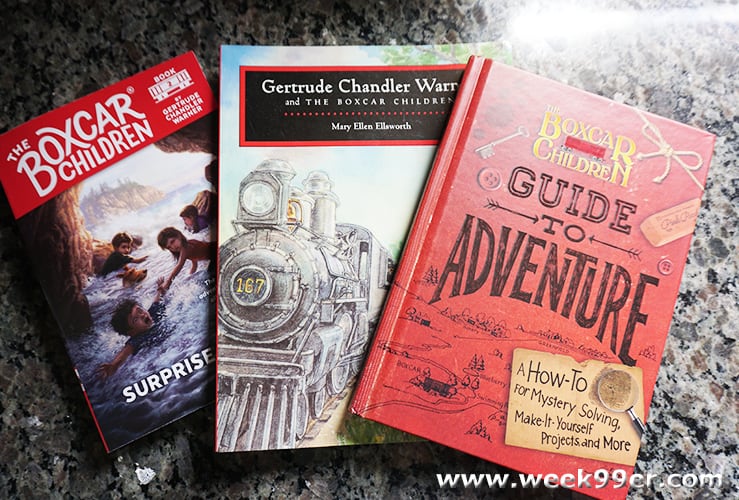 We grew up reading the adventures of The Boxcar Children, the orphans that solve mysteries and take adventures that we can’t help but get wrapped up in. And now one of these adventures has an all new animated movie based on the book, and is coming to theaters for a special one day event on May 8th! We loved these stories growing up, and love the fact the books are still favorites for kids. The film is based on one of the books from the beloved series by Gertrude Chandler Warner and is family-friendly for all ages, with a recommendation for kids 3-13. With hundreds of theaters across the nation booked, there will likely be a theater near you offering up the film.

Want to check the movie out? Get your tickets here! And read more about the film and how you can win a set of the books below!

The beloved Boxcar Children are headed to the silver screen! The new animated feature film THE BOXCAR CHILDREN – SURPRISE ISLAND hits theaters nationwide for a special one-day event on May 8. 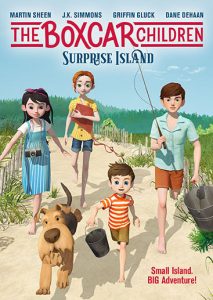 This exciting after-school event is a partnership between Fathom Events, Shout! Kids, and Legacy Classics, and it will also offer moviegoers an exclusive introduction with actor Griffin Gluck and Director Dan Chuba explaining the process of adapting the book to film, and the process of animating. Moviegoers will be able to enjoy the film in approximately 700 select U.S. movie theaters. A complete list of theater locations will be available at Fathomevents.com. Tickets for THE BOXCAR CHILDREN – SURPRISE ISLAND will go on sale Friday, April 6, and can be purchased online or at participating theater box offices.
THE BOXCAR CHILDREN – SURPRISE ISLAND, the highly-anticipated movie adaption of the popular children’s book of the same name, stars Golden Globe®-winning actor Martin Sheen (The West Wing) as James Alden, Oscar®-winner J.K. Simmons (Whiplash) as Dr. Moore, Dane DeHaan (Valerian and the City of a Thousand Planets) as the mysterious Joe, Joey King (Independence Day: Resurgence) as Jesse Alden, Carter Sand (Frozen) as Benny Alden, Gil Birmingham (Twilight) as Lonan Browning, Griffin Gluck (Middle School: The Worst Years of My Life) as Henry Alden, Stephen Stanton (Star Wars Rebels) as Capt. Daniel and Talitha Bateman (The 5th Wave) as Violet.
THE BOXCAR CHILDREN – SURPRISE ISLAND follows the adventures of the orphaned Boxcar Children as they spend an entire summer living on their Grandfather’s small, nearly uninhabited island. There they meet Joe, who is friendly and helpful, and inexplicably living on their island. Does their new friend have a secret?
THE BOXCAR CHILDREN – SURPRISE ISLAND is fun for the whole family, and is Dove approved for all ages. It is directed by Dan Chuba and Mark Dippé, and is produced by Legacy Classics and co-produced by Shout! Factory, Albert Whitman & Company and Blueberry Pictures. THE BOXCAR CHILDREN – SURPRISE ISLAND is the first of three new animated features to be adapted from the “The Boxcar Children” book series, as part of a partnership between Shout! Kids and Legacy Classics.
“The Boxcar Children” by Gertrude Chandler Warner is one of the best-selling children’s book series of all time. Having just marked its 75th anniversary, over 70 million books have sold world-wide. There are 150 books in the series, and over 1 million kids read the books in schools across North America every year.

One of our readers is going to win a Boxcar Children Three book set! They are Guide to Adventure, Gertrude Chandler Warner and The Boxcar Children and the novel Surprise Island, on which the film is based.
How Can You Win?
Enter to win with the form below. Let us know what is your favorite story from The Box Car Children? Who will you share this book set with if you win? If you do not do this entry – you will not win! So make sure you leave a comment and then enter using the form below!
Entry-Form